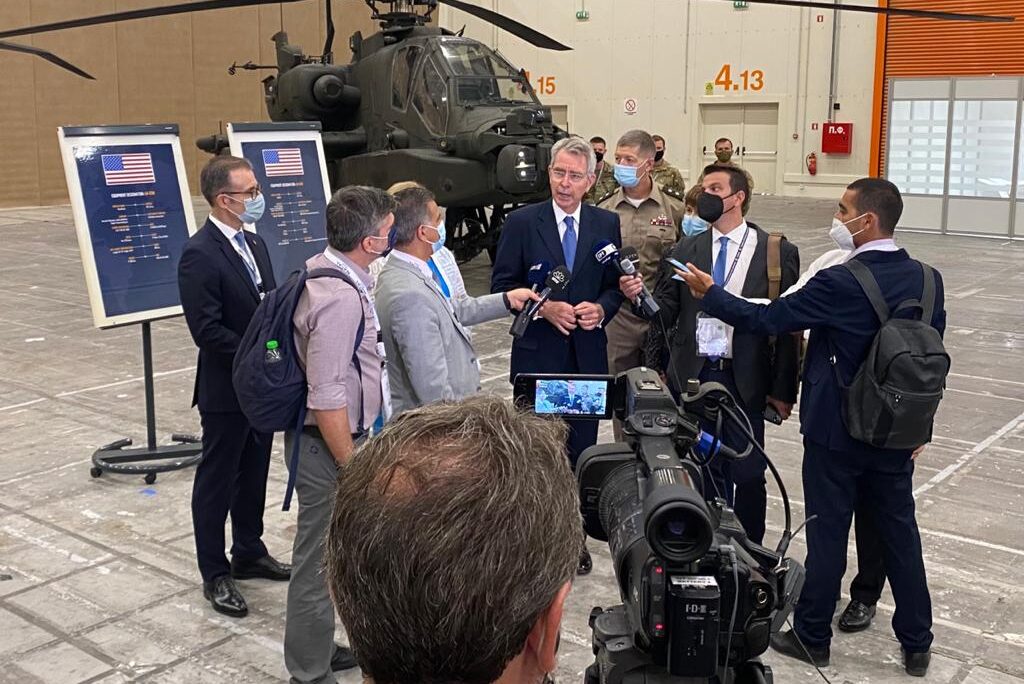 Kalimera sas.  Let me start by saying thank you to Heidi Grant, General Jarrard, and the whole team that stands behind the very senior U.S. delegation here.

I also want to say a huge congratulations to all of our partners at the Hellenic American Chamber of Commerce in Greece, starting with my dear friend Nikos Bakatselos.

I said to General Jarrard this morning how deeply grateful I am to U.S. Army Europe and Africa in particular.  We have another big rotation through the Port of Alexandroupoli going on right now today, building on all of the progress that we’ve made in Northern Greece, the exercises that we conducted in Petrochori just a few weeks ago, where Minister Stefanis and General Floros and I, and General Cavoli had the opportunity to see our forces working together.

This is a trade show, and a trade show wouldn’t be complete without examples of the equipment and services that U.S. vendors are providing.  But I want to emphasize that the U.S. relationship with Greece is not just about hardware.  It’s about how our forces work together, and the partnerships they enjoy.

I was very proud just now to be talking to a couple of our soldiers who are part of one of the rotational deployments currently in Romania.  They flew the Blackhawk down here.  They will be back out at Megara with their Hellenic Armed Forces counterparts this weekend.  And they were talking about the fantastic support that they’ve enjoyed from their Hellenic Armed Forces counterparts.

The Blackhawk is from the same family of aircraft as the MH-60 Romeos, which the Hellenic Navy will soon acquire, giving Greece one of the strongest maritime domain awareness capabilities in NATO.

The Apaches behind us are another platform operated by the Hellenic Army.  I’ll be talking to Boeing later tomorrow about the work that they’re doing on the modernization of those systems.

I was very proud with Minister Panagiotopoulos and General Lalousis, and Minister Stefanis to step up onto the M1117, the armored vehicle which Greece is acquiring through our Excess Defense Articles programs.  In fact, I was told that that vehicle over there is actually a Greek vehicle and will be returned to Germany for preparation and then will be part of the large consignment that the Greek Armed Forces will acquire, improving the readiness and the capabilities of the Hellenic Armed Forces.

And then just in front of us here is the JLTV from Oshkosh, which I’m looking forward personally to having the opportunity to drive around a little bit later today.  It is also another system that the United States is offering to Greece in support of, in particular, the really thriving relationship between our Special Forces.

So this is, as Heidi said, a moment of extraordinary accomplishment in the U.S.-Greece defense relationship, but I want to be very clear that we are not resting on our laurels.  We are continuing to move forward.  We have the General Atomics MQ-9s which are exhibited today, a system that we’re discussing with the Greek government.

I am convinced still that the Hellenic Future Frigate, the offering that Lockheed Martin is putting forward for the Greek frigate procurement, represents the single most competitive option available to Greece currently, in particular because of Lockheed Martin’s commitment to a strong partnership with my friend George Prokopiou, who has now acquired the Skaramangas shipyard, and the U.S. desire to be part of the renaissance of Greek shipbuilding at Skaramangas, and then of course all of the other U.S. companies and service providers that are here today.

So efcharisto poli to all of you for paying some attention to this.  And I also want to say how deeply honored I am that Minister Panagiotopoulos took some time out of his schedule, unprogrammed, to walk through and say hello to some of our soldiers and see what we’re doing.  Because we’ve accomplished a great deal with his support, with the Prime Minister’s support, and we’re not finished yet. Efcharisto poli.