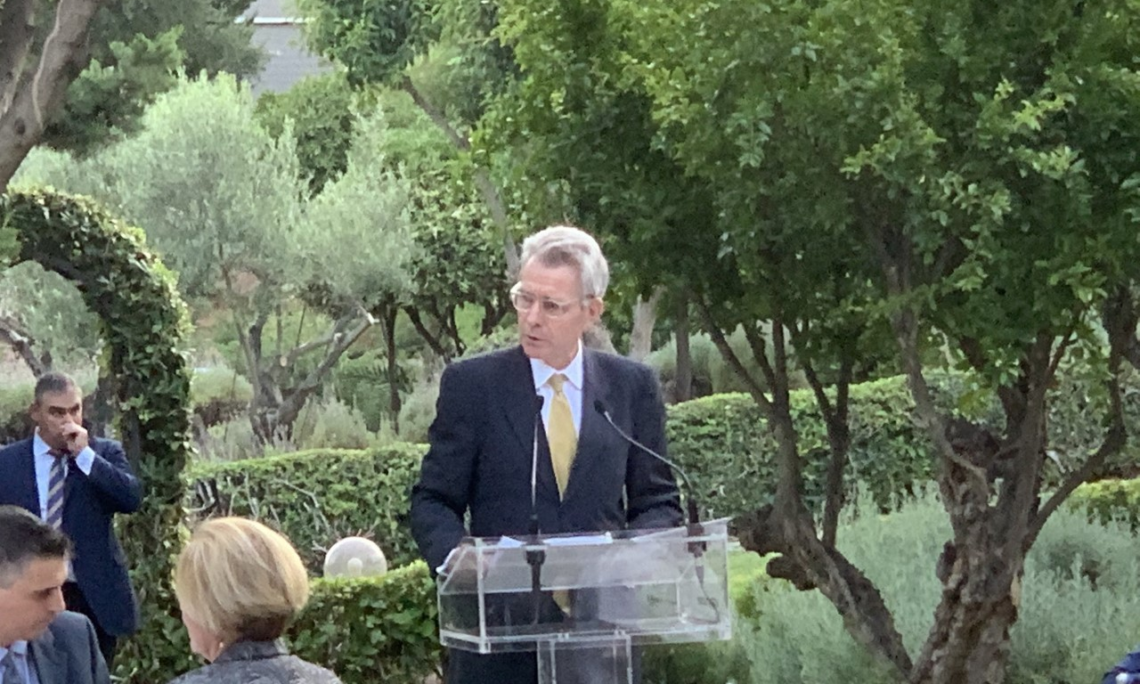 Kalispera sas, and welcome to this sublime setting of the Gennadius Library garden here in Athens on this beautiful summer evening.

I want to start by expressing my appreciation to all of our senior Greek guests this evening — Minister Kikilias, Minister Dimas, former Minister Koumoutsakos, Lieutenant General Fasoulas — thank you very much for honoring us with your presence here this evening.

I also want to say want to say a huge thanks to Nikos, Elias, and the whole team at AmCham for everything that you have done to organize the American Pavilion at DEFEA 2021.

AmCham has been our most important partner in highlighting the opportunities of the U.S.-Greece trade and investment relationship, and in particular helping to strengthen Greece’s position as a pillar of stability and a leader on energy, innovation, and defense here in this region.

As we did together at the Thessaloniki International Fair of 2018 that Nikos talked about, AmCham has assembled an impressive group of leading U.S. defense and security companies for our pavilion this year, which is further enhanced by the vehicles and helicopters which the U.S. Army in Europe brought down to Athens for this event.

I also want to say a huge thanks to my Embassy team from all the sections of our Mission who contributed to the hard work that made our Team America approach so successful.  Three years ago, after the 2018 Thessaloniki Fair, David Burger’s predecessor as DCM made me promise that we would never try to do something like this again.  And I apologize, the statute of limitations has passed, and we’ve done it again.  So thanks David, and thanks to the whole team.

I also want to say a very special thank you and welcome to our leadership team from the U.S. Department of Defense: Heidi Grant, the Director of the Defense Security Cooperation Agency; Deputy Assistant Secretary of the Army for Defense Exports and Cooperation Liz Wilson; and Major General Joe Jarrard, the Deputy Commander of the U.S. Army in Europe and Africa.  Thank you for all for the fantastic leadership that you’ve provided for this event!

The U.S. Pavilion at DEFEA showcases the best in American defense technology, bringing together key defense and security industry professionals and providing a platform for networking and the exchange of ideas, further expanding the defense and commercial ties between our two countries.

I’m very proud to say that today, the U.S. defense and security relationship with Greece is one of the strongest in Europe.  It is also one of the strongest pillars of our overall strategic agenda.  Our strengthened military-to-military cooperation has been institutionalized, in particular, over the past two years as a result of the updated Mutual Defense Cooperation Agreement (MDCA) on which Minister of Defense Panagiotopoulos led the charge.

And now, both of our governments, at the highest level, are committed to enhancing and deepening the MDCA, reaffirming our resolve as Allies to advance joint security goals – in this region and beyond.

The past few months have been full of joint exercises, troop rotations, and ship visits, including our major DEFENDER-Europe 21 exercise in Eastern Macedonia and Thrace.  I want to single out and applaud the leadership of Minister Kikilias in this regard, because without Greece’s success jointly in our effort against the COVID pandemic, we wouldn’t be able to do what we’ve been doing with our Hellenic Armed Forces partners in recent months.

Defender-Europe, in particular, illustrated the critical role that the Port of Alexandroupoli now plays as a logistics hub for the U.S. military and NATO, projecting power and resources into Eastern Europe and the Black Sea regions.  Indeed, just this month of July, Alexandroupoli will host three major force rotations with three separate ship arrivals, moving more than 700 pieces of military equipment.

American industry plays a key role in our defense cooperation as the United States seeks to support the Greek government’s modernization of its forces after a decade of economic crisis.  I’m very proud that world-leading U.S. defense technology is helping Greece to upgrade its capabilities and strengthen interoperability, including through the F-16 Viper upgrade and P-3 modernization programs.  Greece’s purchase of seven Lockheed Martin Sikorsky MH-60 Romeos, the world’s leading anti-submarine and anti-surface warfare helicopters, will give Greece an unmatched maritime domain awareness capability.

And let me be clear, the United States is 100% committed to our bid for the Hellenic Navy’s Frigate Modernization Program, which represents a once in a generation opportunity to deepen and sustain our naval partnership.  I know that this bid is also the top priority for Lockheed Martin and for the U.S. Navy, which stands behind absolutely the second-to-none proposal that the United States has brought to the table.

I am also very glad that we have a large team here from Boeing, focused on significant new programs around the Chinook and Apache platforms, as well as Boeing’s wide portfolio of civilian aircraft.

We are extremely excited that the U.S.-Greece Defense and Interparliamentary Partnership Act was recently introduced by Senators Menendez and Rubio, enhancing further the opportunities for progress in our defense relationship, increasing our forces’ interoperability and further advancing our strategic relationship.

Meanwhile, with the help of our partners at AmCham, our trade and investment ties are making great strides, as an increasing number of top-tier U.S. technology and innovation companies are coming to call Greece home.  Microsoft, to take one critical example, is investing hundreds of millions of dollars in a complex of cloud data centers around Athens.  And in the north, Pfizer, Cisco, and Deloitte are expanding their presence in Thessaloniki, helping Greece realize its vision of becoming a digital hub for southeast Europe.  In Patras, Advent Technologies has put Greece at the center of efforts to develop clean hydrogen power.  And on the island of Syros, ONEX and Cisco are leading the rebirth of shipbuilding with a focus on high technology.

In May, I had the opportunity to visit the Greek company Aeroservices for its delivery of the first Hellenic Navy S-70B helicopter to undergo scheduled maintenance and overhaul at their facility.  Sustainment and upgrade programs like this have created new partnerships between Greek and U.S. defense companies, establishing a fully certified, advanced-level repair capability for Sikorsky helicopters here in Greece and developing the private sector’s defense industry capabilities.

This is great news for Greece because it contributes to a self-sufficient Hellenic Navy and provides the high-end technical jobs that the Greek industry seeks and which I know Minister Dimas is committed to supporting.

Growth in the defense sector, however, flows both ways, as Greek defense companies like EFA Group’s Theon Sensors are now investing in the United States and providing night vision technology to the U.S. Marine Corps.

But I want to close by emphasizing something that Director Grant said, which is that our security relationship with Greece is not just about hardware.  It’s about a commitment to a long-term partnership, based on shared strategic interests and values that have united our countries now for 200 years.

A stronger and more secure Greece is not just in America’s interests.  Our work together deepens important regional relationships and strengthens the NATO Alliance.  Over the past five years, I have been proud to be part of a dramatic expansion of U.S.-Greece defense ties that has made this one of the strongest aspects of our relationship.  And I am confident that there is much more that our countries will accomplish together, making both the region and the wider international community safer and more secure, and implementing President Biden’s vision to build the strongest U.S.-Greece relationship that we have ever enjoyed.

I know that everybody on my team at the Embassy looks forward to working with the Greek government to build on the gains of recent years and to meet all of the goals that the Biden Administration has set for our relationship.  Thank you for your partnership in this endeavor and efcharisto poli.