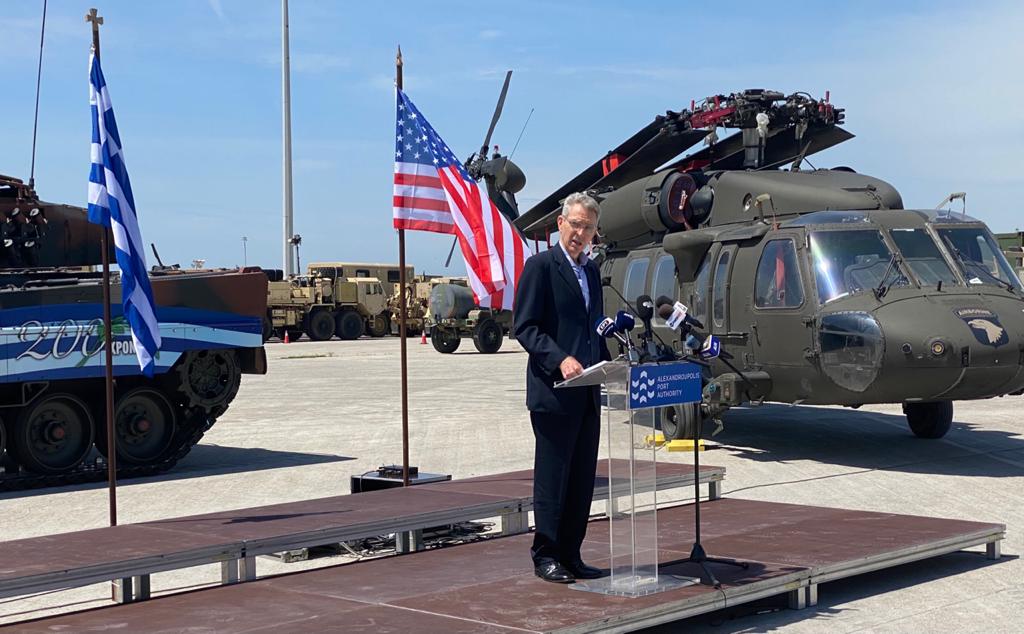 Kalimera sas.  I want to start by thanking my friend, Defense Minister Panagiotopoulos, for coming up to Alexandroupoli today for this event.  But also to reflect, as we were discussing on the aircraft flying up this morning, on the spectacular progress that we have achieved in our defense relationship since the Minister and I first came to Alexandroupoli together in September of 2019, around the removal of the sunken dredger Olga.  I think we should all be enormously proud of what we have accomplished together here in Alexandroupoli and the transformative strategic impact of the work that we’ve done together.  So thank you, Minister, for just being a fantastic partner and ally in this effort.

I also, of course, want to acknowledge all of our partners from the Hellenic Armed Forces, especially General Floros, General Lalousis, General Choudeloudis, General Papastathopoulos, as well as the many other friends and allies who are here today: several MPs, Governor Metios, Deputy Regional Governor Petrovits, Mayor Zamboukis, Bishop Anthimos, Your Eminence, and Port President Chatzimichail for joining us today and for all that we have done together to reach this point.

I need to say a special thank you to two key stakeholders in Operation DEFENDER-Europe 21: U.S. Army General Mohan and U.K. Brigadier General Chestnutt, whose teams, in coordination with the Hellenic Army 12th Division, are doing tremendous work to support the transit of forces through this port, and to demonstrate the interoperability between our forces.

I’m so happy to be back in Alexandroupoli as we celebrate the Greek bicentennial and 200 years of friendship between the United States and Greece, as well as what I consider to be another historic milestone for the Port of Alexandroupoli and for the U.S.-Greece defense and security relationship.

The many joint exercises and ship visits we’ve conducted in recent weeks, which General Floros alluded to, highlight the accelerating tempo of our military-to-military relationship, which is anchored in our updated Mutual Defense Cooperation Agreement.  These engagements show the whole world that Greece and the United States stand shoulder to shoulder, together in support of regional peace and stability, just as we have done for the past two centuries.

DEFENDER-Europe 21 in particular highlights Alexandroupoli’s strategic location and the critical asset that this port represents.  This large-scale U.S. Army-led exercise, consisting of more than 28,000 multinational forces from 26 nations, is designed to build readiness and interoperability between the United States, NATO Allies, and partner militaries over a wide area of operations.

In addition, DEFENDER-Europe 21 will include significant involvement by the U.S. Air Force and U.S. Navy.  This exercise will utilize key ground and maritime routes bridging Europe, Asia, and Africa, showcasing Greece’s critical geographic position at the nexus of three continents.

We appreciate Greece’s willingness to stage, host, and participate in this important exercise, which demonstrates the ability of the U.S. Army in Europe and Africa to serve as a strategic security partner in the western Balkans and Black Sea regions, as well as our iron-clad commitment to our NATO Alliance.  As this exercise shows, the United States will remain present in the Balkan and Black Sea regions in order to provide deterrence against potential adversaries in defense of our allies.

As part of DEFENDER-Europe 21, I look forward later to visiting Xanthi and Petrochori for the exercise IMMEDIATE RESPONSE/CENTAUR 21.  There, U.S. and Hellenic Army units will train together, which includes more than 5,000 troops from 11 countries spread out across 31 training areas in southeast Europe.

Together with the immense movement of troops and equipment through Alexandroupoli for DEFENDER-Europe 21, we also have forces in the region supporting the ongoing Operation Atlantic Resolve, which included the deployment of the 1stCAB to Europe through Alexandroupoli in February, and the redeployment of the 101st CAB that began in March and continues now, concluding next week when 41 helicopters will transit back to the United States.

The confluence of these exercises and the sheer volume of military activity now happening in this port underscores Alexandroupoli’s growing strategic importance to Greece, to the United States, and to our alliance.  It also further validates the investment that the U.S. Army in Europe and EUCOM have made in the Port of Alexandroupoli for the removal of the sunken dredger Olga.  The Olga’s removal improved access, flexibility, and capacity at the port, enabling us to welcome the ARC Endurance and other large ships such as the Liberty, which just left last evening.

I’m very proud, as I discussed today with the chairman, that we have two strong U.S. bidders, BlackSummit and Quintana, that are pursing the privatizations in Alexandroupoli and Kavala.  These ports support critical energy infrastructure in the region, including the Alexandroupoli floating storage and regassification unit, which is on track for a final investment decision with construction starting later this year.

The FSRU is an important example of Balkan cooperation to diversify energy sources and routes.  Greece and Bulgaria are both shareholders in the FSRU, and North Macedonia now seeks to become a shareholder as well as joining Serbia, Bulgaria, and Greece in booking capacity in that facility.

I’m also very proud that there’s now a U.S. ownership stake in Gastrade, the company that’s developing the FSRU.  We hope very much that some of the FSRU contracts will go to American LNG suppliers, building on last year’s trendlines and the important role that LNG plays as a bridge fuel to the greener future that Prime Minister Mitsotakis and President Biden have committed to pursue.

The FSRU and the Alexandroupoli natural gas power plant are also important tools for reaching Prime Minister Mitsotakis’ ambitious climate change goals.  They will enable Greece to be among the early countries to phase out lignite coal power.  This is an important step and an example for the rest of the world, one which the U.S. International Development Finance Corporation is interested to support.

So as we mark the 200th anniversary of the Greek war of independence, I want to thank the Greek government for its steadfast commitment to regional security, and in particular, its support of U.S. and Allied military operations.  Our countries have stood together as friends and allies for two centuries, and the work of American philhellenes continues today with the deployment of U.S. forces through Alexandroupoli, reaffirming our commitment to advancing our joint defense and security goals.

Our bilateral Strategic Dialogue and our updated Mutual Defense Cooperation Agreement will continue to offer opportunities for mutually beneficial collaboration as we take our alliance to the next level under President Biden’s leadership.

Throughout history, a stronger and more secure Greece has been important also to America’s interests, and enhanced defense cooperation between our two democratic nations deepens our bilateral relationship, strengthening the NATO Alliance, and promoting safety and security in this strategically dynamic region.  Efcharisto poli.