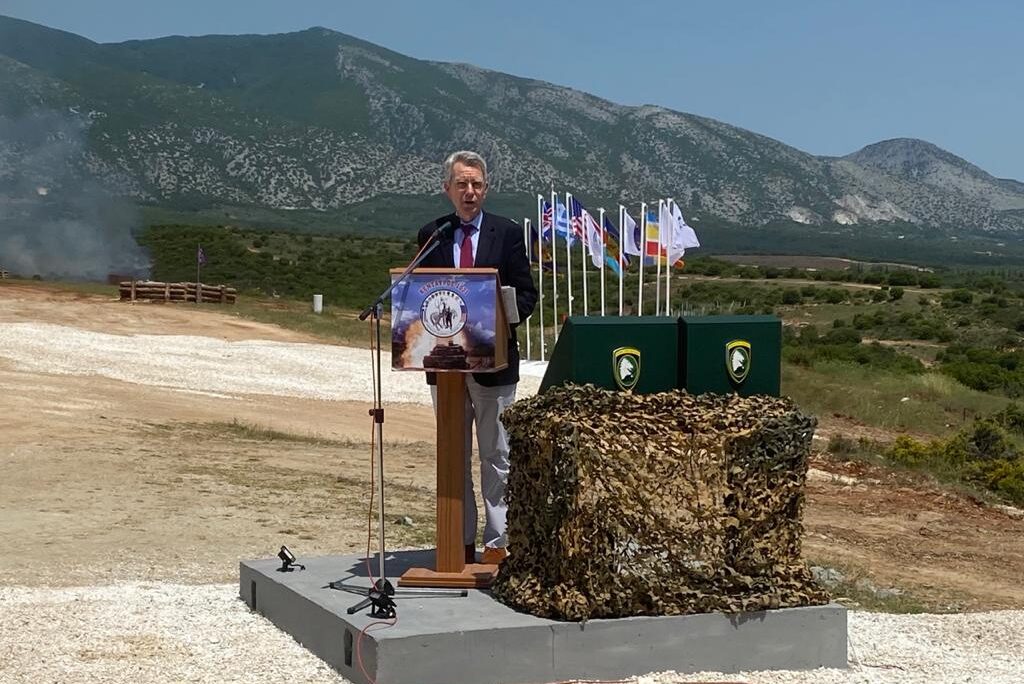 Kalimera sas.  I want to start this afternoon by thanking Deputy Minister Stefanis for giving us a lift up to Petrochori so we could observe this exercise and the final phase of the bilateral U.S.-Hellenic Army exercise IMMEDIATE RESPONSE/ CENTAUR 21 as part of DEFENDER-Europe 21.

Minister, you’ve been a fantastic friend, and so much of what we’ve accomplished was on display today, so thank you again.

I also want to acknowledge all of our partners from the Hellenic Armed Forces, especially Vice Admiral Drymousis, General Lalousis, General Choudeloudis, as well as the many other friends and allies who are here today.  Thank you all for joining us this morning and for the transformative work that we have done together to reach this point.

And I want to say a special thank you as well to a few key stakeholders in today’s exercise: first and foremost, General Cavoli, Commander of U.S. Army forces in, Europe and Africa. Thank you, sir, for your continued efforts to deepen the alliance between Greece and the United States.

I’ve lost track of how many times General Cavoli has been in Greece, but I can tell you that since the beginning of 2018, he has been a fabulous partner for all of us as part of Mission Greece.  And much of what we have accomplished in the military-to-military relationship rests on his shoulders.  Thank you.

I’m also pleased to see here today Lieutenant General Wooddisse.  I hope very much that we will continue to see the United Kingdom’s involvement in these exercises with our Hellenic Armed Forces partners.

And I was very glad to see the 1-131 Aviation Battalion’s Blackhawks back in action here, supporting their Alabama National Guard counterparts.

And last but not least, I want to commend Major General Gordon, Brigadier General Presley, Lieutenant Colonel Craft, and Sergeant Major Birchfield for their presence and the presence of the 1-167 Infantry Battalion in today’s exercise. Your air crews that I met a few weeks ago at Alexandroupoli were fantastic ambassadors for the United States, which I know is a reflection of your strong leadership and a point of pride for the state of Alabama.  And let me in this regard also echo General Cavoli’s congratulations and admiration for all that you’ve accomplished in a relatively brief time here in Xanthi.

When Minister Panagiotopoulos and I visited the Port of Alexandroupoli earlier this month, we were able to welcome the troops and equipment that were transiting the port for DEFENDER-Europe 21.  This large-scale, U.S. Army-led exercise, consisting of more than 28,000 multinational forces from 26 nations, highlights the critical importance of NATO’s southern flank.

And it’s worth noting that Greece is one of only four participating countries whose port was used to deploy equipment into Europe.  And Greece is also one of four countries hosting a DEFENDER-Europe 21 logistical center. These facts demonstrate Greece’s important strategic role and what a critical asset the Port of Alexandroupoli represents, and why you have seen the United States, including U.S. Army Europe and Africa, so active and engaged in this region of Thrace.

In particular, this exercise is the third time that the Petrochori Training Area has been utilized for bilateral and multilateral training in the past year.  The Hellenic Tank Challenge took place here last fall, and exercise Thracian Cooperation took place here in the spring.

IMMEDIATE RESPONSE/CENTAUR 21 marks the largest U.S. Army contingent to train in Petrochori, highlighting our growing cooperation with the Hellenic Army, and specifically with the D Corps headquartered in Xanthi.

The defensive operations we just witnessed build interoperability and operational efficiency between the U.S. and Hellenic Army units as part of the larger multilateral exercise, which includes more than 5,000 troops from 11 countries spread out across 31 training areas.

Under our updated U.S.-Greece Mutual Defense Cooperation Agreement, the United States is committed to deepening our military-to-military relationship with Greece, to the benefit of both our countries and the NATO Alliance.

We’ve demonstrated the value of training together at Petrochori.  And I’m proud to report that the U.S. Army Europe and Africa’s 7th Army Training Command, working with the Hellenic Army, has made substantial enhancements to the range as part of these exercises, as well as during IMMEDIATE RESPONSE/CENTAUR 21.

We hope to participate in two more exercises here before the end of the year: Olympian Cooperation and the 2021 Hellenic Tank Challenge.

So I want to thank Greece for its leadership in staging and hosting this important exercise, which demonstrates the ability of U.S. Army in Europe and Africa to serve as a strategic security partner in the Eastern Mediterranean, Western Balkan, and Black Sea regions, as well as our ironclad commitment to our NATO Alliance.

I would also highlight Greece’s participation in other Balkan countries for DEFENDER-Europe 21 exercises, including DECISIVE STRIKE in North Macedonia and SABER GUARDIAN in Bulgaria.

DEFENDER-Europe 21 sends a message to the world that the United States and Greece are standing shoulder to shoulder to promote peace and stability.  As we commemorate the 200thanniversary of Greek independence, I want to thank the Greek government for its commitment to U.S. and Allied military operations.

As General Lalousis reminded us, our countries have supported each other as friends and allies for two centuries now.  And both of our governments, at the highest level, are committed to extending the duration and reach of our Mutual Defense Cooperation Agreement, reaffirming our resolve to advance joint security goals.

As today’s exercise demonstrates, we are stronger together.  A stronger and more secure Greece is important to America’s interests in this region.  And we look forward to taking our alliance to an even higher level under the Biden-Harris administration, promoting safety and security on NATO’s critical southeastern flank.

But our security relationship is not just about hardware.  It’s about a commitment to a long-term partnership, based on shared strategic interests and values that have united our countries now for 200 years.

When the United States and Greece work together, as we’ve seen today, there is no limit to what we can accomplish.  And both the region and our alliance are safer and more secure as a result.  Efcharisto poli.