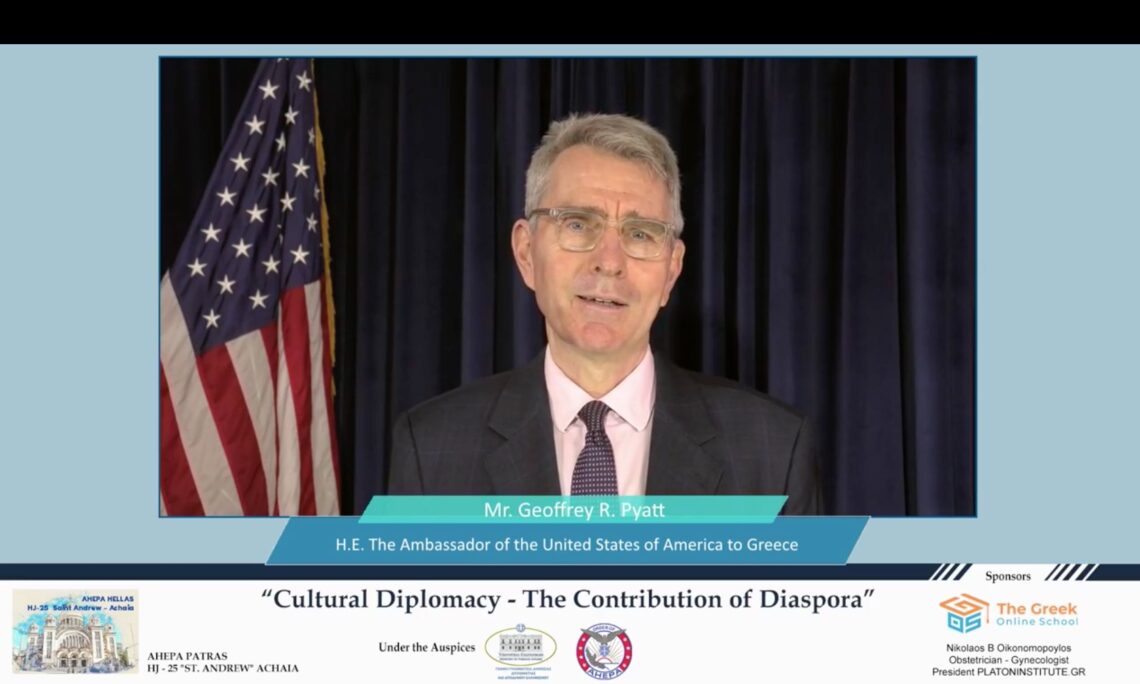 Καλημέρα and thank you to Achaia AHEPA and Dino for inviting me.

It’s a great pleasure to be with you, and to have the opportunity to talk about one of the most important drivers of the U.S.-Greece relationship: our strong people-to-people ties and the vital role that the Greek American diaspora plays in advancing our shared goals.

Here at the Embassy, we’ve just kicked off our campaign to commemorate the bicentennial of the Greek Revolution.  We’re calling it, “USA & Greece: Celebrating 200 Years of Friendship.” Our countries have been intertwined from the beginning, linked by the democratic values that generations of our citizens have pledged to uphold and defend.

Our deeply ingrained belief in equality, human liberty, self-government, and rule of law are the basis for the philia between our countries, which is rooted in honor, commitment, and mutual respect.

Nurturing and strengthening the bonds between our peoples is central to the work we do at the American Embassy.  In fact, these ties are so important that we’ve enshrined them as one of the pillars of the U.S.-Greece Strategic Dialogue, alongside regional cooperation, defense and security, law enforcement and counterterrorism, trade and investment, and energy.

We do this not just because it’s nice and we enjoy opportunities to come together – albeit virtually as we’re doing today, more often than not.  We do it because the bonds between our peoples help to advance key foreign policy objectives and our hopes for security and prosperity.  As citizens of a democracy, it’s up to us to improve our country for future generations.

The Greek diaspora and especially grassroots organizations like AHEPA help to put our democratic principles into practice, forming a vital bridge between the peoples of our two countries. You are one of the secret ingredients of our bilateral relationship, helping to advance our great work.

I’d like to share with you today some of the ways we’re celebrating Greece’s bicentennial and how we’re working with Greece to strengthen our ties through programs that supports Greek civil society, cultural, and educational institutions.

I also want to highlight how AHEPA puts our shared values into practice through its generous contributions and events like this, which help keep the historic ties between the United States and Greece alive and ensure that Greeks and Americans on both sides of the Atlantic can better support each other.

Greece’s 2021 bicentennial offers a special opportunity to celebrate our countries’ historic relationship and underscore America’s respect for the ancient Athenian ideals that inspired our founders and continue to inspire us today.

Last week, I announced the launch of the Embassy’s year-long campaign to commemorate the 200th anniversary of the Greek Revolution.

My announcement followed Ambassador Gianna Angelopoulous’s launch of Greece’s campaign to commemorate this symbolic anniversary with programs to celebrate Greece’s history, honor its people, and look forward to its bright future.

The Embassy’s campaign will support this effort through educational and cultural programs that highlight the role the American Philhellenes like Samuel Gridley Howe played in Greece’s war for independence, the strong people-to-people ties between the United States and Greece over the past 200 years, and our commitment to our present-day strategic partnership.

I’m delighted to share that The Hellenic Initiative, a Greek diaspora organization, has received one of our bicentennial grants.  In 2021, we will implement a Virtual Entrepreneurship Project with THI called “Connect the Dots,” through which successful Greek American business leaders will mentor young Greek entrepreneurs.

Bicentennial programs like “Connect the Dots” and our sponsorship of the Athens Science Festival seek to strengthen the entrepreneurial and scientific ties between our two countries.  They look towards Greece’s digital future, addressing Greek young people who have such strong ties to the United States.

Other bicentennial events include exhibitions at the Museum of Philhellenism and the American School of Classical Studies, as well as a special performance by the Greek National Opera.

We’ll also provide scholarship funding towards the establishment of a new American Studies Master’s Program, and we’re organizing an exhibit chronicling the history of the Consulate General in Thessaloniki.

I know that the Greek American diaspora and the Greek Orthodox Church, led by Archbishop Elpidophoros of America, will play a key role in 2021 celebrations in the United States.  It’s a wonderful opportunity to remind Americans what Greece and Athenian democracy stand for.

In addition to the bicentennial celebrations, I’m confident that 2021 will be the year that we defeat COVID-19, and we will do this through close transatlantic and U.S.-Greece cooperation.

Greece’s democratic institutions have met the challenges of the pandemic.  The global health crisis has strengthened and validated the partnership between our two countries, as evidenced by the many American companies that have stepped up to help the Greek government and private sector.

I’m very proud of U.S. companies like Pfizer, Abbott Corporation, and Johnson & Johnson for helping to strengthen our health care cooperation with Greece, just as technology companies like Microsoft, Cisco, and Google have generously stepped forward to offer remote work and learning solutions to Greek citizens during this extraordinary time.

In particular, Pfizer’s COVID-19 vaccine is a success story for transatlantic cooperation as well as a testament to the power of the Greek diaspora.  Pfizer CEO Albert Bourla, who led the production of this life-saving vaccine, has surely become one of the most famous members of the Greek diaspora anywhere, and I’m proud to count Albert as a friend and supporter of the Embassy’s work.

I particularly want to express my gratitude to AHEPA for its efforts to provide COVID-19 relief.  At the start of the pandemic last year, AHEPA’s Executive Director Basil Mossaidis was one of the first people who called to ask me what AHEPA could do to help here in Greece.

Moreover, the AHEPA University General Hospital in Thessaloniki, founded in 1947 with the support of AHEPA in the United States, has become a lifeline for the residents of Northern Greece as that region became ground zero for Greece’s pandemic.

When I visited the hospital to express my appreciation for the staff this summer, I was inspired to hear how scientists and doctors there worked through the Greek Easter holiday to ensure that the results of the Remdesivir clinical trials that they conducted were fed as quickly as possible into the Gilead databases for a possible therapy to treat COVID-19.

Throughout the pandemic, I’ve been impressed by the eagerness of Greek citizens to remain engaged with the Embassy.  Our educational programs, which range from English language training to science, technology, mathematics, and media literacy, and our cultural programs, such as a recent screening of the musical Hamilton, regularly attract hundreds of online participants.

The Embassy’s cultural programming plays an important role year in and year out, connecting our peoples and our countries, and highlighting our shared values and increasing mutual understanding.

We cooperate with our Greek partners on everything from cultural property preservation to capacity-building within the cultural sector, including our annual international museum conference, which celebrated its tenth anniversary this year in a virtual format.

We also support U.S. participation in Greek film festivals and bring U.S. filmmakers together with their Greek counterparts to deliver masterclasses and identify new opportunities for cooperation.

We facilitate the participation of Greek creative professionals, such as writers and animation specialists, in U.S.-funded exchange programs and workshops.

These are just a few examples of our ongoing cultural initiatives and their role in reinforcing the ties of mutual understanding between our countries.

AHEPA and the U.S. Embassy also have a history of working together to tell the story of the longstanding connections between the United States and Greece.

Most famously, under the leadership of my friend, mentor, and predecessor, Ambassador Nicholas Burns, AHEPA worked with the Embassy to commission the famous statue of George C. Marshall, which is located in our Embassy courtyard, to symbolize the United States’ support for the Greek state and people after WWII.

AHEPA raised the funds for this statue and also supported the development of a history exhibit, including historical photos and artifacts, telling the story of our relationship.

This exhibit is one of the highlights of our Embassy that we proudly share with visitors here.

More recently, AHEPA supported the restoration and cleaning of the Harry Truman statue here in Athens after it was vandalized during demonstrations.

AHEPA and other diaspora groups also played a significant role in the 2018 Thessaloniki International Fair, when the United States was honored country.  The extraordinary success of TIF has led to greater American investment throughout Greece, helping to support Greece’s return to economic growth after a ten-year crisis.

Your study abroad and summer excursion programs have also instilled a deep and abiding love for Greece in countless young Americans, planting the seeds for our countries’ common future, and helping to strengthen our bilateral relationship, which is by all accounts the strongest it has ever been in modern history.

Since we’re in this bicentennial year, I want to conclude by sharing with you the story of Dimitrios Ypsilantis, which highlights the deep bonds between the Greek and American people, rooted in our shared commitment to democracy and freedom.

During the American Revolution of 1776, Dimitrios Ypsilantis sailed from the shores of Greece to fight for American independence.  Half a century later, his descendants journeyed back to Greece with Philhellenes from our young nation to fight just as fiercely for Greek independence.

The city of Ypsilanti, Michigan, was named after Dimitrios and his descendants, and it was AHEPA that erected the statue there to honor Dimitrios’s faith in democracy and his willingness to defend our shared values with his life.

Dimitrios’s story reminds us of the principles that connect and empower our peoples.  And I want to thank all of you for your efforts over the years to support Greeks and the mission of the U.S. Embassy to strengthen those vital bonds and bring us closer together.

I’m delighted that AHEPA is planning to convene the 99th Annual AHEPA Family Supreme Convention here in Athens in July.  We look forward to welcoming you then and continuing our great work together, I hope very much in person!