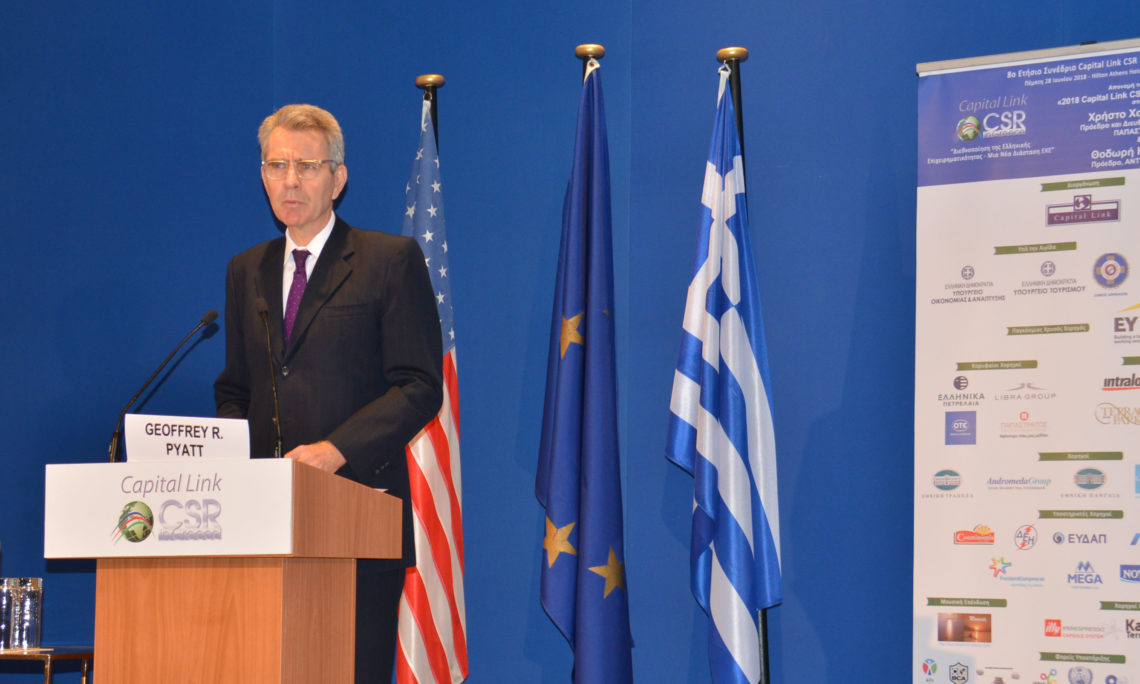 Thank you Nickolas, Olga, Minister Kountoura. It’s great for me to be speaking again in from of a Capital Link group. Let me start also by offering my warmest personal congratulations to my friend Theo Kyriakou and Christos Harpantidis for being recognized as this year’s recipients of Capital Link’s CSR Award.

I am especially pleased to be here speaking today after last week’s breakthrough agreement on debt relief between Greece and the Eurogroup and coming on the heels of what was a very successful visit to Washington, New York and Chicago by Minister Charitsis. While in Washington, I had the opportunity in Washington to review our bilateral relationship with senior Administration officials and our key Congressional interlocutors, and was greatly encouraged by the recognition of progress that we are making here, and by the resolve of all the key players in Washington to sustain momentum with Greece.
And so, the timing really couldn’t be better to talk about Greece’s future and the investment opportunities that exist here, and particularly in the energy sector, since attracting investment will be absolutely key to the next stage of Greek economic recovery.

Energy of course is one of the sectors I regularly highlight as among the most promising for increased U.S. investment, but it is also key to our wider security partnership, and Washington’s view of Greece as a pillar of regional stability.

A few weeks ago, I participated in a panel discussion on energy issues with several of my colleagues from other European countries. What struck me then was our shared perspective on key issues related to Greece and European energy security. We all recognized Greece’s critical role as a regional energy hub, and shared a common mission to enhance investment in this sector.

There was a broad consensus that supply diversification and the establishment of a steady, uninterruptible supply of energy to Europe and the wider region are the foundation for economic growth and a basic pre-requisite for political and economic stability.

At the Embassy, our team has focused on this sector because energy is one of the most promising areas for attracting new investment that Greece will need to sustain growth. Energy, and Greece’s role as a European energy hub, is therefore central to the U.S. strategy to build up Greece as a pillar of stability.
Our engagement on this issue reflects long-standing U.S. policy. As Assistant Secretary of State for European and Eurasian Affairs Wess Mitchell recently told the U.S. Congress, “The energy security of U.S. allies is a fundamental national interest. When allies’ access to reliable and diversified energy is secure, they are less susceptible to pressure from outside powers.”

Because we are committed to European energy security, we oppose the development of the Nordsteam II pipeline, which would only further concentrate Russian gas imports to the EU in a single route, increasing Europe’s susceptibility to a supply disruption. It would bypass Ukraine as a transit country and amplify the vulnerability of Poland and the Balkans.

Because almost every European energy diversification project runs through Greece, we have a compelling interest in energy infrastructure projects here. As a friend and ally, our objective is to ensure that no country from outside Europe’s Energy Union has the ability to manipulate its resources or leverage its position in the global energy market to extort other nations.
To counter these efforts and to advance our goals on regional stability, the United States, alongside our European partners, pursues a European energy strategy built on three planks, all of which are also good business decisions: diversification of fuel types, diversification of countries of origin, and diversification of delivery routes.

The energy mix in Greece, of course, already includes solar, wind, hydro, lignite, oil and natural gas. Greece is also developing its own upstream energy potential, with companies from around Europe and the United States beginning to explore opportunities here, including the Spanish company Repsol which has cooperated with Energean – a Greek company with major U.S. investment.

We agree that ensuring diversification in energy supply provides the surest path to this goal, and therefore we must all support the various energy infrastructure projects the Greek government has advocated, leading with the TAP pipeline.

And the support that Greece has shown for the Trans-Adriatic Pipeline, as well as the IGB Interconnector and the Alexandroupoli FSRU, further illustrates the country’s commitment to its own energy security, as well as that of Greece’s neighbors. And given this is the theme of this Forum, I’d also like to mention TAP’s work on Corporate Social Responsibility – or CSR.

The TAP team recently received an award from the Evros Chamber of Commerce for supporting the local economy and community, contributing to employment and other goals. Of the 3,500 plus people that have worked on the project to date 80 percent were recruited from local communities– as well as the procurement of goods and services from local businesses. Hotels, restaurants and catering companies, transportation services all played a role.

As a result of this collaboration, these local businesses were able to take advantage of the commercial opportunities that TAP’s huge investment has created. I love hearing these stories, as they show the positive impact that these projects can bring to local Greek communities.

U.S. investors are also looking at opportunities in energy privatization, including Hellenic Petroleum. ExxonMobil expressed an interest in partnership with Total and Hellenic to explore production prospects in Greek waters. Also, General Electric has expressed its confidence in the wind market, which it sees expanding not only in Greece, but throughout Europe.

Other energy projects also have the potential to bring in billions of dollars in foreign direct investment and create thousands of new jobs in Greece. Not to mention the benefit they would bring by advancing Greece’s position in the regional energy market.

There’s already good collaboration between the U.S. and Greece in the energy sector. For example, a Greek company TERNA has built wind farms in the U.S. while GE and Mytilineos have teamed up to build a major power plant in Libya. And we place great importance on Prime Minister Tsipras’ announcement last October that Greece will begin to import U.S. LNG.

While we are keen to see American LNG exporters succeed in finding new markets in Europe, the real winners will be consumers, as the European gas market sees the results of true competition. That’s one reason why the EU has welcomed additional LNG exports from the United States.

And I should note also that Greece’s actions are not isolated – the Baltic States and several Central European countries are developing their own regasification terminals and interconnections that are further transforming European energy markets. Indeed, Poland just announced a long term U.S. LNG supply contract, locking in its previous spot market purchases.

So in closing, I would like to stress that the United States will continue to prioritize energy issues in the U.S.-Greece relationship, and to partner with Greece to further develop European energy security, which benefits our shared security and prosperity. We are committed to the United States being a reliable LNG supplier. We are hopeful that Greece, as it continues to move forward with liberalization of its energy market, will see the U.S. as a major investment partner in energy, and I am confident that this sector will be a key driver of the country’s economy as Greece emerges from economic crisis and continues on the path to recovery.