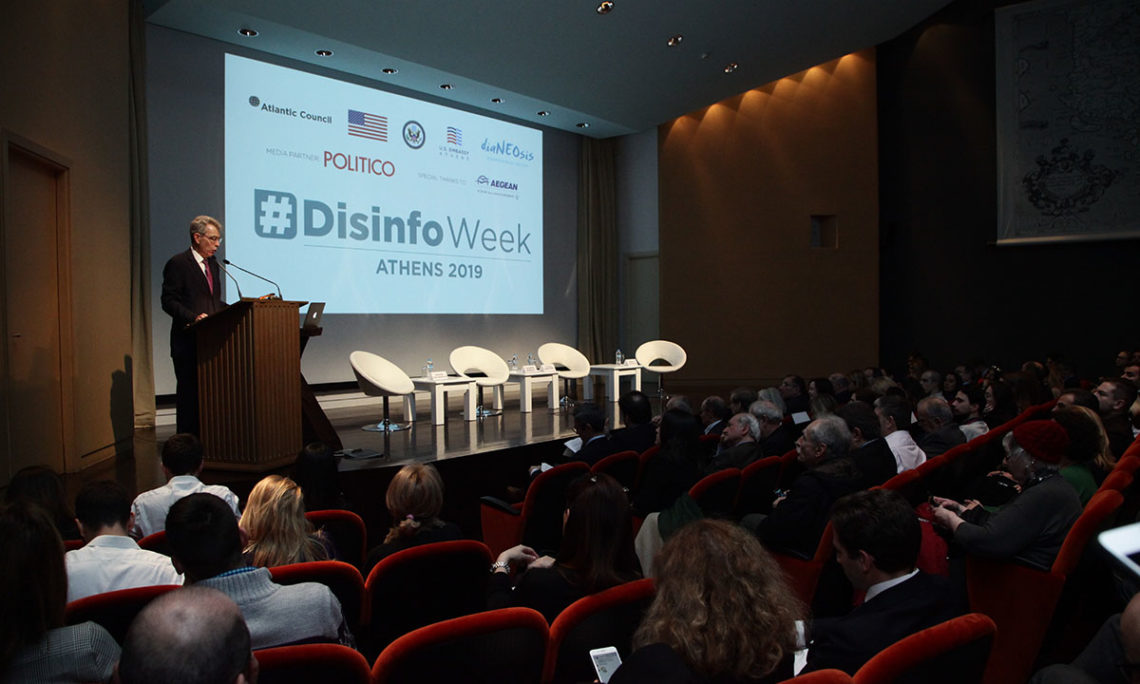 Thank you. Kalispera!  I am delighted to welcome you all here tonight as we kick off a series of #DisinfoWeek conferences that the Atlantic Council is organizing across Europe.

But before I get to my remarks, I want to in particular acknowledge the presence here this evening of the Atlantic Council’s Senior Fellow, Ambassador Dan Fried, who will speak later this evening.  As Ambassador and as Assistant Secretary of State, Dan has educated generations of diplomats – including me – regarding the importance of our transatlantic community, and the need to stand up strongly to defend the West.  I can think of no one in America better suited to speak on the challenge of disinformation as Europe heads into a year of elections, and I am delighted that he is with us here in Greece for a couple days. Thank you, Dan.

Many of you have heard me speak about the pivotal geography of Greece – a country that has been at the crossroads of great power competition for centuries.  So, it is only fitting that Greece is one of the hosts for a Europe-wide discussion on a topic that is dominating headlines and geopolitics around the world.

As Western democracies – both as governments and as citizens – we face an unprecedented attack of disinformation, accelerated by social media, that threatens to distort the open market of ideas by promoting lies and stoking hatred.  My own country has been and continues to be a prime target for disinformation, as illustrated by Russia’s manipulation of social media around the 2016 presidential elections.

Disinformation comes in many forms, but the most malicious is when disinformation is used as a tool of one state to destabilize another. I lived this firsthand during

2013 -16 when Russia weaponized information to complement its military and hybrid warfare strategies invading Crimea and attempting to dismember eastern Ukraine.  I regret that in responding to the crisis in Ukraine, we in the West were sometimes slow to recognize this hybrid warfare strategy for what it was. But today there is no excuse.

Almost everyone I talk to in Greece now understands the well-documented Russian malign influence operations in the 2016 United States presidential election.  Russian attempts to use propaganda in the United States are nothing new – they existed long before the Facebook or Twitter – but they are much more pernicious today because social media has a multiplier impact and can spread so fast in our open societies.

What we saw in the United States in 2016 is an interference model that should concern all western democracies.  In this model, the Russian state promotes fringe voices across the political spectrum from the far-left to the far-right, including groups who advocate violence or the overthrow of governments. Russia attempts to foment and fund controversial causes – and then foments and funds the causes opposed to those causes.

As my friend, colleague and recently departed Assistant Secretary of State Wess Mitchell phrased it, Russia tries to “systematically inflame the perceived fault-lines that exist within our society.”  It tries to use an essential feature of our democracies – our openness and the free flow of information – to destabilize us.

Recognizing these challenges, we need to work together to develop comprehensive strategies to identify and combat disinformation. That is why discussions like the one here tonight are so important.

The U.S. government is committed to fight malign influence and disinformation in our transatlantic community.  One of the best defenses against disinformation is a free and transparent news media.

In Europe, the United States is engaging with partners like the Atlantic Council and diaNEOsis to promote healthy and robust public debates based on facts, evidence, and reason. We believe a well-informed citizenry is key to the strength of our democratic institutions.

As most of you know, I am a fairly prolific user of social media to support my diplomatic work.  And while I believe that we can and shouldemploy technological tools to make our democracies work better and to communicate more broadly, we also have to grapple with managing the firehose of information that these tools can produce.

But despite these challenges, I am certain that freedom of expression and freedom of speech will remain a bedrock of our democratic societies — it is one of the values that binds us together — and that technology will serve, over the long term, to strengthen and deepen our democracies.

So tonight, here in the birthplace of democracy, I hope your discussion will generate concrete ideas for how to increase media literacy, promote professional journalism, and create even stronger networks of open dialogue, fact checking and resource sharing in the fight against misinformation.

Thank you all so much for joining us and I look forward to a productive and lively discussion.Ευχαριστώ πολύ.