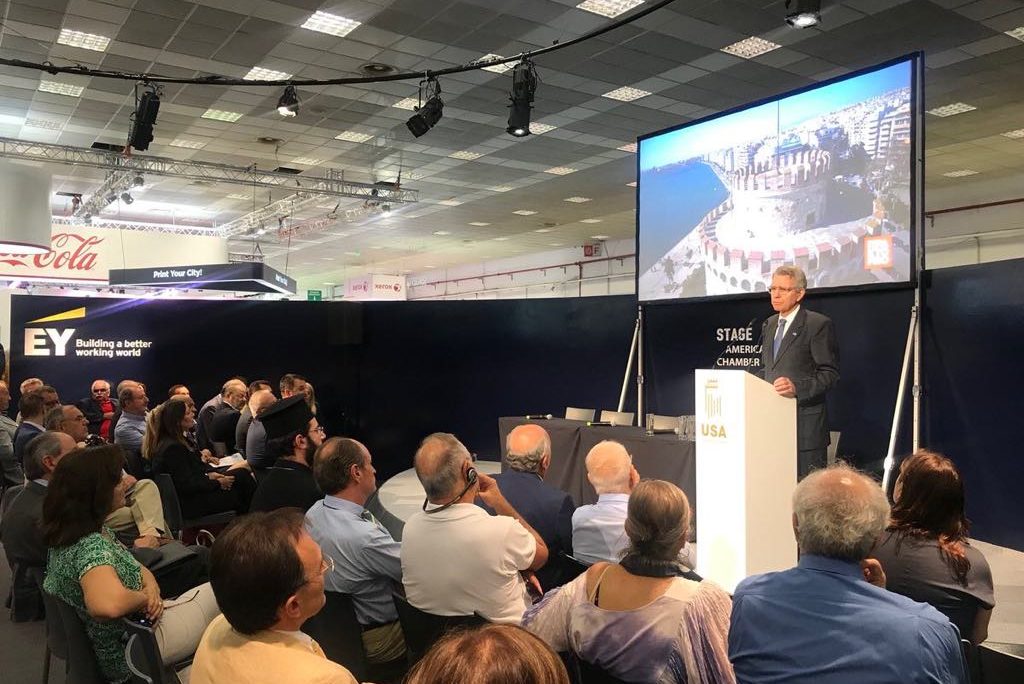 Ambassador Pyatt delivers remarks at the ANA conference at TIF2018

Ambassador Pyatt: I apologize for being a few minutes late. I was with Minister Pappas and Minister Kretsos. We were just going through the Startup Pavilion across the road from ours. It’s really fantastic.

First of all, let me say how proud I am of this pavilion, the U.S. presence at the Thessaloniki International Fair, but also how enthusiastic I am about the synergy that we are building between the American knowledge-based economy and the Greek startup sector. We’ve got some fantastic examples of this here.

This event is focused on the media, and I want to start by saying thank you to our partners from ANA. A couple of months ago I was with Minister Pappas and we signed a Memorandum of Understanding, cooperation between our two agencies. And this event today is an opportunity to talk about how journalism moves forward and about how it shapes perspectives on the U.S.-Greece bilateral relationship.

We are at a very special moment in our bilateral ties, and I think most of you have a pretty good sense of what we’re trying to do in our bilateral relationship. I talked a lot about it. I’ve made it a priority as American ambassador to be as transparent as possible in my work and to speak with a variety of media.

I think, on the whole, the Greek media has gotten it right in terms of telling the story about the U.S.-Greece relationship, but since we’ve got some journalists here, we have our partners from ANA, I just want to fan through very quickly some of the key elements of our policy approach.

First and foremost is our confidence in Greece as a pillar of stability in a volatile region. The stronger Greece is, the better a partner it is for the United States, and the more capable we are of together achieving our shared goals for security, prosperity in the region and beyond.

That’s why we have invested so much in this Thessaloniki International Fair because it is a vehicle to help ensure that 2018 really is the year when Greece leaves the economic crisis behind and we grow the opportunities for expanding our trade and investment relationship.

We also see Greece as a very important partner on energy issues. We talked about that a lot on Friday at our conference with the American Chamber of Commerce. You heard it also from our Secretary of Commerce. We are putting all of our weight behind projects like the floating regasification unit in Alexandroupolis, the TAP Pipeline, the Interconnector Pipeline between Greece and Bulgaria, all of which have the promise of turning Greece into a key European energy hub and advancing our shared goals for energy security and diversification.

And then finally on the economic side, we’ve talked a lot, and Secretary Ross talked about the U.S. commitment to stand by Greece through the economic crisis. We are going to continue to support Greece as the economy moves to a new phase. And this Thessaloniki International Fair is proof that American companies are willing to invest here, are willing to partner with Greek businesses and see a real opportunity here.

So we are absolutely confident of the course that we’re on. We’re also confident that one of the enduring pillars of our relationship will be our shared democratic values. A free press is a critical aspect of that. I don’t expect that all the things that the Greek media are going to write about the United States are favorable. They haven’t let me down yet.

But I think we’ve put a lot of energy, both in terms of making the embassy transparent, accessible, but also in terms of supporting Greek journalism with our exchange programs, with seminars, with opportunities to travel to the United States, to work with our Foreign Press Center, to meet counterparts from the United States. And I’m excited that through this event we’ve got some journalists from the United States and we’ve got some leading Greek journalists to talk about the future of a relationship that I see as critically important to the long-term stability and prosperity of Southeastern Europe, but also a very good bet for the United States as we think about how to advance our diplomatic and security and commercial economic interests in a complicated part of the world.

So thank you very much. I’m delighted to be here. I’m especially gratified that we have Minister Charitsis here. I’m sorry I missed his remarks. And I think we’re going to hear from Minister Kretsos now, speaking on behalf of Minister Pappas.