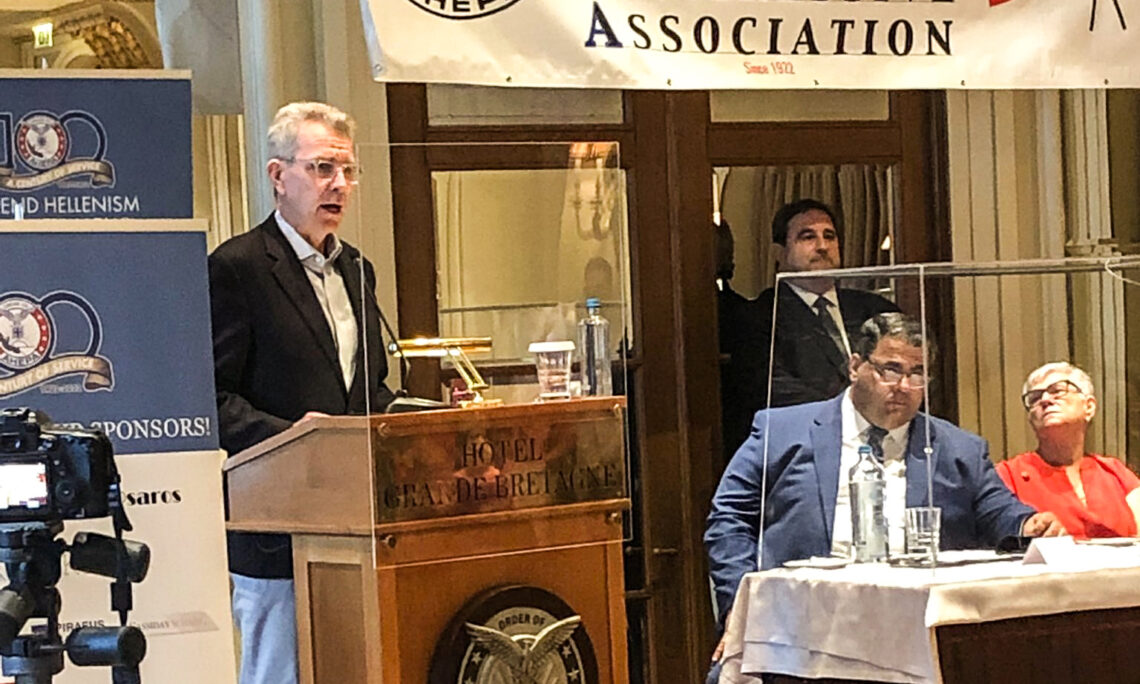 Kalispera, good afternoon everybody.  Thank you, George for that introduction.  And let me say what a real thrill it is for me to see so many of my fellow citizens here in the room this evening.

When George and Basil and I first started talking about this event to mark the Greek bicentennial and AHEPA’s 99th Annual International Convention, I don’t think any of us were sure that you’d be able to pull it off.  Since then, a lot has happened, including in particular dramatic progress in the deployment of vaccines in the United States, and of course the reopening of the Greek tourism season in particular to American citizens.

That achievement here in Greece says a lot about the government of Prime Minister Mitsotakis, about the work done by our friends Minister of Health Kikilias, Minister of Digital Policy Pierrakakis, who, in particular,​ has managed to really accomplish a revolution in the way the Greek state engages with citizens, and whose work with the Ministry of Health has been indispensable to the government’s rapid and successful vaccination campaign.  And then our friend, another AHEPA member, Minister of Tourism Harry Theoharis whose smart, safe, and deliberate approach to reopening the Greek tourism market has made this year truly the year of American tourism in Greece.

It is a tribute to Minister Theoharis’s work and Prime Minister Mitsotakis’s leadership that we have a record nine direct flights from the United States coming to Greece this summer.  And I know that Americans truly are flocking to this country for everything that the Greek summer has to offer.  My wife Mary had to rush back to California this weekend to deal with a medical situation at home.  And I was amazed when we were checking in out at the airport that her flight was offering 500-euro vouchers to defer to another date, reflecting the fact that the flight was overbooked and that the Greek summer is back for American tourists.

This is good news for the Greek economy but it’s also outstanding news for the people-to-people ties between our two countries.  And in this regard, I really want to salute AHEPA for the leading role that it plays in fostering this exchange between our two countries and the extraordinary people-to-people ties that are the foundation of our 200-year alliance and friendship with Greece.

You’ll be hearing a lot from me over the next couple of days at a number of different events, but I thought I would use this afternoon just to say a couple of words about the occasion that brings you all here to Athens, which is the Greek bicentennial.  This year has been an important reminder that the Greek and American revolutions were intimately linked, rooted in our countries’ deeply ingrained belief in equality, human liberty, and self-governance.

As the inheritors of Ancient Athenian principles, our founders in the United States felt it their duty to help Greece reclaim its birthright of democracy.  All across America, 200 years ago, citizens established philhellenic societies to provide humanitarian aid to the Greek people, and to lobby their elected officials to recognize Greek independence.

This extraordinary bond between our peoples continues now 200 years later.  The Greek American diaspora, and especially grassroots organizations like AHEPA, put our democratic principles into practice, advancing the U.S.-Greece relationship and playing a vital role in helping us to advance our shared goals.

From your study abroad and summer excursion programs to your recent support for the restoration and cleaning of the Harry Truman statue here in Athens, and the assistance that you provided to the Greek people during the COVID 19 pandemic, AHEPA has demonstrated time and again what a force multiplier you are for our bilateral relationship.

And I know that you all know very well that President Biden is a lifelong friend of Greece.  He cares deeply about the democratic values that were born here in this city.  The President is personally committed to taking the U.S.-Greece relationship to the highest level that it has ever achieved.

Today, as the United States joins Greeks around the world in celebrating the birth of the modern Greek state, we are extremely proud to recognize AHEPA’s contributions to our alliance.  Together, we will work to honor the unwavering friendship between America’s and Greece’s democracies, and we will work to charter an even more ambitious and bold agenda for a stronger and more prosperous shared future together.  Efcharisto poli.