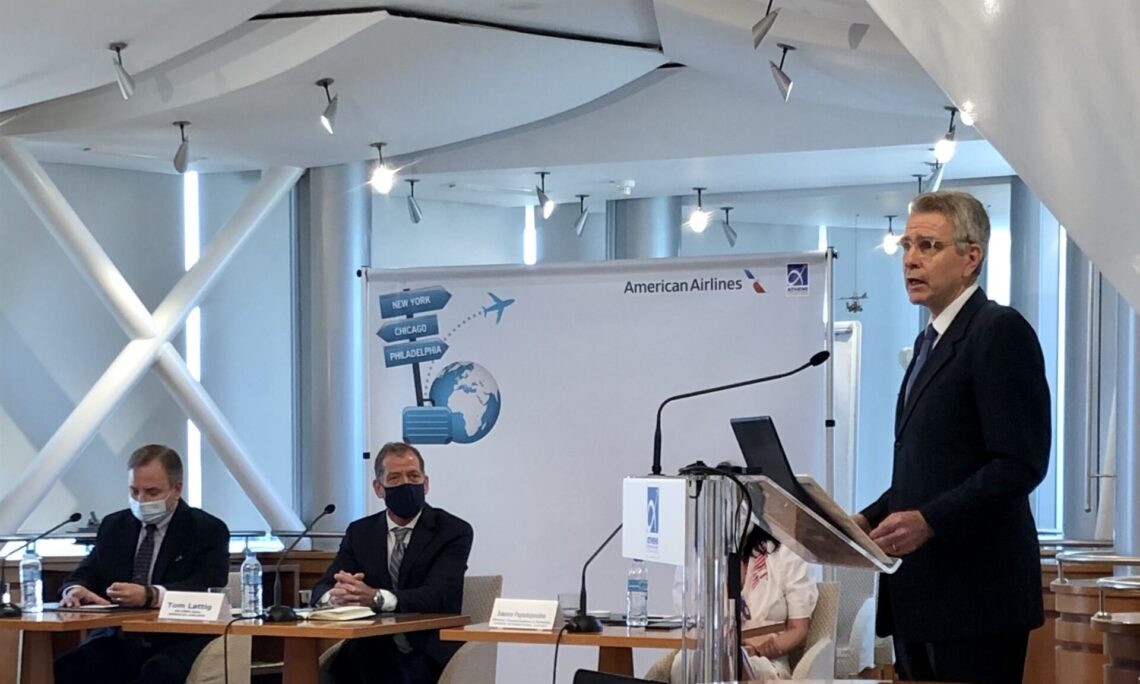 Kalimera sas.  Ioanna, Dr. Paraschis, colleagues and friends, it is a huge pleasure for me to join you here today, along with my countrymen from American Airlines, to celebrate the launch of American’s daily direct flights from New York, Chicago, and Philadelphia to Athens.

I remember giving remarks here at the airport exactly two years ago when American launched its first non-stop flights between Chicago and Athens, connecting Greece to one of the world’s largest Greek diaspora communities.  There was a tremendous feeling then of opening and opportunity.

Since then, we’ve all been through a lot.  And the airline and tourism industries have been hit particularly hard by the global pandemic.

But thanks in large part to American vaccines and transatlantic scientific collaboration, and concerted efforts by the airline industry to ensure safe travel through this period of great uncertainty, demand for international travel is once again on the rise.  We’re beginning to put the pandemic behind us and look ahead together.

So many of us have experienced hardships over the past year and a half: people have fallen ill, they’ve endured months of lockdown, or have been unable to visit loved ones.  And I know we’re all looking forward very much to the opportunity to begin traveling again.

The launch of a record nine daily direct flights by U.S. airline companies, including American Airlines, to Greece will help to make that aspiration a reality.

And it’s a tribute to Prime Minister Mitsotakis’s team that after strong advocacy from the Greek government, the European Union is moving forward with the EU Digital COVID Certificate, which will facilitate freedom of movement and economic recovery efforts.  This is yet another example of Greece setting a high standard for the European response to COVID 19.

I also want to congratulate my friend Minister Theoharis for his decision to visit the United States last month and to meet with executives at American Airlines, Delta, and United, which was another great indication of the Greek government’s focus on collaborating with the American private sector to drive economic recovery.

Greece is famous for its philoxenía, and that world-renown hospitality extends to Greece’s effective management of the pandemic.

The Greek government, for instance, has prioritized the vaccination of citizens on its islands and tourism workers and has instituted effective health protocols to make visiting Greece as safe as possible, knowing that peace of mind is an essential requirement for people to start traveling again.

As a result of these positive signals, American travel demand for Greece has skyrocketed.  Americans are eager to discover a secret that all of us living here know well: that this country’s crystal-clear waters and sparkling beaches, its winding mountain paths, its ancient monuments and museums, and its rare and brilliant light is something very special indeed.

Greece was recently cited for 545 Blue Flag beaches and has thousands of world-class historic and cultural destinations.

There’s seaside Thessaloniki, perfect for a city break and less than an hour from the gorgeous beaches of Halkidiki.  There’s beautiful Kastellorizo, Greece’s easternmost island, and the first Greek island to be fully vaccinated.

And there is that amazing, crystal-clear water of the Cycladic islands, and islands like Samos, Skiathos, and Kefalonia, which are much greener than the iconic Aegean islands that usually come to mind.  All offer unique opportunities for exploration, relaxation, and absorbing the unique culture of Greece.

On that note, I want to congratulate Fraport Greece on the official completion of its four-year program to renovate Greece’s 14 regional airports, offering greater safety and comfort, as well as new amenities and services, just in time for the 2021 tourism season.  In fact, I’m looking forward to seeing the flagship project in Thessaloniki when I travel there next week.

I want to applaud the efforts of U.S. airline operators like American Airlines to increase the daily direct flights between our countries, and I hope that at least some of these seasonal routes from New York, Chicago, Philadelphia, Atlanta and Dulles will soon grow into permanent, year-round flights.  That’s good for both of our economies and strengthens the people-to-people ties that are so important to this bilateral relationship.

As Greece celebrates its bicentennial and we jointly celebrate 200 years of friendship between our countries, Americans and Greeks will have the chance this year to enjoy more daily direct flights between our countries than ever before, further strengthening the enduring bonds between our peoples that both of our governments have pledged to support.