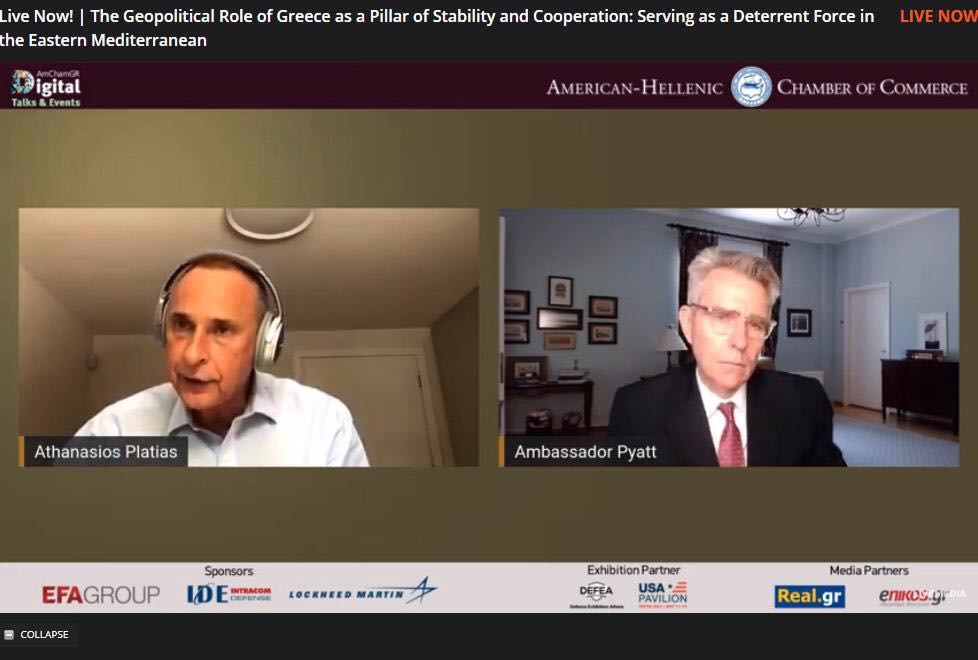 First of all, thank you very much to AmCham for having me.  It’s a tremendous honor to speak after two friends and collaborators, Minister Panagiotopoulos and Vice President Schinas.  And while I can’t count myself as part of the Thessaloniki contingent this afternoon, I would certainly subscribe to the sentiments therein.  And also I look forward very much to hearing what Admiral Diakopoulos has to say.

I’m going to be very brief because I think the presentations we’ve heard gave an outstanding orientation.  I would just highlight a couple of points.

First is just to underline the significance of the particular historical moment that we have arrived at.  We are truly at a high point in terms of the U.S.-Greece relationship.  You heard that from the Minister.  That was made very clear when Prime Minister Mitsotakis was in Washington in January. And in an election year, importantly, that is a sentiment which is shared equally by Republicans and Democrats in the United States.

I would also emphasize the degree to which the effort that we are putting into this strategic relationship is founded on a considered strategy. A strategy which recognizes the challenges that we confront today in Southeastern Europe, the return of great power competition in the Eastern Mediterranean, the importance of seeing that all of the countries of the Western Balkans continue their progress towards EuroAtlantic and European institutions and values.  We haven’t talked a lot about that today, but that’s an important part of what we’re trying to accomplish as well.

So our engagement with Greece is founded on the principle that Greece is indeed a pillar of stability, a reliable NATO ally that shares our values, with deep ties to the United States.  Also a strategy which believes that a stronger and more secure Greece actually serves America’s interests, which is what has informed much of the investment that we have made in our defense and security ties, which as Minister Panagiotopoulos described, have expanded considerably over the past 12 months especially.

I would also emphasize, since we’re speaking to an AmCham forum today, the importance of the partnership with American industry.  We are fortunate today that we have engaged with Greece and with the Hellenic military a who’s who of the U.S. defense and technology sector.  These are all companies that come to Greece as partners, whether it’s Lockheed Martin working on the F-16 upgrade program or the Sea Hawks or the P-3 upgrades. Honeywell’s engine upgrades for the Army’s Chinook helicopters.  The new program that we’re supporting for General Atomics to help Greece acquire a UAV MQ-9 capacity.  Erickson’s firefighting helicopters.  Raytheon’s avionics.  Pratt & Whitney’s engines.  I could go on and on.  And it reflects the commitment that American industry has shown to their partnership with Greece, even through the difficult years of the economic crisis.

And as I said, it is rooted in the judgment of the United States that we have in Greece an ally that has a powerful convergence of interests with the United States.  Whether that’s on developing energy in the Eastern Mediterranean as a driver of stability and cooperation and not conflict; or in working with countries like North Macedonia to move forward as a successful NATO member and hopefully in the future a member of the European Union.  I think it was a great source of pride to all of us to see the U.S. Air Force and the Hellenic Air Force flying together as part of the NATO Air Policing Mission over North Macedonia not so long ago.

Finally, I would heartily endorse everything that Vice President Schinas said about the transatlantic relationship and the critical importance of that.

And the other point I would emphasize, which I’m especially sensitive to because of my career trajectory in recent years: we cannot allow ourselves to forget, not only do we have a relationship in the transatlantic sphere which is incredibly large and incredibly important in terms of trade and investment.  Our community of values. The values of democracy and rule of law and freedom of speech which are so deeply interwoven into our societies and our institutions.  But we cannot forget the attractiveness of that model.

We are clearly now entering an era of renewed great power competition.  There are adversaries like China, like Russia, which would pretend to suggest that their society, that their economy represents an alternative model, but the one thing that I’ve seen over and over through my career is that our model, the EuroAtlantic model, remains both the most attractive one, but much more importantly, the surest route to peace and prosperity for our societies which has produced, as Vice President Schinas emphasized, a period of unprecedented peace and prosperity here in Europe over the past 70 years.

So I look forward very much to the conversation and again, I want to in particular compliment Minister Panagiotopoulos on a really superb overview of everything that we’re trying to do together as allies and friends.

Thank you, Professor.  Let me first share Vice President Schinas’ advice that Turkey is not a question that lends itself to easy or simple answers.

I think what I would emphasize on top of what we just heard is the American hope that we can see over time the Eastern Mediterranean evolve towards a region of peaceful cooperation including critically on the energy issues.  That’s why the United States has invested so much in our triangular relationship with two EU member states — Greece and Cyprus — along with Israel in the 3+1 dialogue, which is very much a manifestation of Washington’s effort and our Embassy’s effort to take a more systematic look at the Eastern Mediterranean as a unified strategic space.

This is a region which abuts on three different continents — Africa, Eurasia, and the Middle East.  We are trying to build a policy framework which engages with all of these fellow democracies to identify opportunities for common prosperity.

From an American standpoint, and I hear the same from Minister Hatzidakis on the Greek side: nobody is excluding Turkey from this vision.  And just as 70 years ago, it was hard to imagine what the EU eventually has become, I think we’re going to continue to lean into this challenge.

I would also note, and I don’t need to speak to the hard power aspects of American presence in the Eastern Mediterranean because it’s obvious every day including through the critically important platform which we enjoy at Souda Bay, which is really the flagship of U.S.-Greece defense cooperation, and we are profoundly grateful for that.  I was actually on the telephone yesterday with Admiral Foggo, the commander of American Naval Forces in Europe and Africa, who is about to relinquish command there.  He was reiterating to me again just how much value he and the U.S. Navy place on the partnership that we enjoy with our counterparts at NSA Souda Bay.

But I would also emphasize that we continue to employ, as does the European Union, our diplomatic tools.  We have spoken very clearly, both publicly and in private, about the destabilizing nature of some of the actions that Turkey has been engaged in.  In particular, the provocative nature of the MOU signed with Libya and our desire that all parties will focus on dialogue, will take advantage of opportunities, as Admiral Diakopoulos described, to set a positive tone and to recognize that there are certain principles of international law including those related to the continental shelf and the EEZ of islands on which Greece’s view is the same as the United States’ view, which is the same as Europe’s view, and will importantly influence how we continue to approach these issues.