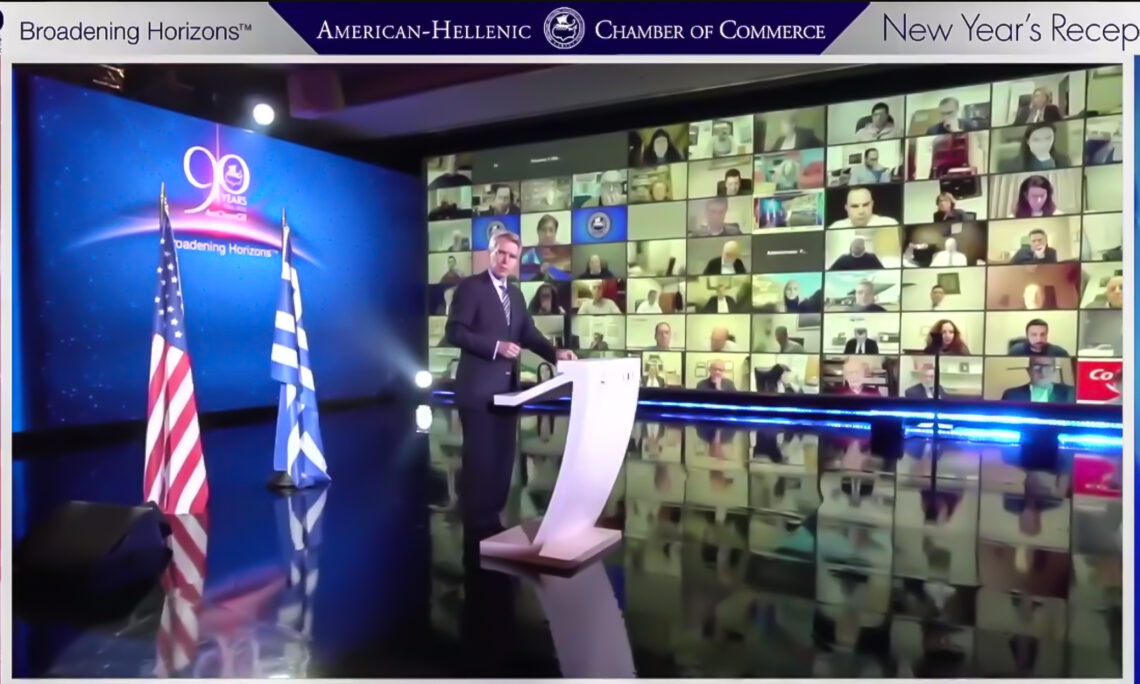 Thank you very much, Niko, for the warm welcome.  Xronia Polla to AmCham Greece.  And thank you, to you Niko, and to Elias, for the true friendship and the outstanding leadership as, together, we’ve worked to take the U.S.-Greece trade and investment relationship to the greatest heights its ever seen.

Every year, I look forward to the American-Hellenic Chamber of Commerce’s New Year’s reception.  It’s a great opportunity to see friends, to reflect on our achievements, and to look ahead to what the future may hold for us.

I want to congratulate AmCham on its 90th anniversary.  AmCham Greece is one of the most dynamic and engaging Chambers of Commerce in Europe, and I’m confident that your tireless efforts will continue to strengthen the relationship between our two countries.

It’s hard to believe this is my sixth AmCham Pita cutting.  Looking back over the years, I’m incredibly proud of what we’ve accomplished together.  From President Obama’s visit in 2016, to the unforgettable Thessaloniki Fair in 2018, and now two and a half years of fantastically productive collaboration with Prime Minister Mitsotakis’s government.  It’s really amazing to see how far we’ve come.

And despite the challenges of the pandemic, I’m inspired by the continuing positive trajectory of U.S.-Greece relations, thanks in no small part to our partnership with AmCham.

To Nikos, Elias, and all of our partners here tonight, I want to say thank you, and to let you know that your efforts have helped immensely to advance the U.S.-Greece relationship.  To reach this historic high point, you have taken the seeds that we planted at the 2018 Thessaloniki International Fair and, jointly, achieved successes that very few ever imagined.

The U.S.-Greece trade and investment relationship is a centerpiece of the bilateral alliance between our countries, and is included as a key pillar of the Strategic Dialogue process.  When Secretary Blinken, Foreign Minister Dendias, and other members from both of our teams were together in Washington, D.C., at the Strategic Dialogue in October, I was struck at how broad and deep our engagement has become.

Of course, we remain committed to the traditional sectors of U.S.-Greece economic cooperation like shipping and tourism.  Those have been a mainstay of our relationship for many decades.  But now we now see much more interest and action in areas like renewable energy and high-tech industries.  And AmCham has played a cenral role in this expansion of our cooperation.

Over the past year, we’ve seen major new investments in Greece from major U.S. companies.  Projects like Microsoft’s cloud computing center.  The announcement of JPMorgan’s acquisition of Viva Wallet is a huge vote of confidence in the Greek economy.

Pfizer inaugurated its Global Centers for Digital Innovation and Business Operations and Services.  Deloitte continued to expend its major footprint in Thessaloniki.  And Digital Realty acquired Lamda Hellix.  To name just a few.

And if you believe the press, Facebook is next in line to make a major new announcement about Greece.

I’m also very proud of the progress that we have made promoting stronger economic cooperation in the wider neighborhood, as Athens assumes a growing regional role.

The United States, let me be clear, views Greece as a driver of stability in the region and we greatly value the Greek government’s leadership on energy diversification, the environment, and digital transformation.

Despite the challenges of the pandemic, Greece also enjoyed a very successful year in tourism, fueled in no small part by a record nine direct flights from the United States to Athens, led by American, Delta, and United airlines.  This boost has helped our economies recover while bolstering the people-to-people ties that are the bedrock of our relationship.

In the year ahead, we’re going to continue to support Greece’s efforts to strengthen cooperation with its regional neighbors.  And I’m proud to note that AmCham has enthusiastically embraced this vision, helping to realize the great potential of Greece as a gateway to the Western Balkans and the Eastern Mediterranean, in particular through partnership with the Chambers of Commerce in North Macedonia and, as we just heard, Serbia.

I was honored to join AmCham in 2020 for the signing of its MOU with the American Chambers of Commerce in Egypt and Cyprus.  And I commend Niko, Elias, and the Board for exploring similar cooperation.  We see the Eastern Mediterranean region as a strategically vital crossroads where Greek and American interests converge.

Building a true regional market in Southeast Europe will draw further interest from American industry, and with it new investment opportunities.  I applaud AmCham for leading the way in this regard.

Our work together has also advanced other critical U.S. policy goals.  At the Southeast Europe Energy Forum in Thessaloniki last fall, I was very proud to participate with my fellow ambassadors from the region to witness the signing of the agreement for the Greece-North Macedonia Gas Interconnector.

Our discussions at that same event, contributed to the Alexandroupoli floating regasification plant reaching its final investment decision last week, another milestone in our shared agenda for regional security and climate transition.

Looking forward to the year ahead, I’d like to share a couple of thoughts about areas where I believe AmCham can have a major impact.

Those of you who have heard me speak before know how much I value our strong people-to-people ties, and the vital role that the Greek-American diaspora plays in achieving our shared goals.  Diaspora groups are fantastic force multipliers for the U.S.-Greece relationship, and successful Greek-Americans are the drivers behind some of our most high profile investments, like Pfizer in Thessaloniki and Advent Technologies in Patras.

I hope AmCham will continue to leverage these relationships to take advantage of the expertise and goodwill found in the Greek-American diaspora.

And we all need to keep working to get the word out about how Greece has changed, leveraging the halo effect from big new investments by leading American companies.

By doing so, you are shining a spotlight for American businesspeople on the incredible value proposition and potential that Greece offers.

There are a few specific sectors of the economy with strong growth potential in which our Embassy team looks forward to working with AmCham, especially energy, high technology, and healthcare.

The energy transition, which supports our countries’ shared climate goals, is only going to accelerate.  And renewables, smart technologies, and e-mobility are all sectors where American solutions can really stand out.

And I am confident that these partnerships can play a decisive role over the next decade as Greece continues its transition to cleaner energy, working closely with American industry and leveraging the new capital that will come to Greece under the European Recovery Fund.

The pandemic has hit Greece hard, just like the United States, but the Greek government’s smart, science-based approach has positioned it to emerge quickly from the pandemic shock.  And, of course, Mitsotakis’s team has used the challenge of the pandemic to supercharge its ambitious agenda for digital transformation, something that the United States heartily supports.

This is another area where U.S. companies can also play an important role, building on the successes of global players like Microsoft, Cisco, AWS and Google.  And as the Greek government continues to reform the healthcare sector, there will be opportunities for more investments like Pfizer’s cutting-edge digital solutions and clinical trials.

I’m very confident that further opportunities will open because Prime Minister Mitsotakis is targetting a significant portion of Greece’s 32 billion euros in EU recovery funds towards investments in areas like digitalization, the green agenda, health sector, all of which is in sync with the priorities of President Biden, Vice President Harris, and my government.

Last year, we celebrated the Greek bicentennial and commemorated the 200-year bond between our two nations.  I want to thank you all for your tireless efforts to foster the ties between our countries, always charting a path forward for us to advance our shared goals for stability and prosperity.  As I’ve said so many times, I am convinced that we’ve reached a peak but we are not yet at the summit, and there is much more we can do together.

And so, this evening I would like to offer a toast to Nikos, the AmCham board, and to all the member companies, for the great cooperation all these years that has enabled us to overcome daunting challenges and achieve so many milestones.

Like all of us, I hope that 2022 will be the year we finally leave the pandemic behind and are able to realize even greater possibilities, and are able to strengthen the ties between our two great democracies even more.

And while I certainly can’t promise to be here for a 7th AmCham Pita Cutting next year, I can guarantee that Mary and I will be coming back.  So save us a seat on the ferry!

Καλή Χρονιά! Thank you so much for the friendship and partnership over these years.