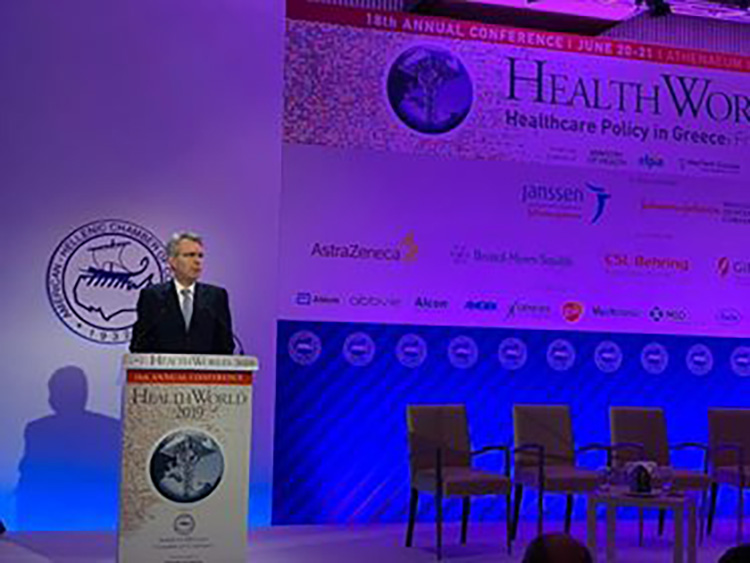 Thank you, Simos. Καλημέρα σας.  Mr. Minister, I’m very excited to be back at this year’s HealthWorld Conference, especially after a very successful visit to the United States last week with Simos, Nikos, Ellis, and all of our partners at AmCham for the SelectUSA conference and the Greek Investment Roadshow in Washington and New York.

I want to start by thanking the AmCham team for organizing this conference, and for everything they’ve done, over the last year especially, to strengthen trade and investment ties between the United States and Greece.

And I specifically want to recognize the members of AmCham’s Pharmaceutical and Medical Devices Committees for their tireless efforts in developing an enlarging health world over the past 18 years.  Due to your close collaboration with the senior executives from all of the AmCham member companies, HealthWorld now transcends corporate rivalries to be a model of effective industry sector advocacy.

I also want to thank, profusely, all of the companies that participated in making our Pavilion at the Thessaloniki International Fair such a grand-slam success last year: Pfizer as a Strategic Sponsor, Procter and Gamble as a Silver Sponsor, and Advent, Johnson and Johnson, Medtronic, Merck, and Lilly as Pavilion Exhibitors.

The record-breaking turnout at the Thessaloniki International Fair demonstrated the United States’ commitment to this relationship and set the ball rolling in a number of sectors, including health science, technology, and innovation, initiating conversations and partnerships between Greek and American companies that continue to bear fruit.

Following America’s participation as honored country at the Thessaloniki International Fair, the inaugural U.S.-Greece Strategic Dialogue, last December, set the agenda for our bilateral relationship in 2019, focusing on six key areas to deepen our cooperation including, importantly, Trade and Investment.  In my visit last week to Washington, I found that the stock of the U.S.-Greece relationship is at an all-time high and I look forward to registering more success stories at this year’s Thessaloniki International Fair and the second installment of our Strategic Dialogue, later in 2019.

With our partners at AmCham, we are committed to boosting trade and spotlighting the many investment opportunities we see here in Greece.  That’s why I was so glad to be joined last week by 28 delegates from 15 Greek companies at the SelectUSA Investment Summit in Washington, helping Greek businesses expand their operations in the U.S. market.

Greece sent its biggest delegation to SelectUSA this year—one of the largest relative to any country’s size—which included the Greek health companies Frezyderm and Rodi Pharmaceuticals.

This year, also for the first time, four Greek startups participated in SelectUSA, including one startup that our Embassy had earlier sent to South by Southwest, the iconic technology, innovation, and entrepreneurship festival in Austin, Texas.

Following SelectUSA, I joined AmCham and the Athens Stock Exchange for a roadshow of Greek companies in New York.  ATHEX and its listed companies presented a compelling story about the changing business climate in Greece following Greece’s exit from the bailouts.

These back-to-back events demonstrate the breadth of opportunities for expanding U.S.-Greek trade and investment ties.  There is a lot of headwind.

We always will welcome Greek health sector companies that want to expand internationally through investments in the U.S. and through collaboration with American companies and researchers.

The pharmaceutical industry contributes 3.4 – 4% to Greece’s Gross Domestic Product, and with its firm ties to multinational companies, the sector is well positioned to further expand and attract investment if the government provides the right signals.

The United States strongly supports Greek efforts to establish the conditions for more foreign investment and greater competitiveness, and this is where U.S. government strategy aligns with the topic of this year’s conference: From Noise to Signal.

Policies that promote research and innovation in Greece will directly improve the health sector.  These include policies to strengthen Greece’s intellectual property system, rewarding innovation through patent and data protection.  A science-based regulatory system like that in the U.S. is also crucial if Greece hopes to compete in knowledge-based and creative industries.

In this regard, I commend both the medical device industry and the pharmaceutical industry for investing heavily in research and development, since this keeps the industry competitive and enables Greece to deliver the most advanced, affordable healthcare to its citizens.

And after visiting companies like Advent at the Patras Science Park, I know how much Greek companies in this field have to offer.

Access to innovation, the application of digital technology to modern health care systems, and the use of artificial intelligence and big data to find innovative, personalized healing solutions are all topics I expect to be discussed in depth over the next two days.

Furthermore, clinical trials in Greece represent one of the most productive potential investments.  Not only do they generate significant capital inflow resulting in GDP growth, but they also increase the skills and employment of professionals and will help to reverse Greece’s problem of brain drain.

The pharmaceutical industry remains a pillar for investment in Greece through expenditure on research and development for new therapies.  As of 2017, a total of 2,265 clinical trials brought up to 80 million euros in foreign investment to Greece.  American pharmaceutical companies have told me that the potential market could be much larger if the government took steps to improve the underlying business environment.

And U.S. healthcare companies are eager to engage.  American companies are globally regarded for their innovations and their high-tech products.

The Pharmaceutical Research and Manufacturers Association, or PhRMA, notes that U.S. firms conduct over half of the world’s research and development in pharmaceuticals and hold the intellectual property rights on most new medicines.

Another Greek strength in the health sector is your compassionate and highly educated workforce.  University graduates hold over 70% of the jobs in this industry, compared to 22% in the economy overall.

This spring, I had the honor of presenting the Prix Galien “Preeminent Greek Leader” award to Pfizer CEO Albert Bourla, who helped spearhead the strong Pfizer presence at TIF and embodies the cooperation I’ve tried to encourage between the U.S. and Greece in this sector.

Albert has the human touch that so many of you in this room share.  He introduced the “Patient First” approach for Pfizer globally, and Pfizer of course stood by Greece during the difficult years of the economic crisis by donating one million euros in medicine to partially cover the unmet pharmaceutical needs of uninsured patients.

American success in the pharma industry has been aided by minimal market barriers and one of the most supportive domestic environments for the development and commercialization of pharmaceuticals.  U.S. companies seek the same here in Greece.

And while the U.S. government is eager to see American companies succeed, ultimately it’s up to Greece to make the reforms needed to attract and retain investments.  This is an important challenge, but one that I fully believe can be met.

I know that issues such as public procurement transparency, clawbacks and rebates, and pharmaceutical budget reductions weigh heavily on the industry and I’ve been discussing many of these topics with many of you now for three years.

With regard to these issues, I want to stress the importance of maintaining open lines of communication between industry and government to ensure that key stakeholders in the health sector remain engaged in finding solutions to common problems.

The best way to achieve positive results is to work together in a collaborative and competitive environment that ensures fairness and transparency.  Meanwhile, the U.S. Embassy will continue to focus on growing our trade and investment relationship with Greece.

I am more optimistic today about this agenda than at any time in my three-year tenure. I wish you continued success in improving healthcare for Greece’s economy and for the Greek people.  Ευχαριστώ πολύ.