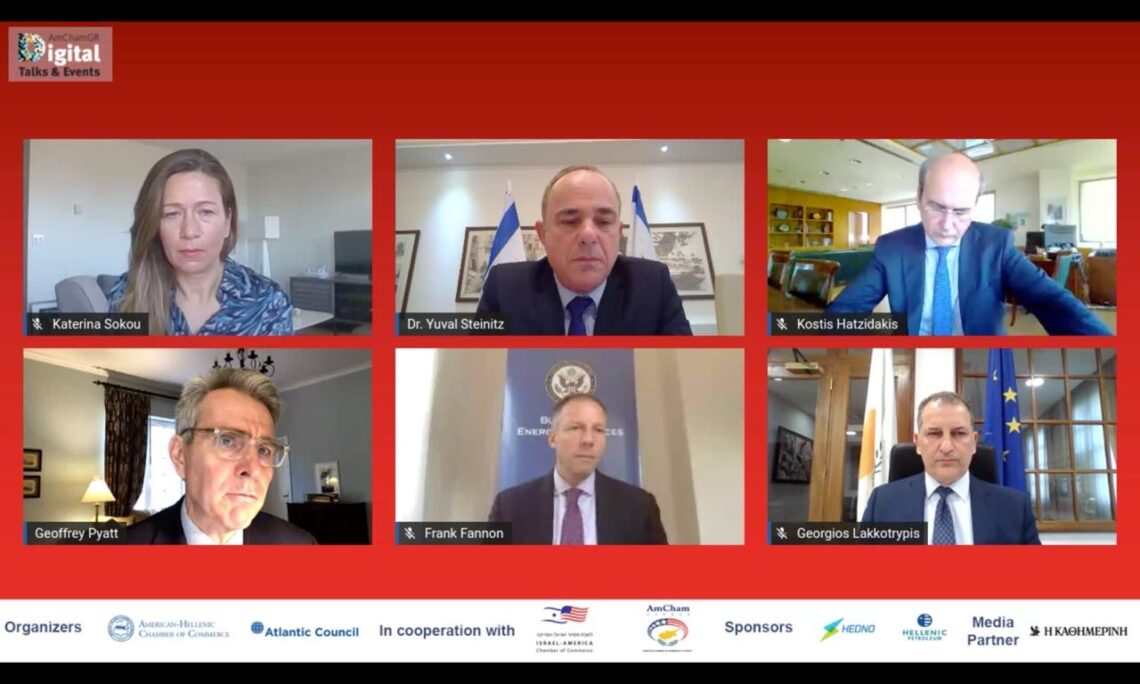 Thanks Katerina. Well, let me start first of all by congratulating both the Atlantic Council and AmCham for this event, and in the same way as Ben said, the Atlantic Council has made a big bet on Greece, the United States has made a big bet on the 3+1 framework as a means to build stability and prosperity in a strategically dynamic region. We can see the challenge of great power rivalry returning to the region, even during this Coronavirus period.

I would just say a couple of quick points. Minister Hatzidakis spoke well to the benefits to Greece from this trilateral cooperation. For the United States, first of all, I should highlight that energy has been one of the real bright spots of our bilateral relationship for a few years now. We see Greece emerging as a major source of energy security across southeastern Europe with a whole variety of projects from the expanded Revithoussa terminal to the TAP pipeline to the IGB pipeline now moving ahead to the Floating Regassification Unit in Alexandroupoli.

So our work together with Greece, Israel, and Cyprus brings together three democracies, three countries that enjoy a strong, dynamic relationship with the United States for us to work together on. That was Secretary Pompeo’s message when he went to Jerusalem last spring to launch the 3+1 process with all three leaders.

But it’s not a coincidence, I think, that the first area to really deliver value in terms of that cooperation is energy. I’m sure Assistant Secretary Fannon will have more to say about this. It’s great to see the three ministers and, of course, we had Frank in Athens in August for the first subgroup of the 3+1, which was our energy ministerial hosted by Minister Hatzidakis. We were very excited to do that. That was really one of the first foreign policy initiatives of the new government when it was elected in July. And I think it reflects how all of us are committed to continuing to work on these issues.

I would just say, to finish up, as we look to the future, we are going to continue to invest in this 3+1 relationship. Frank will speak to what we’re going to do on energy, but we see a lot of other areas where we can cooperate, including all of the work that’s going to have to be done both to deal with the consequences of the COVID-19 pandemic, and also to help stimulate growth across this wider region. And as you know, one of the bright spots for U.S.-Greece cooperation amid the difficulty of the pandemic has been what’s been happening on technology and technology investment, where there’s been some big investments by American giants like Applied Materials and Microsoft, even during the pandemic.

So we see technology cooperation as a natural area of synergy between the three governments and the United States. But we will also continue to work on the big strategic issues, including questions like how we stabilize the situation in the North Africa region, and how we work together to continue to advance our shared interest in European energy security. So we’ve got a lot to do, and I’m grateful for the effort that AmCham and the Atlantic Council are making to help inform those policy decisions.

Just to make a quick point before we close. First of all, endorsing completely Minister Hatzidakis’ strong statement on the status of U.S.-Greece relations. But I would also emphasize how important it is that the whole of the U.S. government is now looking at the Eastern Mediterranean systematically and through the lens of this 3+1 construct. Frank in our ENR bureau has been a big part of this, but it’s really a whole-of-government effort, and I should also single out the leadership of Senator Menendez and Senator Rubio in pushing ahead the East Med Act, which writes the administration’s policy into Congressional law. So I think we have built a new construct here, and I think it’s terrific that AmCham and Atlantic Council are helping to reinforce that. So thank you.