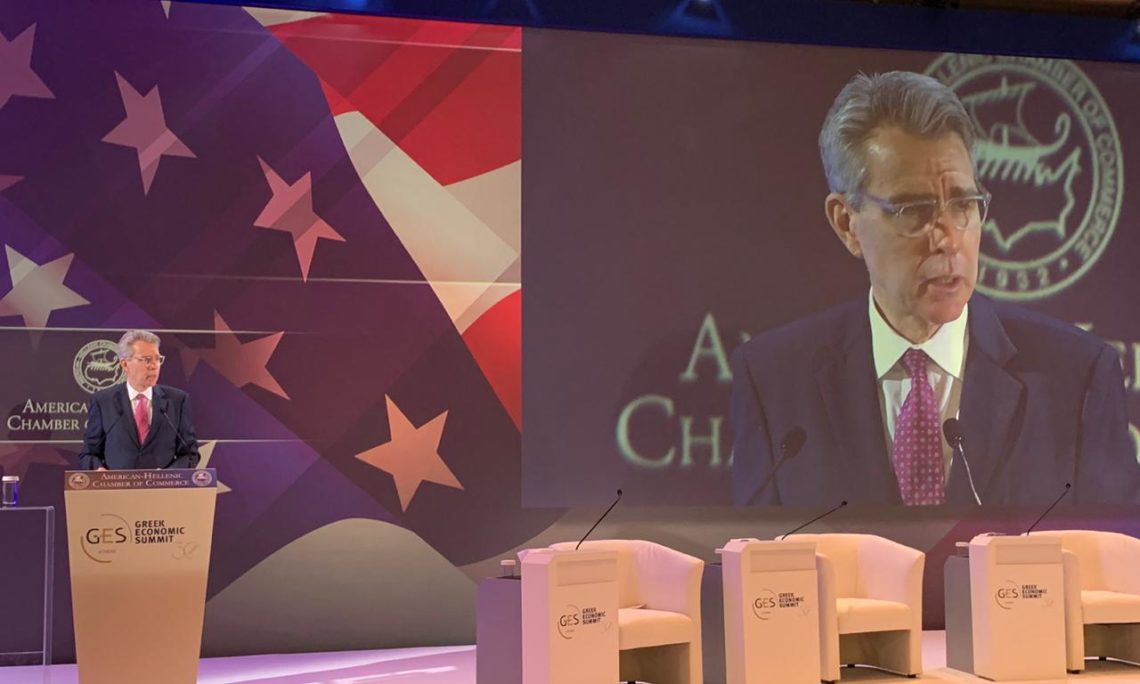 Καλημέρα σας.  Minister Staikouras, Niko, Theodore, thank you for inviting me to speak today.  It’s great to be back at the Greek Economic Summit.

This is my fourth time on this stage, and it’s breathtaking when I stop to reflect on how far the U.S.-Greece trade and investment relationship has come since I first spoke to this conference in 2016.

With a concerted effort by the United States, we have raised the bar for U.S. Greece relations, and with great sacrifice by the people of Greece, the process of reform and economic recovery is now well underway.  The outcome is good for both of our countries. Greece is back.

Both the AmCham and the Hellenic Federation of Enterprises have had a strong hand in these successes, so I want to thank both of your teams for helping us to move the U.S.-Greece relationship forward at a record pace.  And I particularly want to applaud Niko, Elias, and the rest of the team for the commitment to sustain AmCham’s momentum.

Last month, I was able to attend the highly successful Delphi-Kathimerini conference in Washington, D.C., with Minister Georgiadis and many other members of the Greek economic team.  That conference, along with Secretary Pompeo’s visit to Greece in October and the second U.S.-Greece Strategic Dialogue, demonstrated the historic strengthening of the U.S.-Greece relationship and the sense of momentum that we are seeing under PM Mitsotakis’ leadership.

A wide cross section of the U.S. government is engaged on this vital relationship, and we have a clearly identified a strategic interest in working to strengthen Greece’s economy, so as to ensure security, stability, and prosperity in the wider Eastern Mediterranean region.

During the Delphi-Kathimerini conference, Secretary of Commerce Wilbur Ross, a long-time friend and champion of Greece, who led the American delegation to the 2018 Thessaloniki International Fair and returned in Athens in September to discuss investment opportunities with Prime Minister Mitsotakis, observed that “Greece has emerged like a phoenix from the depths of the financial crisis.”

Secretary Ross credited Prime Minister Mitsotakis’s pro-business policies for the surging market confidence in Greece.  Greece, remarkably, now borrows at a cheaper rate than the United States; its sovereign debt trades at a lower yield than Italy’s, and Greece’s growth rate is among the fastest in Europe.  At Delphi DC Secretary Ross expressed the U.S. government’s belief that if Greece continues its policies on deregulation, privatization, reducing licensing requirements, lowering taxes, and implementing pensions reforms, the recently upgraded S+P rating can become investment grade within the next 24 months.

In this regard, I want to congratulate Minister Georgiadis for the Development Bill passed last month by Parliament, and Minister Staikouras, for the elimination of capital controls and the ENFIA reductions that he just mentioned.

The United States of course, has the world’s most dynamic economy and we consider Greece to be an important economic partner not just on its own terms, but also as a gateway to the Western Balkans and South Eastern Europe.

We applaud the Greek government’s efforts and will continue to do all that we can to get the word out that Greece is changing fast and is open for business. Prime Minister Mitsotakis’ January 7th meeting with President Trump and his other visits will be an important opportunity to advance this task.

And many American companies are already grabbing this opportunity.  I want to mention four sectors where I see particular dynamism and opportunities for American investment.

The first, of course, is energy.  Last week, Greece completed its section of the Trans Adriatic Pipeline and began the initial stage of the pipeline commissioning process, an important milestone towards the start of commercial gas flows through TAP, which are scheduled to begin in 2020.

TAP represents the largest and most complex greenfield investment in Greece since the start of the crisis.  Together with the Greece-Bulgaria Interconnector currently underway and the proposed Alexandroupoli FSRU, TAP demonstrates Greece’s growing role as an energy hub and guarantee of European energy security and diversification.

This role was reinforced last week when these projects, and Greece’s role, were highlighted in President Trump’s meeting with Bulgarian Prime Minister Borissov at the White House.

Greece also welcomed its first shipment of American LNG last December.  Liquefied Natural Gas exports to Greece have more than doubled over the past year, and LNG is on track to replace Russian gas as Greece’s largest gas source in 2019.  As a clear indication that this is more than just a short-term trend, demand for slots at the Revithoussa terminal far exceed supply in 2020, reinforcing the business case for the Alexandroupoli FSRU.

As TAP and the IGB come online, and as the Alexandroupoli FSRU moves ahead, Greece will be well positioned to help us break the Gazprom monopoly in the Balkan energy market.

There’s also renewed and increased American investor interest in renewable energy, and I am encouraged by the growing array of U.S. companies looking to participate in this sector, including GE, Ameresco, Invenergy and several private equity funds.

Demand for the planned December 12 wind auctions is strong, leading to calls from participants for the government to expand the amount of wind capacity to be offered.

Second, the U.S. Embassy has been working hard to nurture and develop Greece’s emerging innovation sector through our continuing presence, together with AmCham, at the Thessaloniki International Fair and our many entrepreneurship initiatives.

At TIF 2019, Pfizer and Cisco, both U.S. Pavilion Sponsors for the 2018 Fair, announced plans to launch two new innovation centers in Thessaloniki.

Pfizer will open a digital hub in 2020 that will reach 200 employees by 2021.  And Cisco will invest 10-12 million euros to develop a center for smart cities technologies and applications for agriculture.

During the Thessaloniki Summit last month, I was able to visit Deloitte’s new Alexander Competence Center, which trains recent university graduates in the latest technology skills and engages them in challenging analytics, cyber, risk, audit, finance, and consulting projects.  The center employs nearly 250, and plans to exceed 400 employees next year.

And this summer, I was glad to visit the new Tesla drivetrain development center at the Demokritos National Center for Scientific Research here in Athens.

These American investments in digital research and skills development help Greece to capitalize on its dynamic, highly educated local workforce and to grow into a regional hub for innovation in the knowledge-based economy.

Besides Thessaloniki and Athens, Patras, Ioannina and Heraklion have all developed their pieces of Greece’s digital economy. And even little Trikala has made its mark as Greece’s digital city partnering with American technology.

At the Patras Science Park, companies like Think Silicon, which specializes in designing low-power, high-performance microprocessor cores, have opened sales offices in the heart of Silicon Valley.

And on my last visit to Alexandroupoli, I was delighted to visit Dasteri and learn about their success in producing LED lighting products for the U.S. and other markets.

Secretary Pompeo’s visit and the Strategic Dialogue he kicked off last month also is focused significantly on partnership in technology and entrepreneurship, so promoting innovation is now very much part of the core of the U.S.-Greece agenda.

Third, shipping and logistics is another sector where U.S. investment is already making a difference.

This afternoon along with Minister Geordiadis, I will be off to Syros to celebrate the grand re-opening of the Neorion Syros Shipyard after Onex’s successful restructuring.  Onex has so far invested 18 million euros in Neorion and will invest another 12 million euros to upgrade the shipyard by the end of 2021.

These investments have created close to 600 jobs and breathed new life into the island.

Since its restart, Neorion has serviced a record 120 ships, accounting for a 21% revival in Greece’s shipbuilding industry as a whole and reversing a 20-year downward trend.

The United States views Neorion as a strategically important American investment in Greece, and we are working hard to attract more U.S. investment in the Greek maritime sector, a high priority for us given Greece’s critical geostrategic location.

We are encouraged that U.S. investors are looking closely at port privatizations in Alexandroupolis, Kavala, and Volos, and we hope that Onex will be allowed to replicate its success on a much larger scale in Elefsina.

And fourth and finally is the tourism sector, the largest driver of growth in Greece in recent years.  The biggest news, of course, is that Prime Minister Mitsotakis has given new momentum to the Hellinikon airport redevelopment.  Both of the potential American investors, Hard Rock and Mohegan, have pledged to invest over a billion dollars for the integrated casino resort development.

Meanwhile Blackstone recently announced the acquisition of five hotel businesses in a 200-million-dollar deal, and Marriott, Hyatt, and Airbnb are also helping to accelerate the expansion of Greece’s tourism product.

Greece’s trade with the United States rose to 1.42 billion dollars through the first half of 2019, up 22.6% from the same period last year.  Meanwhile, Greece’s exports to the U.S. increased by 56.5% reflecting the strong health of our economic relationship.

Finally and to conclude, I want to briefly amplify Secretary Ross’ recent comments in Washington on Chinese investments.  It is, of course, natural that Greece has a significant relationship with China, one of the world’s largest economies.  We do too, in the United States.

The privatization of the port of Piraeus has been a success, with container shipments rising significantly and the Greek government receiving a significant dividend on its minority stake.

While we see the immediate benefit to Greece, as Secretary Ross warned, the Chinese government “has a history of luring cash-starved nations into lopsided deals that long-term hurt the host country.”

This is especially true as Greece builds out its 5G network, which has such important implications for national security, intellectual property, and the privacy and safety of Greek citizens.

There’s a clear understanding from the U.S. side that if we want to compete for positive influence with global rivals like China, we need to do a better job of encouraging U.S. presence here in terms of investment and technology. So we’re deepening our engagement in these areas helped by the good story that PM Mitsotakis has to offer.

As a direct outcome of that visit, a business Delegation from the State Department’s Office of Global Partnerships will visit in early 2020 to explore investment opportunities in the telecommunications, digital, R&D, and cybersecurity sectors.

I am certain that our trade and investment relationship will continue to grow and deepen in the years ahead, in line with the vision that Prime Minister Mitsotakis and his team have laid out.  Greece is clearly moving forward, and the investment climate here has changed a lot over the past five months.

But I’ve noticed in my travels that perceptions of Greece in the United States and internationally still lag behind this government’s rapid progress.  So in my mind, one big challenge for the U.S.-Greece relationship now is to get the word out in New York in Washington, in Houston in San Francisco and Chicago, about the extraordinary value proposition that Greece represents.

We have to spread the word that this is a new Greece, that companies are thriving here due to Greece’s highly skilled but affordable workforce, its wealth of natural resources, its political stability, and its critical geostrategic position and deepening security relationship with the United States.

During the second Strategic Dialogue the U.S. Government committed to working with PM Mitsotakis’ team to attract U.S. investors and to help Greek companies make the most of opportunities in the U.S. market.

And I am committed, for my part, to putting maximal effort into this agenda, both here in Greece and through my travels to the United States.

So I wish you all a productive conference and look forward to hearing of your future success.