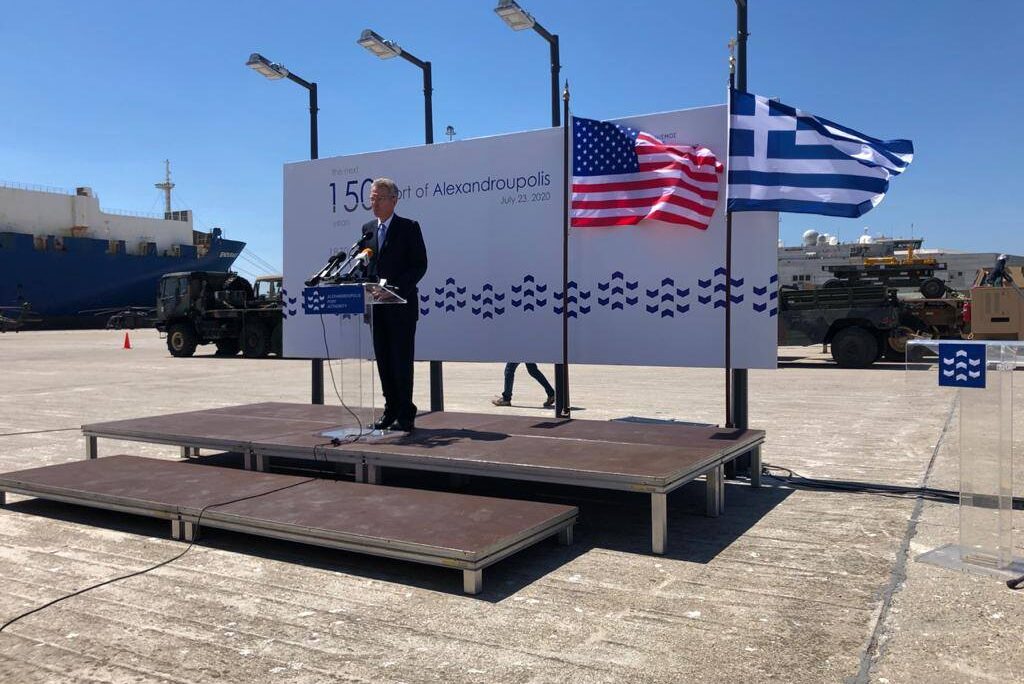 Καλημέρα σας. I’ll start this morning by thanking my friend and travel partner, Defense Minister Panagiotopoulos, for coming up to Alexandroupoli today, but also for everything that you do, Minister, to strengthen our alliance. I also want to acknowledge our allies from the Hellenic Armed Forces, in particular our collaborator Admiral Leloudas, who flew up with us also this morning, as well as the other officials here today: Deputy Governor Petrovits, Mayor Zamboukis, Bishop Anthimos, and Port President Chatzimichail for joining us.

I also want to say a special thank you to the key stakeholders in Operation Atlantic Resolve, Major General Mohan and Brigadier General Sylvia. It’s great to have you and your soldiers here with us in Greece, along with the support of our U.K. Ally represented by General Chestnut. The 101st Airborne is one of the truly storied units of the U.S. Army. I’m very proud to have them with us here in Greece today. But I’m especially excited that we will be welcoming back elements of the 101st this fall as we begin the next seasonal rotation at the Stefanovikio base.

I’m also particularly happy to be back here in Alexandroupoli to celebrate the 150th year of the port’s operation, and to mark what is truly, I think, a historic milestone for this strategic maritime asset and for the U.S.-Greece defense and security relationship, which, as the Minister said, is at an all-time high.

As the Minister recalled, last September, we were here at Alexandroupoli to mark the completion of the $2.3 million U.S. Army-funded project to remove the sunken dredger Olga, which had blocked full access to the pier since 2010. The Olga’s removal improved access and flexibility, enhanced the port’s capacity for multiple users, and increased its attractiveness to American investors.

As a direct result of the Defense Department’s investment in the Port of Alexandroupoli, we are able today to welcome the ARC Endurance, and I have to say, that ship is awesome.

The arrival of elements of the 101st Combat Aviation Brigade onboard Endurance marks the beginning of its Operation Atlantic Resolve rotation and is the first use of the Port of Alexandroupoli for transshipment of equipment by the U.S. Army since the Olga was removed. But I can promise you, it will not be the last.

Our presence here today sends a clear signal to all who are watching that the United States is committed to working with Greece to advance our shared security and economic interests.

Alexandroupoli plays a strategic role in our countries’ common goal of building European energy and regional security. The city is poised to become a regional energy hub with the completed market test for the FSRU terminal and plans for a gas-fired GE power plant; a transportation, defense, and security hub with the geostrategic location of its port, rail, and road networks feeding into southeastern Europe; and a commercial hub with the port’s upcoming privatization.

So I welcome the news that the Ministries of Finance, Infrastructure, and Shipping have worked together to resolve the land issues of the port, and I was delighted to see that Minister Plakiotakis was here just on Tuesday, further evidence that Alexandroupoli is a strategic priority also for the government of Prime Minister Mitsotakis.

The U.S. Embassy has been working intensively to encourage American investment in Alexandroupoli, and our U.S. Development Finance Corporation has identified this complex of projects in northern Greece, including the port privatizations in Alexandroupoli and Kavala, as strategic priorities.

We are proud that the American investment fund Black Summit Financial is leading the way with a strong consortium that includes U.S. investors, Greek participants, and a European port operator with regional experience to bid on the Alexandroupoli and Kavala ports.

As we mark the 150th anniversary of the port of Alexandroupoli, today’s deployment of U.S. forces is proof of the United States’ commitment to advancing the joint defense and security goals that our countries have enshrined through our bilateral Strategic Dialogue and our updated Mutual Defense Cooperation Agreement.

Now there’s plenty of media here today who will want to ask me about what’s happening in the Aegean. So I’m just going to say something right here. I want to echo the clear message from Washington and elsewhere in Europe urging Turkish authorities to halt operations that raise tensions in the region, such as plans to survey for natural resources in areas where Greece and Cyprus assert jurisdiction in the Eastern Mediterranean.

This is a complex strategic space: we want our friends and allies in the region to approach resource development in the spirit of cooperation that provides a foundation for durable energy security and shared economic prosperity. Unilateral, provocative actions work against this aim.

So let me be clear: a stronger and more secure Greece is in America’s interests, and as Secretary Esper discussed with Minister Panagiotopoulos just this week, our work together deepens a very important bilateral relationship and strengthens the NATO Alliance, promoting prosperity and security in this strategic region for all of our citizens. Ευχαριστώ πολύ!