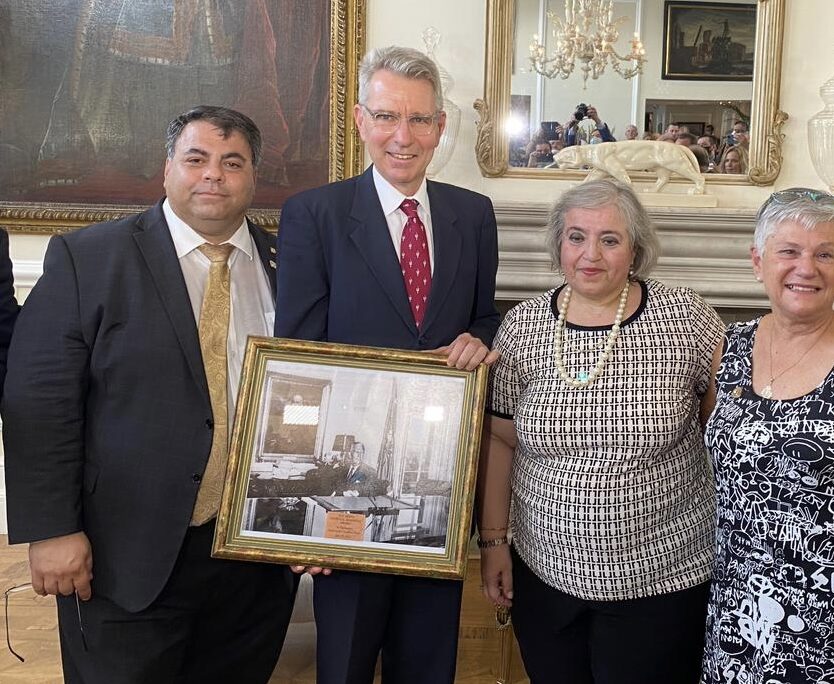 Kalispera sas. Carl, let me start, first of all thank you to you and Cynthia for hosting us. But also thank you for all we were able to do together during your tenure as Supreme President.

Supreme President Horiates, Grand President Kachmarski, Chairman of the Board Karacostas, friends, thank you for having me here this afternoon.

I also want to say what an honor it is to be recognized along with my friend and colleague Ambassador Papadopoulou, who has been throughout her career such a committed partner in the effort to strengthen and deepen U.S.-Greece relations.

Alexandra was an indispensable collaborator as she and I worked together through the first months of Prime Minister Mitsotakis’s government to set the foundation for our strategic relationship. And now, as Greece’s Ambassador to the United States, she is the daily face of the Hellenic Republic as Washington implements President Biden’s directive to build the strongest U.S.-Greece relationship the world has ever seen.

I’m deeply honored to receive AHEPA’s George C. Marshall Award, named for one of the greatest statesmen in American history. Thank you for this recognition, and for all of your support over the past five years. Strengthening our bilateral ties is a group effort, and I am very proud of our team at the U.S. Embassy in Athens, our Consulate in Thessaloniki, and the State Department’s European bureau who share in this honor.

It’s very unusual for an American Ambassador to serve in one place for five years. And Mary and I count ourselves so fortunate to have done so here in Greece. Since most of the officers in our system do three-year assignments, I’ve cycled through multiple deputies, section chiefs, defense attaches, consuls general, and so on.

I’m so grateful to all of them for their energy, initiative, and devotion to the advancement of U.S. interests, and I know they share my sense of great pride about the progress we’ve achieved.

But I do want to say a special word of thanks to one person, Lori McLean, who has served as my administrative assistant through my entire term here in Greece.

Lori has kept me on schedule and on top of the issues through five years of active engagement, countless trips all over Greece, and – I’m not kidding – four or five hundred public events, almost all of which she could never attend. But I’m glad she’s with us tonight. Thank you, Lori.

It’s wonderful to see so many of my fellow Americans back in Greece. For centuries, the ancient Greek concept of democracy and, more recently, immigrants from Greece, have profoundly shaped American identity and values. You all are a vital part of what it means to be American.

And proud Greek heroes like Giannis Antetokounmpo and Pfizer CEO Albert Bourla showcase how much a diverse, internationally focused, and extroverted Greece has to offer and inspire the world.

You are active participants in American democracy, whose love of country, and respect for your ancestral home, have made you some of the best ambassadors for Greece back at home. At the same time, you have risen to positions of great authority in the United States, enriching our society and culture, as I have been reminded this week in hosting my wonderful home state Lieutenant Governor Eleni Kounalakis.

And this year especially, after the ravages of COVID-19, I’m delighted that so many of our fellow Americans are getting to experience the joys of the Greek summer, that all of you in this room know so well.

The extraordinary influx of American visitors to Greece this summer comes at a special moment, as we commemorate the Greek bicentennial and celebrate 200 years of friendship between our countries.

Like the American bicentennial in 1976, this year is an opportunity to reflect on Greece’s past and to look toward its promising future. It’s also a chance to recommit to the values that Greeks and Americans share: our passion for democracy, equality, human liberty, and self-government.

This bicentennial is a chance to recall how the flame of democracy that America’s founders inherited from ancient Athens, 45 years later, fueled the American philhellenic movement. As our young country shaped its international identity, the American philhellenes argued that if our democratic experiment was to succeed, we had to stand behind the Greeks as they sought to break free from the Ottoman Empire.

AHEPA has upheld these shared values for nearly a century, nurturing the bonds between our peoples, standing up for civil rights, and helping the United States and Greece advance our shared goals for peace, stability, and prosperity in this region and beyond.

In the tradition of American philhellenic societies, grassroots civic organizations like AHEPA ensure that the flame of democracy born here in Athens 2,500 years ago continues to shine brightly in America, putting our democratic ideas into action.

For me, this Marshall award, like the AHEPA-funded statue of Secretary Marshall standing outside my office, symbolizes the ongoing friendship between the United States and Greece. It reaffirms our commitment—from the Greek Revolution until today—to support each other through whatever challenges our democracies may face.

Thinking back five years ago to my first meeting with Basil Mossaidis and then Supreme President Andy Zachariades, it’s amazing to see how much progress we’ve made in the U.S.-Greece relationship. Reflecting on President Obama’s visit here in 2016, as Andy and I were doing the other day, it is apparent how far Greece, and our bilateral relationship, have come.

As I detailed at AHEPA’s War Museum event, U.S.-Greece defense and security ties are growing stronger every day, and both our governments, at the highest levels, are committed to increasing the duration and scope of the MDCA to advance our shared security goals.

Greece has also set out an ambitious foreign policy agenda that complements American interests. It’s launching new diplomatic relationships with the UAE, Egypt, and with Israel and Cyprus through the 3+1 framework. Just yesterday, we saw a separate trilateral among three key U.S. regional allies: Greece, Cyprus, and Jordan, demonstrating how Athens is building a new geography of cooperation.

And here in the region, Greece has become a source of stability. With the Prespes Agreement, Greece has rapidly normalized relations with its Balkan neighbors.

Greece is now collaborating with the Balkan countries on energy security and diversification, guiding its neighbors towards Euro-Atlantic institutions, and helping to advance our shared goals for law enforcement and good government.

Greece has proved itself to be a valuable U.S. partner capable of building bridges between our NATO Allies and key regional partners.

In five years, I have seen Greece transition from being a problem for the European Union—a country where officials worried about the stability of the financial system, or Greece leaving the Eurozone—to an examplar of vibrant democracy, good governance, and effective pandemic response, a trusted U.S. partner in a challenging region, and a generator of stability, solutions, and shared prosperity.

Nothing illustrates this reputational transformation better than Greece’s effective, science-based response to the COVID-19 pandemic.

While Greece certainly faced challenges, like every country in the world, the Mitsotakis government trusted its scientists to shape its policy response, sustained the pace of economic reform, even amid lockdowns, and leveraged the difficult conditions of COVID-19 to accelerate its digital transformation.

I am of course proud that the Greek government powered its digital policy with technology from leading U.S. companies like Cisco, Microsoft, Google, Amazon Web Services, and Apple. These technologies facilitated the rapid rollout of distance learning and form the backbone of the government’s e-government, digital vaccination, and vaccine certificate systems.

I’m also very proud of U.S. companies like Pfizer, Abbott Corporation, and Johnson & Johnson for their partnership with Greece in COVID-19 response and their work to strengthen our health care cooperation.

In particular, the rapid development of Pfizer’s COVID-19 vaccine, led by CEO Albert Bourla, a proud son of Thessaloniki, is a success story for transatlantic cooperation as well as a testament to the power of the Greek diaspora.

I also want to express my gratitude to AHEPA for its efforts to provide COVID-19 relief to Greece. At the start of the pandemic, Basil was one of the first people who called to ask me what AHEPA could do to help here in Greece.

And of course, the AHEPA University General Hospital in Thessaloniki, founded in 1947 with AHEPA’s support, became a lifeline for the residents of Northern Greece when that region became ground zero for Greece’s pandemic last winter.

I was so inspired to visit the AHEPA hospital a year ago, and to hear from the doctors and epidemiologists there, who described their participation in the clinical trials for Remdesivir, and their efforts to prepare themselves for the COVID challenges that they knew were lying ahead.

And now, as President Biden underlined to Prime Minister Mitsotakis, the United States is committed to working with Greece to promote sustainable economic recovery from the pandemic and its after effects.

We welcome Prime Minister Mitsotakis’ plans to target most of Greece’s Euro 32 billion EU recovery fund towards investments in digitalization and the green agenda—a move that supports the priorities of the Biden-Harris administration.

These are also areas where we see fantastic opportunities for American investment in Greece, where the United States wants to be Greece’s partner of choice.

Even through this pandemic, top U.S. tech companies like Microsoft, Pfizer, Cisco, Applied Materials, and Deloitte have made major commitments to expand their footprint in Greece, helping to catalyze additional investment and transform Greece into the digital hub of southeast Europe.

The Embassy will also continue to work with American companies and Greek civil society to nurture the entrepreneurial ecosystem and provide opportunities for Greek young people, as we are doing with The Hellenic Initiative’s “Connect the Dots” mentoring program for young Greek entrepreneurs.

In all our Embassy efforts, I have seen that the Greek American diaspora is a force multiplier, strengthening the bonds of philía that help advance key U.S. foreign policy objectives and our hopes for security and prosperity.

During my tenure in Greece, we’ve seen the United States sustain our investment in the U.S.-Greece relationship through three U.S. presidential administrations and two Greek governments.

We’ve also seen dramatic progress in Congress, where strong bipartisan support is reflected in both the 2019 East Med Act and the U.S.-Greece Defense and Interparliamentary Partnership Act recently introduced by Senators Menendez and Rubio.

In sum, we’ve reached a moment in which Greek and American interests in this region are more closely aligned than ever before.

I know from personal experience that President Biden believes deeply in the democratic values that were born here in ancient Athens. He also cares about Hellenism, as he made clear five years ago when, as Vice President, he did me the great honor of swearing me into this ambassadorship. And in his remarks for the Greek bicentennial, he reaffirmed his commitment to taking U.S.-Greece relations to the next level.

This year, as the United States joins Greeks around the world in celebrating the birth of the modern Greek state, we proudly recognize AHEPA’s contributions to our alliance.

Every day, when I come to work and see that famous statue of George Marshall in the Embassy courtyard, I’m reminded of the Embassy’s long-time partnership with AHEPA to tell the story of the enduring connections between the United States and Greece.

I want to thank all of you for your efforts over the years to support the mission of the U.S. Embassy to strengthen the bonds that connect our peoples. We look forward to honoring the unwavering friendship between the U.S. and Greek democracies as we chart an ambitious and bold agenda for an even stronger and more prosperous shared future together. Efcharisto poli.