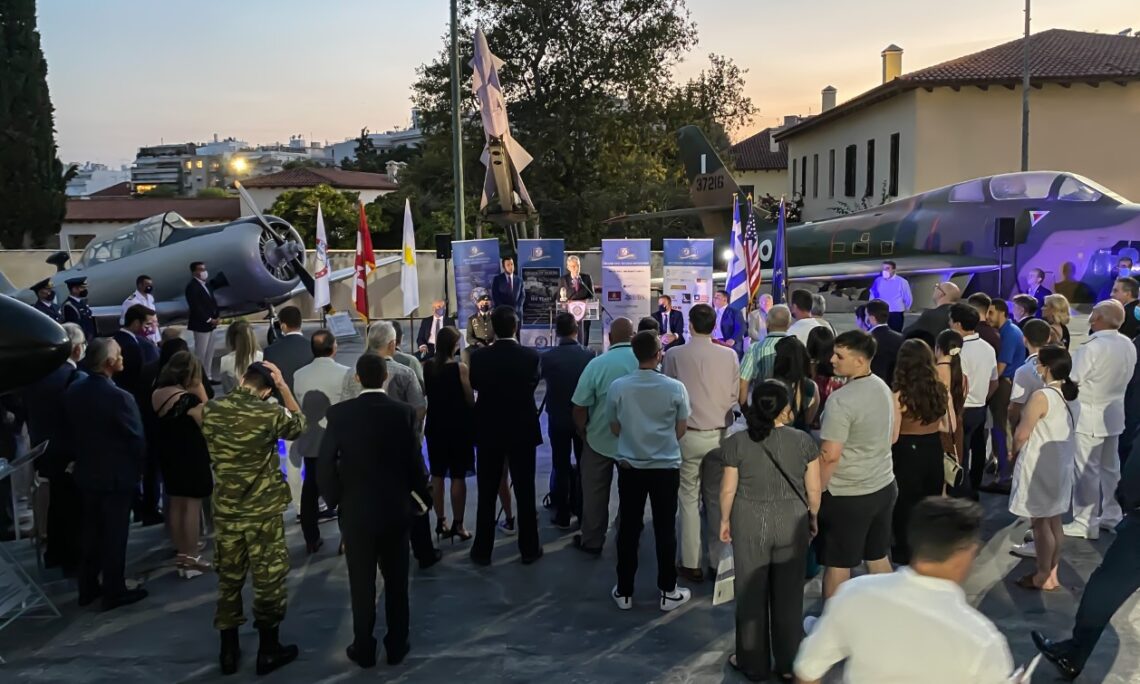 Thank you Basil.  It is great to see so many of my fellow Americans again this evening.  Kalispera sas.  I want to start by expressing my deep gratitude to Supreme President George Horiates, Grand President Celia Kachmarski, Chairman of the Board Nick Karacostas, my good friend Basil Mossaidis, and the rest of AHEPA’s leadership for organizing this event and for bringing us together tonight to celebrate and advance one of the most dynamic and important pillars of the U.S.-Greece relationship: our thriving defense and security ties.

For nearly 100 years, AHEPA has played a crucial role in supporting American veterans and strengthening the military-to-military relationship between our countries.

Through the Congressional Caucus on Hellenic Issues, AHEPA has brought congressional attention to key diplomatic, military, and security issues in the Eastern Mediterranean and Western Balkans, where Greece acts as a pillar of stability, a trusted NATO Ally and partner of the United States.

And you couldn’t ask for a better venue to highlight our defense cooperation with Greece than this museum, which highlights the honor and bravery of the Greek people and the Hellenic Armed Forces from antiquity until today.

I’m grateful and honored to be speaking tonight with my friends Minister Panagiotopoulos and General Floros, who have been such indispensable partners and allies in expanding and deepening U.S.-Greece defense ties over the past two years.  I’m very proud of the recognition they are receiving this evening from AHEPA.  I also want to acknowledge all of our partners from the Hellenic Armed Forces who are here, in particular the Services Chiefs General Lalousis, General Blioumis, and Admiral Petrakis.

Today, our defense and security relationship is advancing from strength to strength, and I think we should all be enormously proud of the transformative work that we have accomplished together.

This year, the United States proudly joins Greece in celebrating its bicentennial and 200 years of friendship between our countries.

But it’s important to remember that unlike the great powers of the day, who supported Greek independence largely for reasons of geopolitics, American involvement was founded on our shared democratic values and the commitment that early Americans felt to the ideals of Athenian democracy.

Two hundred years later, the United States and Greece continue to stand shoulder to shoulder as friends and allies to uphold and defend our democratic ideals.

And as my friends in the diaspora like to point out, Greece has been allied with the United States in every major international conflict through the 20th century.

Together we’ve faced down a civil war, two world wars, the aftermath of World War II, and the Cold War.  Today, we’re working together to build peace and prosperity in the Eastern Mediterranean and Western Balkans and beyond.

And now, we have now reached a moment in which Greek and American interests in this region overlap across a broad spectrum of security issues.

I’m proud to say that the United States’ defense and security relationship with Greece is one of the strongest in Europe, anchored in our countries’ 2019 update to our Mutual Defense Cooperation Agreement.

Both of our governments, at the highest level, are committed to enhancing and deepening the MDCA, reaffirming our resolve to advance joint security goals in this region and beyond.

Major exercises like DEFENDER-Europe 21 have highlighted Greece’s strategic position at the crossroads of Europe, Asia, and Africa.  We’ve seen our joint exercises grow in size and complexity.

This spring, I was proud to participate in my fourth INIOCHOS exercise at Andravida.  I was so impressed to see what a large event INIOCHOS has become—an indication of Greece’s growing role as a regional leader and its power to build bridges between our NATO Allies and key regional partners like Israel, UAE, and Cyprus.

As a result of the MDCA, there’s been extraordinary growth in U.S.-Greece military cooperation at the Port of Alexandroupoli, further validating the investment that the U.S. Army Europe and EUCOM made to remove the sunken dredger Olga from the port basin so that it can support larger vessels.

Today, Alexandroupoli’s strategically located seaport has become a critically important transportation and logistics hub for U.S. Army Europe and NATO, using both rail and commercial line-haul to project military power and resources into Eastern Europe and the Black Sea regions.

This month alone, Alexandroupoli hosted three major force rotations with three separate ship arrivals, moving more than 750 pieces of military equipment.  This is the first time that we’ve been able to simultaneously load and unload two huge military cargo ships, and support the arrival and departure of M1 tanks, Bradleys, and other armored and tracked vehicles.

This logistical milestone demonstrates the utility of the port and the way in which American military cooperation with the Hellenic Armed Forces is enhancing the economic viability of that port.

Under the updated MDCA, we are expanding the scope and the complexity of our daily military cooperation in a way that enhances the readiness of U.S. military forces in Europe but also builds partnership and interoperability between the Hellenic Armed Forces and the United States.  We are increasing our collaboration at Souda Bay, one of the United States’ most important naval facilities in Europe, and we also have expanded operations in Larissa and Stefanovikio.

That’s why I’m so excited about the U.S.-Greece Defense and Interparliamentary Partnership Act recently introduced by Senators Menendez and Rubio.  This act aims to boost U.S. support for Greek military modernization and fosters increased multilateral engagement among the members of our 3+1 framework with Greece, Cyprus, and Israel.

At the USA Pavilion at DEFEA two weeks ago, our AmCham partners highlighted the important role of American industry in helping Greece modernize its forces.  I am very proud that state-of-the-art U.S. defense technology and equipment is helping Greece update its capabilities and strengthen interoperability, including through the F-16 Viper upgrade, the S-70B “Aegean Hawk” overhauls and upgrades, and the P-3B modernization program.

I’m also convinced that Lockheed Martin’s proposal for the Hellenic Future Frigate program represents the most competitive option available to Greece, a generational opportunity to expand our naval partnership.

Lockheed Martin is eager to participate in the renaissance of Greek shipbuilding, and they are also very committed to partnering with our friend George Prokopiou, who has just acquired the Skaramangas shipyard.

But let me be clear: our security relationship with Greece is not just about hardware.  It’s about a commitment to a long-term alliance, in the tradition of the American philhellenes, based on shared strategic interests and values that have united our countries now for 200 years.

AHEPA, as the largest and oldest grassroots association of Greek American citizens and philhellenes, plays a vital role in advancing this long-standing tradition.

President Biden, too, is a great friend of Greece.  He strongly believes that enhancing Greece’s role as a security provider and pillar of stability deepens important regional relationships and strengthens the NATO Alliance.

On behalf of the President and the entire U.S. Mission to Greece, let me conclude by saying how much the United States looks forward to working steadfastly with Greece to build on the remarkable gains we’ve made together over recent years, and to advance our shared goals for peace and prosperity – in the region and beyond.

There is so much we can accomplish together, making both the region and the wider international community safer and more secure.  Efcharisto poli.