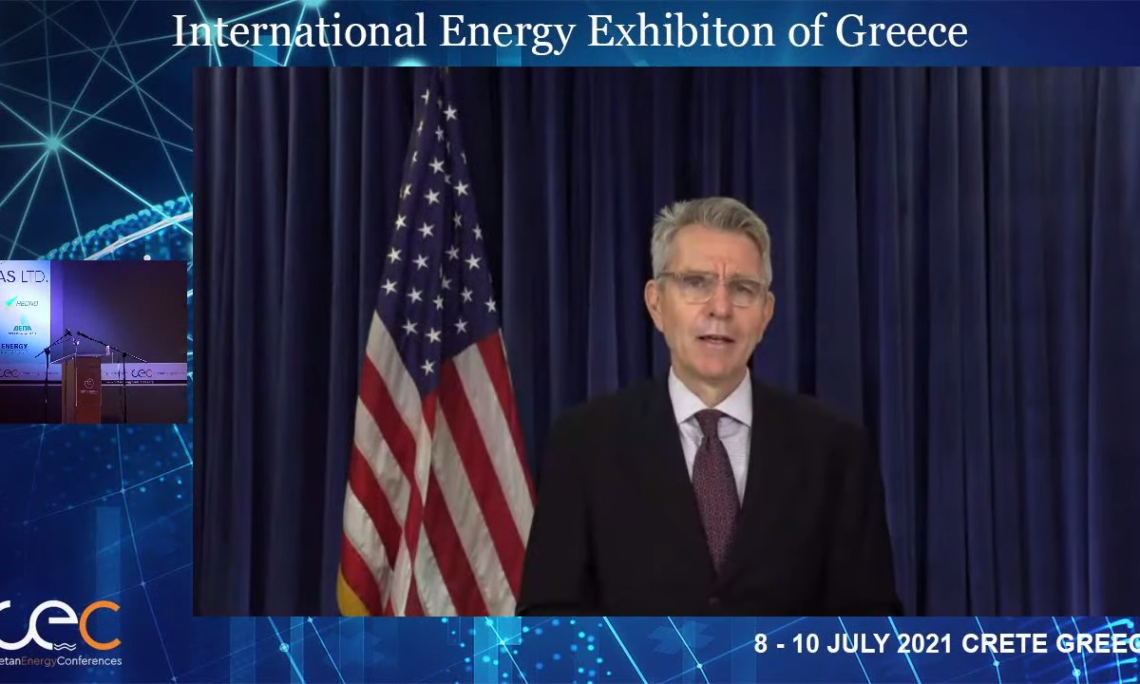 Kalispera sas.  Minister Skrekas, Deputy Minister Stefanis, colleagues, and friends, thank you for inviting me to contribute to today’s important discussion on energy strategies for the region and our global future.

I’m very sorry not to be with you in person on Crete today, and I look forward to returning to the island before too long.  But I’m glad to see that so many of our friends and partners have come together to discuss energy policy and strategy, which is one of the real bright spots of the U.S.-Greece relationship and a core issue that will define our economic growth and security for decades to come.

Let me start by focusing on where we are in terms of U.S. energy policy and our relationship with Greece, and then I’ll discuss the wider region and our global future.

The Biden-Harris administration has placed the climate challenge and clean energy transition at the forefront of the United States’ international energy policy.

President Biden, my boss Secretary of State Blinken, the President’s Climate Envoy John Kerry, and Secretary of Energy Granholm have made clear that climate change is the challenge of our age.  But it is also an opportunity to make historic advancements in global prosperity and the quality of life.  Domestically, the American Jobs Plan calls for massive investments in clean energy research, development, and deployment.

Our Department of Energy is setting new goals for bold, but achievable, leaps in next-generation technologies, including hydrogen, carbon capture, industrial fuels, and energy storage.

The United States is committed to working with our partners around the world to raise our collective ambitions, create jobs for millions of people, and support the planet.  And I can think of no better partner in this important effort than Greece.

Energy cooperation continues to be a guiding star of the U.S.-Greece relationship.

In 2020, we saw robust engagement from U.S. leadership.  This included back-to-back visits from the International Development Finance Corporation, Department of State, and Department of Energy leadership.  These visits highlighted the importance of Greek and regional energy decisions to the United States.

This year, that engagement continues, with a new emphasis on climate change and green energy, where Greece is a true regional leader.

In particular, Prime Minister Mitsotakis’ decision to retire all lignite power plants by 2028, and his plan to target a significant portion of Greece’s 32 billion in EU recovery funds towards clean energy demonstrate his leadership in this area.

Energy cooperation also remains a key component of the U.S.-Greece Strategic Dialogue.  And I look forward to our next Energy Working Group meeting this summer to review everything our countries have achieved together as we chart the course for a greener future.

Looking now at the wider region, the U.S. continues to strongly support efforts by Greece and its neighbors to redraw the energy map of Southeast Europe, diversifying energy sources and routes.

We welcome Greece’s advances with maritime infrastructure investment to support its regional energy projects, and its embrace of technological advancements in green energy.

I applaud Prime Minister Mitsotakis, Minister Skrekas, Deputy Minister Fragkogiannis, and the rest of the Greek government for strengthening energy cooperation in the Eastern Mediterranean and Balkans and exploring ways to leverage existing infrastructure to promote further energy diversification.

Collaborative arrangements like the 3+1 Initiative and the East Med Gas Forum reinforce stability and prosperity in this region.  That’s why we’re also helping Greece build connections along a north-south axis by its participation in the Three Seas Initiative, which promises to further integrate the region with Europe’s energy and communication networks.

Long-term natural gas projects like the TAP pipeline, the IGB, the Interconnector Greece-North Macedonia, the Alexandroupoli FSRU, and the South Kavala underground gas storage tender are critically important for securing access to diverse energy supplies.  By weaning Europe and the Balkans off of their dependence on Russian gas, we are helping to lower prices for consumers and ensure that gas cannot be used as a political tool.

Finally, just as large natural gas reservoirs have been discovered at Zohr, Calypso, and Aphrodite in the Eastern Mediterranean, offshore exploration in Greece holds the potential to help Greece meet its energy requirements in the short term, even as the government accelerates its focus on renewable sources.

And while it’s still too early to evaluate the offshore blocks in Crete, it’s impressive that natural gas reserves are already driving economic development in Israel and Egypt and could help fuel further economic growth, energy stability, and energy transition throughout the region.

The United States sees natural gas as a bridge fuel to a greener future that can help Greece and its neighbors quickly reduce their emissions and accelerate the retirement of lignite power.  For example, in 2019, I joined Prime Minister Mitsotakis at the inauguration of the new Mytilineos natural gas-fired power plant, which features cutting-edge, super efficient GE gas turbines.

When completed, that new Mytilineos power station, one of the largest and most efficient in Europe, will significantly reduce greenhouse gas emissions compared with lignite power plants.  These high-efficiency GE gas turbines will also be used in the proposed Alexandroupoli natural gas power plant that will be co-owned by North Macedonia.

As countries around the region transition to cleaner energy sources, Greece is positioned to be among Europe’s major generators of wind and solar power.

Last month’s renewable auction was over three times oversubscribed and included robust U.S. participation.  So there’s clearly strong interest in the market here.  And I know Minister Skrekas, Secretary General Sdoukou, and their teams are working on additional renewable energy sector reforms, as well as frameworks for critical areas like offshore wind and energy storage.

These are areas where U.S. companies and U.S. technology leads the world, and the Embassy is committed to facilitating U.S. investment in these areas.  I’m proud that the American footprint in Greece’s green energy sector is growing, with companies like Quantum Energy Partners, Fortress Investment Group, Ameresco, Invenergy, and Jasper Energy bringing U.S. investment funds and U.S. technologies to the Greek market.

Growth in the green energy sector benefits both of our countries.    I was in Patras last month, I visited the Greek American company Advent, which is researching the next generation of innovative fuel cell technologies and entered NASDAQ earlier this year.

I also recently met the CEO of Sunlight, which has an impressive production facility in Xanthi and just launched a battery assembly plant in North Carolina.  Sunlight joins other Greek companies like Raycap and Terna Energy which, in addition to support the energy transition here in Greece, are creating jobs and economic opportunities in the United States.

Finally, thanks, to the reform and incentives package introduced last summer by the Ministry of Environment and Energy, I think we’ll continue to see growing U.S. investment in vehicles, chargers, and other related technologies.

The Biden-Harris administration is committed to accelerating the transition to electric vehicles and enabling the United States to become the world’s top electric vehicle manufacturer.

Here in Greece, the American company Blink Charging has established a nationwide network of electric vehicle charging stations, with plans to expand into North Macedonia and Bulgaria from the hub here in Greece.  In addition to its research facility in Demokritos in Athens, Tesla is also entering the Greek market.

Last month, I had the opportunity also to ride a Lime scooter on the promenade in Thessaloniki.  I commend Lime and other micro mobility providers for working with municipalities to integrate their services into the urban transportation network in a clean and sustainable way.

So as the United States joins Greece in celebrating its bicentennial and the 200 years of friendship between our peoples, we’re also working together to ensure that our planet and its rich natural resources can be enjoyed for generations to come.

I’m confident that the close alignment between the Biden-Harris administration and Prime Minister Mitsotakis’ government on climate and the green economy will create many more opportunities for U.S.-Greece collaboration in renewables, energy storage, grid infrastructure, e-mobility, and the circular economy.

Building on the strong foundation of our energy partnership, the sky is the limit as we envision a more sustainable energy future.  Efcharisto poli.