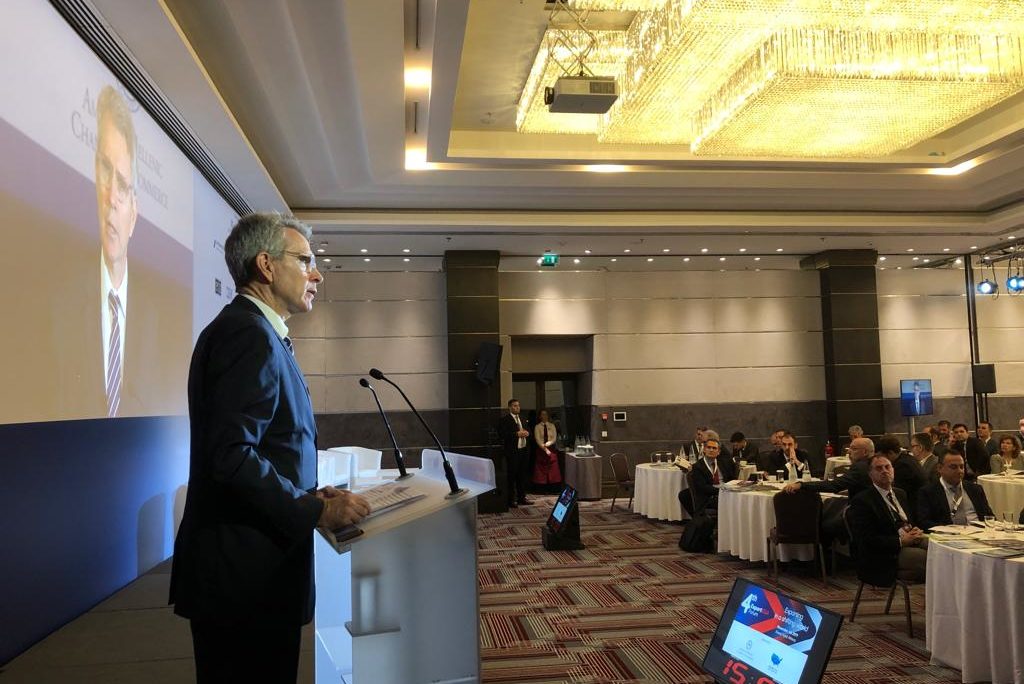 Καλημέρα σας.  Thank you, Niko, Elias.  It’s wonderful to be back today at the Export USA Forum.  You know, as I was reflecting on how much progress we’ve made in the U.S.-Greece trade and investment relationship since last year’s trade and investment forum at the 2018 Thessaloniki International Fair, I was really reminded of how fast things have been evolving in our partnership, and AmCham has been a big part of that, so thank you to the whole team.

I think it’s pretty clear that Prime Minister Mitsotakis’s government has exceeded expectations in its first 120 days, and has done a tremendous amount of work to advance the reform agenda.  As Secretary of State Pompeo, my boss, reinforced in his visit to Athens last month, the United States believes that Greece is making great strides towards creating a more welcoming business climate for investors and entrepreneurs, and that that is helping to grow our trade relationship.

During the second U.S.-Greece Strategic Dialogue that Secretary Pompeo helped to launch, Greece announced, among other steps, progress on protecting intellectual property rights, including long-sought steps to legitimize software used by the government.

And just last week, I had the opportunity to congratulate Minister Georgiadis on Parliament’s passage of the new Development and Investment bill, which we believe represents a big step forward that will reduce red tape and facilitate investment.  The United States applauds all of these efforts and will continue to do all that we can to get the word out that Greece is changing fast and is open for business.

The United States, of course, has the world’s most dynamic economy, and we consider Greece to be an important economic partner, not just on its own terms, but also as a gateway to the Western Balkans and Southeastern Europe, as I was discussing last week when I was in Skopje.

Greece’s trade with the United States rose up to 1.42 billion dollars through the first half of 2019, up 22.6% from the same period last year.  Meanwhile, Greece’s exports to the U.S. increased 56.5%.  And of course, in 2017, the Department of Commerce’s SelectUSA program ranked Greece as the fastest growing source of direct foreign investment in the United States.

During the Strategic Dialogue, our interagency team committed to working with Prime Minister Mitsotakis’s government to help Greek companies make the most of these opportunities in the U.S. market.

Investments in digital research and skills development from companies like Pfizer and Cisco will help Greece to capitalize on its dynamic, highly educated workforce and grow into a regional hub for innovation, energy, and trade.

I want to note that both of these new investments in Thessaloniki were outcomes from Pfizer and Cisco’s participation with AmCham as sponsors of the U.S. Pavilion at the 2018 Thessaloniki International Fair.

Besides Thessaloniki and Athens, Patras and Heraklion have also developed as centers of excellence in Greece’s digital economy.

At the Patras Science Park, companies like Think Silicon, which specializes in designing low-power, high-performance microprocessor cores, have opened sales offices in the heart of Silicon Valley.

Meanwhile, Advent Technologies, co-founded by Patras native and current CEO Dr. Vasilis Gregoriou, specializes in fuel cell and energy storage technologies.  Dr. Gregoriou studied in the U.S. and built over 20 years of experience in the American market.  The company headquarters is in Boston, but it has opened a research and development facility at the Patras Science Park to leverage his students and the human capital available in Patras, producing for customers in the U.S. and beyond.

And in Alexandroupoli a few weeks ago, I was delighted to visit Dasteri and learn about their success producing LED lighting products for the U.S. and other markets.

Another recent success story is the Greek company Theon Sensors’ partnership with Elbit Systems of America, which won a five-year contract to provide the U.S. Marine Corps with Night Vision Goggles.

Our Embassy has been assisting Theon Sensors in partnering with U.S. companies and expanding its footprint in America.

This is a big win for Theon Sensors and for the Greek government, demonstrating that Greek innovation, technical, and engineering skills enjoy American respect.

Another area of dynamism which I know is part of the agenda today is the agri-food sector, and it’s notable that one-third of the Stavros Niarchos Foundation’s 25 million euro donation to the Rutgers University-led “New Agriculture for a New Generation” program will go toward the development of a Food Innovation and Cultivation Center designed to help Greek agri-food businesses with new product development, market analysis, and exports.  Initial architectural and engineering design studies for the center will be completed next summer.

And since the Mediterranean diet is so well known in America, I hope to see more Greek food products like Greek olive oil with its exceptional taste and health benefits make their way to the United States.

And as Minister Voridis and I recently discussed, Greece’s exceptional olive oil now enjoys a significant pricing advantage in the U.S. market compared to its competitors.

And of course, there’s also Greek wines, with their distinctive varieties, which are gaining the recognition they so well deserve.  According to the Greek Wine Bureau in North America, wine exports to the U.S. have increased in value by 39 percent, and news articles about Greece’s premium wines seem like an almost weekly occurrence.

One big advocate for Greek food exports is my friend Phil Kafarakis, the Greek American President of the Specialty Foods Association, who was present at the 2018 Thessaloniki Fair and organizes the Summer Fancy Food Show in New York City.

Through Embassy-sponsored programs, Phil has been able to share his advice with many Greek producers about partnering with U.S. distributors and exporting to the U.S. market.

And finally, another sector where I see great potential for Greek products in the U.S. market is the software and IT services sector, ranked by Select USA as the top sector for Greek foreign investment in the United States.

For instance, Veltio, a successful Greek big data company located in Thessaloniki, serves American clients like Disney and Vodafone, as I learned when I visited their facility last year.

So my message today: first, we recognize that Greece is moving forward and has changed a lot over the past four months.  And second, the American market is open to Greek exports, and our Embassy stands ready to assist Greek companies in expanding to the United States.

I am certain that our trade and investment relationship will continue to grow and deepen in the years ahead, in line with the vision that Prime Minister Mitsotakis and his team have laid out.  And I am committed, for my part, to putting maximal effort into this agenda, both here in Greece and in my travels in the United States.  So I wish you a good conference and look forward to hearing of your future success.