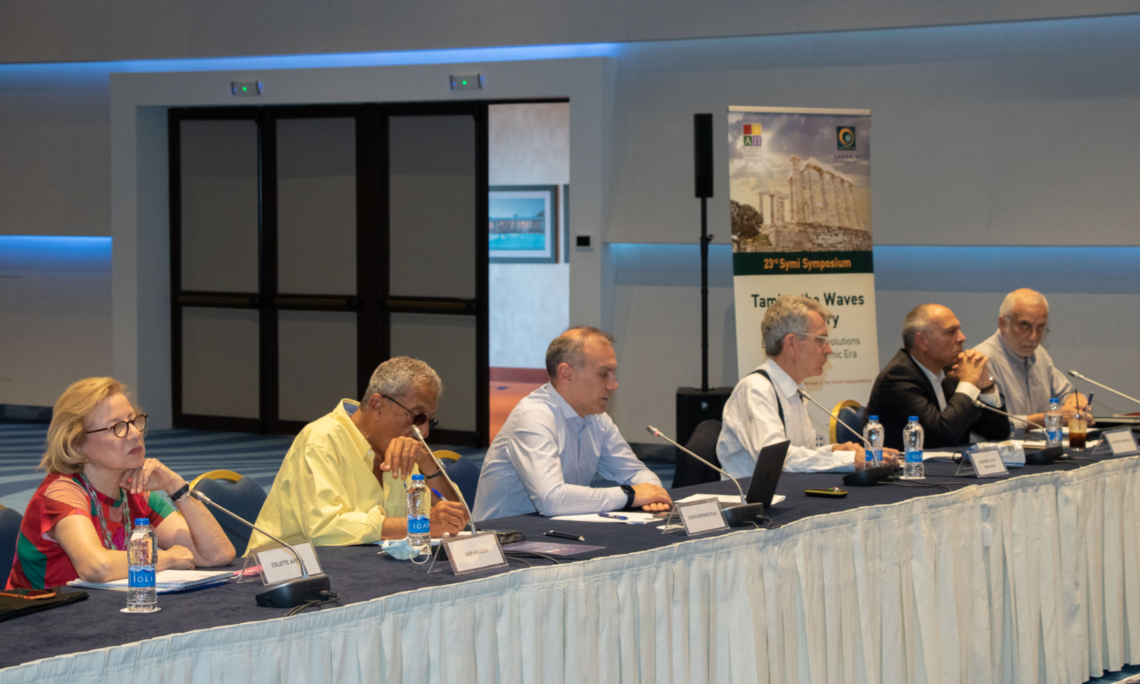 Thank you very much, Professor Filis, Constantinos, to all the organizers and especially Prime Minister Papandreou, George, the whole family.  Thank you so much for giving me the opportunity to share in this discussion.  I’m not spending the whole day out here in Lagonissi, and I apologize for my dress code.  But I will try to respect the informal character of this conversation with my remarks.

I have some prepared remarks but I thought it would be more useful to just put some preliminary ideas out on the table to frame the conversation in hopes that we can have a real dialogue this afternoon.

Let me also say what a huge honor it is for me to be sitting next to my friend and collaborator Admiral Diakopoulos who has been a great friend of the United States throughout his military career, but also through his important role as the National Security Advisor of Greece at a really critical moment.  I said to Admiral Diakopoulos, earlier today I was out at the airport at the DEFEA defense exhibition, and it is really enormously heartening to see how we have managed to strengthen and deepen the defense relationship between our two democracies over the past couple of years.  It certainly reflects a sea change in the political conversation and the environment for the strategic aspects of the U.S.-Greece relationship with my government that President Biden places great importance on.

So Admiral, thank you for what you’ve done over many, many years, but most importantly, congratulations on the legacy that you’ve left behind.

I have five principles which I thought of to frame, thinking about this important East Med region.

First and most importantly is to highlight the degree to which we have arrived at a moment in which Greek and American perspectives and interests on this region overlap almost 100 percent.  We have a common vision in terms of building a region of peace, prosperity, governed by international law.

I had the opportunity to be here in Lagonissi a few days ago, on Friday, listening to both Minister of Defense Panagiotopoulos and Foreign Minister Dendias speak on these issues, and I was impressed by the degree to which we could have simply exchanged each other’s speeches and delivered them for the other.  In particular, I was encouraged to hear Foreign Minister Dendias speak so clearly about the importance that Greece places on energy cooperation including in the context of the global energy transition and Greece’s strong view, this government’s strong view, that these issues are not about excluding anybody.  They are about building a zone of cooperation and prosperity, again, governed by the rule of law, including on energy issues and including through vehicles like the East Med Gas Forum where the United States has strongly participated.  But also, as I said in my own remarks last Friday, focusing increasingly not just on the energy sources of the past but the future, where there’s so much to gain by us working together and when there is so much urgency behind doing so quickly.

The second observation I would make is to highlight my perspective, having now served – I actually hit my five year anniversary in this job later this week.  One of the things that I’ve observed through this period is a rising ambition for Greek foreign policy.  Some of it is a function of a more strategic approach, but to a considerable degree it’s also a function of Greece’s gradual emergence from a very severe economic crisis, which has given the government the luxury of being able to focus not just on the day to day solvency of the financial system or how to address the latest demands of the European Troika, but to really develop a more strategic approach.

And what’s interesting to me is to see how this approach, which now stretches really across an arc of 270 degrees.  Probably the most dramatic demonstration of that more strategic approach is in the Western Balkans.  I’m really delighted to see my friend Deputy Prime Minister Dimitrov here today.  It is a source of great personal pride but also official satisfaction to see how seriously both governments in Skopje and Athens have taken the Prespes Agreement.

I know you heard from my old boss Secretary Albright yesterday.  I remember five years ago when I went to see Madeleine Albright in her office in Washington, DC, she told me two things.  One, she said, “Be in touch with George Papandreou who is a good friend, he’s worked closely with me,” and talked about the relationship that she had enjoyed with Greece in the past.  But also, “good luck to you if you can do anything about that blasted name issue.”  And I know talking to Minister Šekerinska that she was very proud when she yesterday about the progress that’s occurred there.

But it’s really impressive to me to see the quality of cooperation between the two militaries, energy cooperation which has been so transformative with its shared commitments to pipelines, North Macedonia’s investment in clean gas-fired power plants in Alexandroupoli to replace power coming from lignite coal currently.  Or the degree to which the people-to-people relationship is really beginning to open up.

But you see the same thing also looking to the Eastern Mediterranean.  The United States is a strong supporter of what Greece is doing and what Greece has done through two governments — to develop its relations through the 3+1 process with Greece, Israel and Cyprus.  We will continue that cooperation.  These are three democracies where we share values but we also share an outlook on the wider region.

So I place great importance on all of that.  I think it’s quite notable that Foreign Minister Dendias is in Cairo today working on a relationship which is really just one facet of a quite comprehensive Greek engagement with the UAE, with Saudi, all the way through the Persian Gulf.  Which from an American perspective helps to build stability, helps to build relationships in particular with our fellow democracies.

The third principle is really highlighted in the title of this whole conference which is just to reenforce the point that we are living through a period of tremendous change in the international system.  And we have issues where the United States is looking to work with friends and allies to work through these challenges, whether it’s the pandemic and the way in which that’s changing the global economy, the issue of climate, the changing nature of global workforces, and the rise of our adversaries.

One thing that the global pandemic has clearly done is it has accelerated trends that were already underway vis-à-vis in particular Russia and China, two large global actors with a very different view on how the international system should be organized.  And I think in particular the question of China is one that I know makes some people here in Greece uncomfortable, but it is critically important both that we work together as democracies.  And you see the degree to which President Biden has emphasized our commitment to working with European allies on this issue.  But also recognize that this is a government which has a very different view on how human society should be organized, a very different view of the role of international law, and a great deal of ambition about its prospect of imposing its will in particular on neighbors.

The fourth principle is embodied in President Biden’s mantra that America is back.  This is a President who I have worked with closely through my time as Ambassador in Ukraine and I know how much President Biden believes in our alliance relationships.  His foreign policy approach starts from the principle that we can make America safe only to the degree to which we are working hand in hand with allies and partners who share our values.

And I emphasize that first and foremost that concept of values, because this is a President who really does believe in democracy, in rule of law, and in the importance of continuing to invest in those principles and invest in countries that share that outlook.  That certainly informs his view of the relationship with Greece which is one that he has forged literally over 40 years of involvement in Greek-American relations in different capacities.

It is not a coincidence that President Biden’s first trip abroad as President was to Europe — meetings at the NATO summit and at the EU summit.  I think it was a very clear indicator of his belief that if the United States is to stabilize our international role in the aftermath of the global pandemic, we have to first begin by reinforcing our base, and that base is our transatlantic community.

Finally, and here I’ll finish up.  Just to emphasize how heartening it is to me, as a representative of the United States government here in Greece, to be working with a political leadership in Washington that I would argue is probably the most attuned to Greece and Greece’s worldview of any U.S. administration certainly since President Truman and the Truman Doctrine.

We’re not only speaking of President Biden in this regard, but Tony Blinken, our Secretary of State who knows this region extremely well; Jake Sullivan who knows the region, knows the Balkans well, and also who has thought deeply about some of the challenges that the Mitsotakis government is grappling with.  Questions like technology and how technology is changing the nature of democracy and how we need to leverage the positive aspects of that technological change while guarding against the more dangerous and pernicious aspects.

And of course on the congressional side as well, as long as the Senate is in Democratic hands, we have Bob Menendez, who is probably the greatest philhellene in the U.S. Congress today, arguably, as Chairman of the Foreign Relations Committee.  There is a strong alignment of political leaders in the House as well, who know Greece and know the region and recognize the American stake here.

I will finish up by just underlining how important it is that the United States and Greece continue to invest in each other’s success.  Certainly for the United States government and for my team at the Embassy, there is a deeply rooted belief that we actually have a stake in Greece’s success because a Greece which is stable and prosperous and more dynamic in its foreign policy is a Greece that can also help to stabilize the region which at the end of the day is quite far from Washington, DC.

Admiral Diakopoulos knows this much better than I do.  But every time I have the opportunity to get out on a U.S. Navy ship in the middle of the Mediterranean, which we’re accustomed to thinking of as a relatively small body of water, but when you’re floating out in the middle of it somewhere in the Libyan Sea between the southern coast of Crete and the northern coast of Libya, it’s a really big ocean.  And it gets even bigger when you get out into the Atlantic.  So we really do need our friends and allies.

I will finish there.  I’m delighted to be part of this conversation, and I look forward to the discussion that follows.