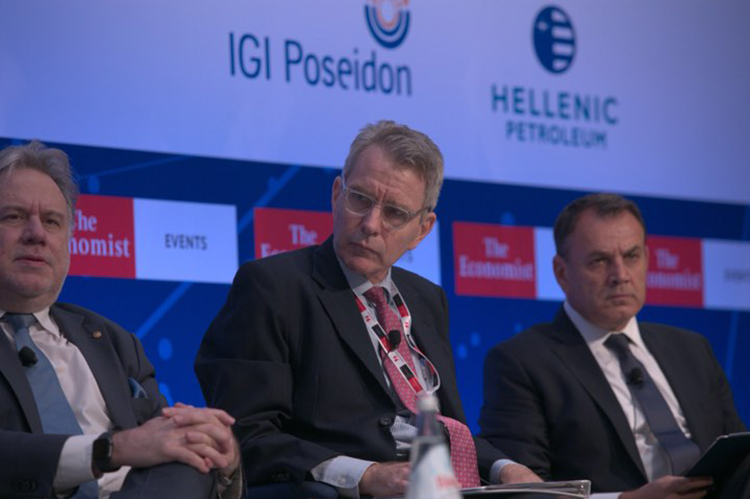 Let me start out by saying what a fantastic honor it is for me to be here up on this panel with Minister Panagiotopoulos, Alternate Minister Varvitsiotis, with Minister Christodoulides, Minister Dimitrov, Admiral Apostolakis. And I also want to say a public thank you to everyone who has reached out to say περαστικά after my accident, and I want to say a public acknowledgement to
my orthopedic surgeon Dr. Polycarpos and all of the Greek medical professionals who helped me to get back on my feet.

This unplanned encounter with the Greek medical system for me has been a fantastic reminder of the Greek concept of φιλότιμο, but also an education in the extraordinary human capital of this country, which is waiting to be unlocked.

Minister Dendias, of course, has a very good reason not to be with us this morning: he’s in Washington, D.C. meeting today with my boss, Secretary of State Pompeo, with National Security Advisor Bolton, leaders in our Congress, including Foreign Relations Committee ranking member Menendez and Europe Subcommittee Chairman Senator Johnson, and other senior leaders. And this is just one of many indications that we are proceeding at top speed on U.S.-Greece relations amid Greece’s political transition.

Given the theme of this year’s conference, and this idea of uncertainty and indecisiveness in Europe, I also want to congratulate the Greek people, Prime Minister Mitsotakis, and his cabinet on the elections, which demonstrated the resilience of Greek institutions and democratic values through a decade of unprecedented financial strain and external uncertainty.

Last week, we witnessed a seamless transition from the Tsipras administration, which did so much good work to help Greece strengthen its ties with America, to the Mitsotakis government, the first to lead Greece in the post-bailout era.

Greece has persevered through immense challenges while maintaining its democracy, rejecting extremism, and now paving the way for further economic growth.
Importantly for my government, Greece has also transformed from being a source of problems to a source of solutions for the strategically important region of the Eastern Mediterranean.

Greece is a pillar of stability in a difficult region, and a country that shares key strategic goals with the United States across a 270 degree arc of challenges, from the Western Balkans to the Black Sea, the Eastern Mediterranean, and the Levant.

The congratulatory calls from President Trump and Vice President Pence to Prime Minister Mitsotakis, Minister Dendias’s light-speed engagement with his American counterparts, the support for our agenda going forward that I heard last week on the telephone call with Secretary of Commerce Ross, and my extremely positive first formal bilateral meeting with Defense Minister Panagiotopoulos, as well as the warm Congressional welcome for the new government, show that U.S.-Greece relations are on the best possible footing.

The United States looks forward now to working with Prime Minister Mitsotakis and his team to take our already excellent bilateral relations to the next level.

We are excited to build on the 2018 Strategic Dialogue to future-proof the gains in the U.S.-Greece alliance, especially on energy, bilateral trade, defense, regional stability, and people-to-people ties. I’ve spoken with several of the new ministers to discuss areas where we can increase cooperation, and I’m encouraged by their desire to act quickly and decisively to deepen our ties and aid Greece on its path to economic recovery and growth.

Together, we’re looking forward to major events in the months ahead like the Delphi Forum, Kathimerini conference in Washington in November, another round of the Greece-Israel-Cyprus 3+1, and the next Strategic Dialogue here in Athens.

This transition in Greece comes at a particularly important moment when renewed great power competition is testing Greece’s regional role. Greece guards Europe’s Southern Flank, and increasingly, the significant energy, commercial, maritime, and communications resources that pass through this region. We believe that U.S.-Greece cooperation on all fronts—and especially on defense and security—will only enhance Greece’s ability to promote peace and stability in the Balkans and Eastern Mediterranean.

So we applaud Greek leadership in strengthening ties with neighbors, especially through ongoing collaborations like the Greece-Israel-Cyprus trilateral, which has such important implications for regional energy and defense cooperation.

The U.S. strongly supports the trilateral and plans to build on Secretary Pompeo’s participation in the 3+1 leaders meeting in Jerusalem last March. With the new government in place, we are already scheduling the next rounds of meetings to continue our close cooperation on these regional economic and security issues, and in this regard, I’m pleased to announce that our Acting Assistant Secretary for Europe, my friend and colleague Phil Reeker, will be here in Athens next week to continue the acceleration of our engagement.

In the Balkans, the United States is focused now on completing North Macedonia’s entry into NATO. We are encouraged by Greece’s new role in NATO air patrols in North Macedonia, just as the Hellenic Air Force continues to provide air policing in Montenegro.

The Thessaloniki International Fair in September, the Thessaloniki Summit in November, the AmCham’s regional energy conference in Thessaloniki will provide opportunities to deepen business ties from Greek Macedonia to the Balkans, and to leverage Greece’s capacity to help all its Balkan neighbors, and North Macedonia in particular, to continue progress towards European and Euro-Atlantic institutions.

We also commend Greece on its efforts to stabilize the relationship with Turkey, beginning with the recent talks on confidence building measures. The U.S. sees eye-to-eye with Greece on this issue. No one can afford an accident or any other incident that might lead to conflict between NATO allies in the Aegean, and that is why the State Department has been so clear in calling on Turkey to refrain from actions that increase tensions.

In this context, it was an encouraging sign that President Erdogan was the first foreign leader to reach out to Prime Minister Mitsotakis after his election.

You all will have seen the State Department’s July 9th statement urging Turkey to halt its “repeated attempts to conduct drilling operations in the waters off Cyprus.” Our goal is to stop provocative actions and increase dialogue among regional neighbors in order to promote greater stability and shared economic prosperity.

We want energy to be a driver of economic opportunity—including with projects like the TAP pipeline and Greece’s new offshore exploration agreement with Hellenic Petroleum, Total, and ExxonMobil.

Minister Dendias has indicated that Prime Minister Mitsotakis will seek the broadest possible consensus on foreign policy issues, and on that note, I particularly admired the change of administration at the Ministry of Foreign Affairs, where Minister Dendias and outgoing Minister Katrougalos provided all democracies with a model for a peaceful and dignified handover. And in terms of U.S.-Greece relations, we fully anticipate continued broad political support, in Greece, for advancing our alliance.

Of course, the U.S. also appreciates Greece’s commitment to maintain its 2 percent of GDP defense expenditure to meet the NATO benchmark for defense spending. In this regard, I would be remiss not to acknowledge the central role of defense and security cooperation in the U.S.-Greece relationship going forward, and also to acknowledge the presence here of Admiral Apostolakis, who played such an instrumental role over several years as chief of defense and later as minister in helping us bring our defense and security cooperation to an all-time high. Thank you.

Finally, I want to add a note of thanks for Prime Minister Mitsotakis’ recent decision to recognize Venezuela’s interim President Juan Guaido. We appreciate Greece’s leadership on this issue, which reaffirms its status as the birthplace of our democratic values.

The Balkans and Eastern Mediterranean have emerged as an important energy hub with a direct impact on Europe’s energy security and diversification.

Since the U.S. has a strategic interest in the energy security of our European partners and allies, we are working towards high-level U.S. participation at the July 25 Eastern Mediterranean Gas Forum in Cairo. Here, too, Greece plays a pivotal role.

I hope Cairo will provide the opportunity to kick off the energy policy dialogue with the Mitsotakis administration. And based on my three years of conversations with Prime Minister Mitsotakis, and the fact that it was New Democracy that set the transformational Trans Adriatic Pipeline in motion, I have full confidence that our excellent cooperation on these issues will only accelerate under Minister Chatzidakis, who I look forward to hearing from later this afternoon.

At his handover ceremony, Minister Chatzidakis expressed the government’s commitment to completing all international natural gas projects, fast-tracking hydrocarbon exploration and development, and increasing the emphasis on renewables. American companies are global leaders in all of these sectors.

I’m thrilled that the Trans Adriatic Pipeline’s first gas delivery has been set for 2020, and plans are moving forward for a market test to double the pipeline’s capacity in the next few years.

Similarly, the start of construction on the Gas Interconnector Greece-Bulgaria and the significant increase in American LNG purchases by Greece demonstrates that global gas markets are changing rapidly. LNG buyers are on the rise, while negotiations with traditional pipeline suppliers in Europe now focus on price and volume reductions. Greece, with its expanded Revithoussa terminal and plans to add a Floating Regassification Unit in Alexandroupoli, is leading the way on regional energy diversification.
And after the signing ceremony last month, I hope that one of the new Parliament’s first actions will be to finalize the lease agreement for the hydrocarbon exploration block in west Crete that was provided to ExxonMobil, Total, and Hellenic Petroleum. The United States is eager to help Greece unlock more opportunities like this for large-scale foreign investment, and energy is one of the sectors with the greatest potential to attract new U.S. investors, like the GE wind energy park that I recently helped to inaugurate in Kato Lakomata.

So, as you can see, Greece plays a decisive role in the U.S. strategy for a peaceful and prosperous Europe, and our confidence in and support for the new government could not be stronger. This is a moment of great optimism in U.S.-Greece relations, but also of unparalleled opportunity. Ευχαριστώ πολύ.