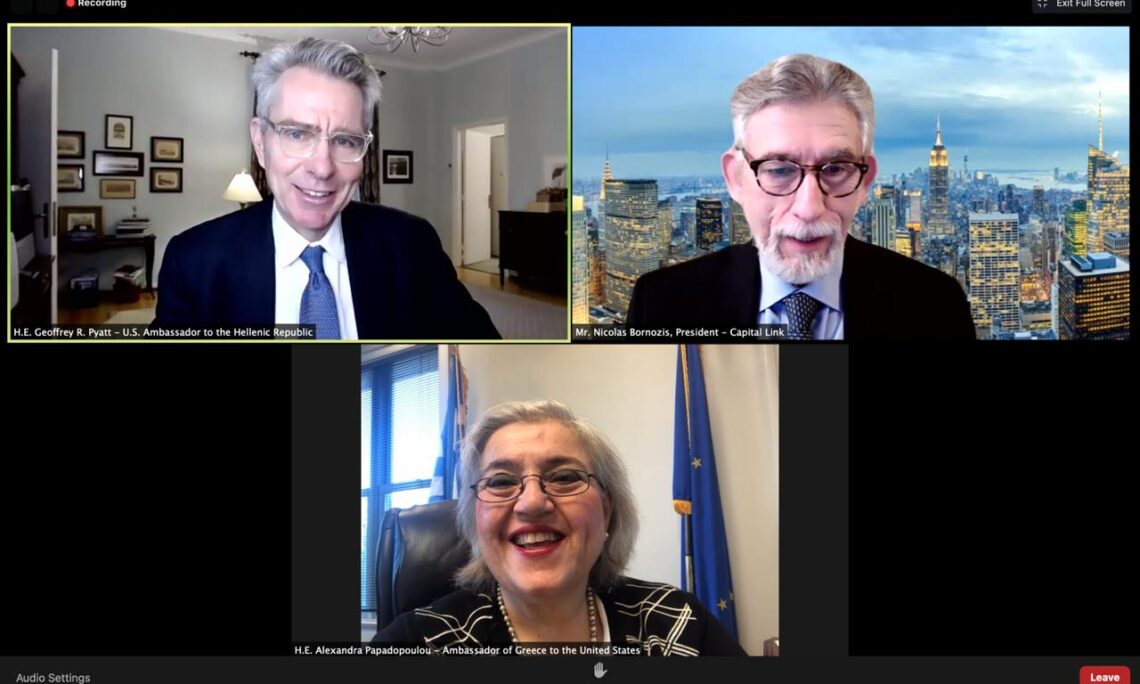 Thank you, Nico, and good morning,καλημέραeverybody.  Ambassador Papadopoulou, friends, it’s a pleasure, really, for me to speak at another Capital Link Invest in Greece Forum and to see so many prominent folks from both sides of the Atlantic in this year’s program.  I’m only sorry not to be doing it in New York this year.

I particularly want to thank Nico and the Capital Link team for your ongoing efforts to highlight the unique value proposition that Greece represents for American investors.  And if I can leave you with one idea today, it’s that despite a pandemic-induced global slowdown and the huge challenges that COVID-19 has created for all of us, Greece, from the perspective of the American government, is on the right track and moving forward, and indeed, as Ambassador Papadopoulou just described,U.S.-Greece relations have never been better.

I also want to say what a great pleasure it is to be speaking here with my friend Alexandra.  She’s played a crucial role in U.S.-Greece relations since July 2019, when Prime Minister Mitsotakis took office, and as we worked to sustain positive momentum after that election.

At the Prime Minister’s office, she was an essential partner in our work leading up to Secretary of State Pompeo’s first visit to Greece in October 2019, and the signing then of a really pathbreaking new Mutual Defense Cooperation Agreement between our two countries.  So while I was very proud to see her named as Greece’s Ambassador to Washington early this year, I was also very sorry to lose her as an interlocuter here in Athens, and I’m really glad today to revive our partnership for a little while.

Of course, Ambassador Papadopoulou’s first big project as ambassador was Prime Minister Mitsotakis’ visit to the White House back in January, which really does feel like a lifetime ago.

I remember then when the Prime Minister was in the Cabinet Room, he said to the President and much of the cabinet that he wanted to see the U.S.-Greece trade and investment relationship rise to the same high level as our defense and security cooperation.  And I want to underline today that the United States shares that goal.

Over the past year, Prime Minister Mitsotakis’ market-friendly reforms have enhanced Greece’s reputation as a trusted destination for American investment, paving the way, in particular, for Greece’s emerging knowledge-based economy.

When I’ve spoken to previous Capital Link sessions in New York, I was often asked questions about the banking system and non-performing loans.  In that context, it’s great to see that Greek banks are shedding a good portion of their non-performing loans by tapping into the new state-supported securitization program, Hercules.

As The Wall Street Journal just recently reported, Alpha Bank has reported that it is in the final stages of selling a 10.8 billion euro gross loan portfolio along with its loan-servicing unit.  The preferred bidder for that transaction is U.S. investment firm Davidson Kempner Capital Management LP for what would be, if completed, Greece’s largest-ever non-performing loan sale.  And two more big banks, The National Bank of Greece and Piraeus Bank, each aim to sell around 7 billion euros each in loans next year.

So the Hercules program is helping to usher in global and especially American investors to Greece even during the pandemic.

Another good news story I’d like to highlight is thetremendous progress that Minister Pierrakakis and his team have made in digitizing government processes during the pandemic.  The Greek government has increased protection of intellectual property rights, which led to Greece’s removal from the USTR Special 301 watch list in April, after 12 years.

As a direct result, Greece’s relationship with Microsoft has grown dramatically. In October, Microsoft announced that it will invest hundreds of millions of dollars in a complex of data centers around Athens, the largest that it has ever made in its long history here in Greece.  Microsoft has also acquired this year the Greek company SoftoMotive and announced that it will launch a robotic process automation hub here in Athens.

Supported by the Embassy’s continued engagement in northern Greece, especially our presence at the 2018 and 2019 Thessaloniki International Fairs, American companies like Pfizer, Cisco, and Deloitte are expanding their footprint in Thessaloniki and contributing to its development as a regional innovation hub.

These companies are investing in Thessaloniki’s strategic location as a gateway to the Balkans, and the highly skilled workforce offered by the city’s outstanding educational institutions.

When Secretary of State Pompeo, my boss, visited Thessaloniki in September, he highlighted that city’s potential as a technology hub of the Balkans, as well as Greece’s and especially Northern Greece’s critical contributions to European energy security.

With the recently completed Trans Adriatic Pipeline, the under-construction Greece-Bulgaria Gas Interconnector targeted for completion next year, the Alexandroupolifloating storage regassification unit, and new planned connections to North Macedonia, Greece and its neighbors are literally redrawing the energy map of Southeastern Europe, diversifying sources and routes.

These coordinated actions will help to unlock the Western Balkans’ dependence on Gazprom in favor of LNG, promoting greater regional trade and more stable and prosperous prospects for the region.

We are very pleased that LNG, a cheaper and more secure energy source than Russian pipeline gas, will flow through these new infrastructure projects.  For the first nine months of 2020, almost half of the LNG coming into Greece originated from the United States, nearly four times the amount imported in the same period of 2019.

We are also proud that two American groups have declared interest in the privatization of the ports of Kavala and Alexandroupoli, which the U.S.Development Finance Corporation has identified as strategic priorities because of their geographic location and synergy with energy projects like the TAP, the FSRU, and the South Kavala underground gas storage facility.

In addition, the ever-deepening U.S.-Greece defense and security relationship has provided stability and helps to boost investor confidence in Greece.  We are very pleased, for instance, that the U.S. Navy has certified the Syros shipyard to conduct maintenance of U.S. military vessels, and we strongly supported the U.S. company ONEX’s efforts to finalize the acquisition of the Elefsina shipyard near Athens, in collaboration with the Development Finance Corporation.

Through Greece’s upcoming Hellenic Navy Modernization Program and the construction of new and upgraded frigates, these investments will help to bring new and expanded capabilities to Greece’s existing military forces and jumpstart a domestic shipbuilding industry where Greece has traditionally excelled.

And with his ambitious goal to close lignite power plants by 2028, Prime Minister Mitsotakis has also set a bold green agenda, recognizing that renewables are the future.  The United States wants to be part of that story. Natural gas will serve as a key transition fuel while U.S. companies like GE and Amaresco are helping Greece to unlock its green potential by taking advantage of its bountiful thermal and wind resources.

GE has just completed the new Zarakes 16 MW Wind Farm in Evia, which was financed by Florida-based Jasper Energy, and Ameresco is working with PPC Renewables on a variety of wind projects.

We welcome continued reforms in this sector to streamline the process for licensing renewable energy projects, and we hope to see more U.S. investment in emerging sectors such as energy storage and offshore wind.  Combined with Greece’s plans to expand its energy interconnections and revitalize its ports, these investments will help to further Greece’s role as a premier regional energy hub.

And I’m very pleased that tomorrow, the Embassy and I will be able to welcome U.S. Secretary of Energy Brouillette for a two-day visit to Athens that will serve as a capstone to this year of unprecedented progress in U.S.-Greece energy relations.

And finally, in the tourism sector, Mohegan Gaming and Entertainment is ready to begin work on the casino project at old Hellinikon airport, which will create 7,000 jobs and provide work to many Greek construction and law firms and banks and others.  Mohegan’s investment plans will transform the Athens Riviera and help the country to rebound during its post-pandemic recovery.

Over the past few years, I want to emphasize that Greece has become a country that can deliver solutions to the challenges that the United States faces in the Eastern Mediterranean and Western Balkans.

Breakthroughs like the Prespes Agreement and Greece’s network of trilateral relations in the Eastern Mediterranean have helped to reposition Greek diplomacy, and the Greek government’s responsible management of the pandemic has raised its standing internationally.

Combined with its internal reforms and the all-time high in U.S.-Greece relations, I am confident that Greece has found a recipe for economic success.

American companies are coming to Greece to invest because of the value and stability that Greece offers, and because our nations are united by our belief in hard work, creativity, and our shared democratic ideals.

For years, the U.S.-Greece relationship has enjoyed strong bipartisan support, and that support is going to continue as we transition to a new administration in the United States.  Indeed, President-elect Biden and his team know Greece very well and understand Greece’s critical role as a pillar of stability and prosperity in the Eastern Mediterranean and Western Balkans.

So together, we’re going to continue to build on the very strong foundation of the past several years, and I expect we will take our economic relationship to even greater heights in 2021.  Ευχαριστώ πολύ.