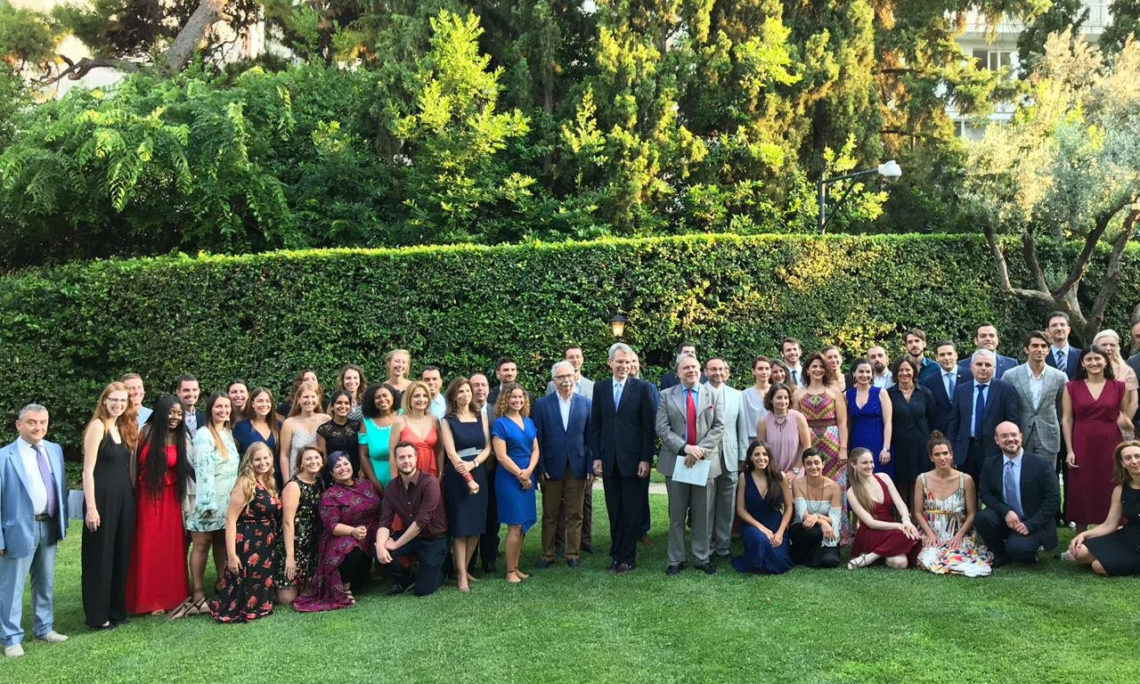 Καλησπέρα σας.  Thank you, Artemis. It is a wonderful pleasure to welcome everybody here this evening.  This is truly one of my favorite events of the year, and, as Artemis noted, I am especially pleased that we are doing it this year with the backdrop of this wonderful horizon sculpture by one of our most distinguished Greek Fulbright alumni.

Minister Gavroglou, members of the Fulbright Board and staff, Fulbright scholars and students, family, Fulbright Foundation donors, and distinguished guests, thank you for joining us to celebrate this year’s outstanding class of Greek and American Fulbright scholars. And I also want to acknowledge, because I know he is going to arrive in the middle of my remarks, Minister of Foreign Affairs Katrougalos, who looks forward to joining us as well as soon as whatever crisis of the afternoon has arisen is taken care of.

I want to start my remarks this evening by highlighting my appreciation for the progress that we have made in the educational partnership between Greece and the United States over the past year.

This year, the Greek government resumed its contributions to the Fulbright Foundation, reaffirming its commitment to the continued success of the program, and this was a specific outcome of the U.S.-Greece Strategic Dialogue led last December by Secretary of State Pompeo and Minister Katrougalos, but it is also an important symbol of the commitment of both of our governments to our enduring people-to-people ties.

The education sector is one where we can do much more together, and I know this a view shared by everyone here tonight, regardless of their political perspective.  With any luck, the year ahead will see even more educational partnerships with U.S. institutions in Greece, more students and scholars moving in both directions, and even deeper ties between the research institutions that are building the future of our knowledge-based economies.

And as the Strategic Dialogue lays out, there is a framework for collaboration between our governments, which we anticipate will support continued growth in the future in this area.

Now in its 71st year, the Fulbright program, as Artemis noted, is the oldest Europe and the second oldest in the world.  Over 5,500 Greek and American citizens have crossed the Atlantic on Fulbright scholarships to participate in academic and artistic exchanges.

Among the Fulbright alumni here in Greece are a Prime Minister, a Nobel laureate, several ministers and parliamentarians, and countless leading academics and artists.

We also have a growing contingent of Fulbrighters at the Embassy.  These alumni—and now you—continue a tradition of deep cooperation, friendship, and shared ideals that stretches back to the founding of our modern nations.

This year, 38 Greeks and 40 Americans have served as cultural ambassadors through the Fulbright program, collaborating and creating with colleagues in their host countries; sharing their ideas, experiences, and values; and accomplishing what Senator Fulbright envisioned for his namesake program so many years ago: humanizing international relations by turning nations into people.

To give you a sense of these impressive and diverse projects, I would highlight just two of this year’s fellows and their work.

From the American Program, David Crespy, a professor of playwriting, composed a trilogy of stage dramas, which explore the experiences of a Jewish family in Thessaloniki.

And from the Greek Program, Aikaterini Kalafati Michailaki, a criminologist, will visit The Chicago Project on Security and Threats to research terrorism and the process of radicalization.

David and Aikaterini are just two examples of the richness on both sides of our academic relationship.

And I am confident that the contributions that each of you make in your respective fields will be as lasting as the bonds you form with your host countries.

As Fulbright enters its seventh decade with a new logo that, for me, evokes the magical blues of the Aegean Sea, it’s clear that Fulbright Greece is at the forefront of a dramatic rise in U.S.-Greece educational and cultural exchanges.  Over the past six years, the number of Americans studying in Greece has increased 80%, and the number of Greek students studying in the U.S. has grown nearly 20%.

In April, I was pleased to join as Fulbright supported our Consulate General in Thessaloniki in hosting the first-ever Gilman Scholars Regional Career Summit in Europe.  We made a deliberate choice to bring 39 diverse and talented future American leaders to Greece, to solidify the bonds we share and to tap into the great potential of Thessaloniki, which is reestablishing its historical role as the commercial and energy gateway to the Balkans.

During the Summit, the students learned about international career opportunities while exploring the cultural gems of Thessaloniki.  These articulate and engaging young leaders asked me smart, thoughtful questions about my career in the Foreign Service, eager to make the most of this brand-new experience, and I hope I convinced at least a few of them to give the American Foreign Service a try.

The students I spoke with were incredibly impressed by the wealth of opportunities in Thessaloniki, especially after their trip to the university’s technology park and their meeting with the IT company Veltio.  I know they were charmed by the warmth and hospitality of their Greek hosts and will return to the U.S. as ambassadors for the richness of Macedonian culture.

We also just launched the Future Leaders Exchange Program in Greece, or FLEX.  In the fall, 10 Greek students will travel to the U.S. for one year to live with a host family while they attend American high schools.  This transformative experience is also an investment in our nations’ common future, as we nurture new leaders who embody the deepening ties between the United States and Greece.

Fulbright Greece gets more applications every year as American scholars recognize Greece as a vibrant intellectual hub that is central to global conversations about democracy, migration, renewable energy, innovation, and of course the arts.

Greek scholars, in turn, find synergy between their work and the unmatched opportunities offered by American universities.

So in closing, I’d like to thank Artemis and her fantastic Fulbright team for everything they do to make this program such a tremendous success.

And, of course, my deep thanks to the many committed donors of the Fulbright Foundation in Greece.  Every year, these corporations, foundations, and individuals reinvest in the power of educational exchange and the extraordinary scholars who are gathered here this evening, whose work and experiences weave our nations ever closer together.

Thank you very much. Ευχαριστώ πολύ.