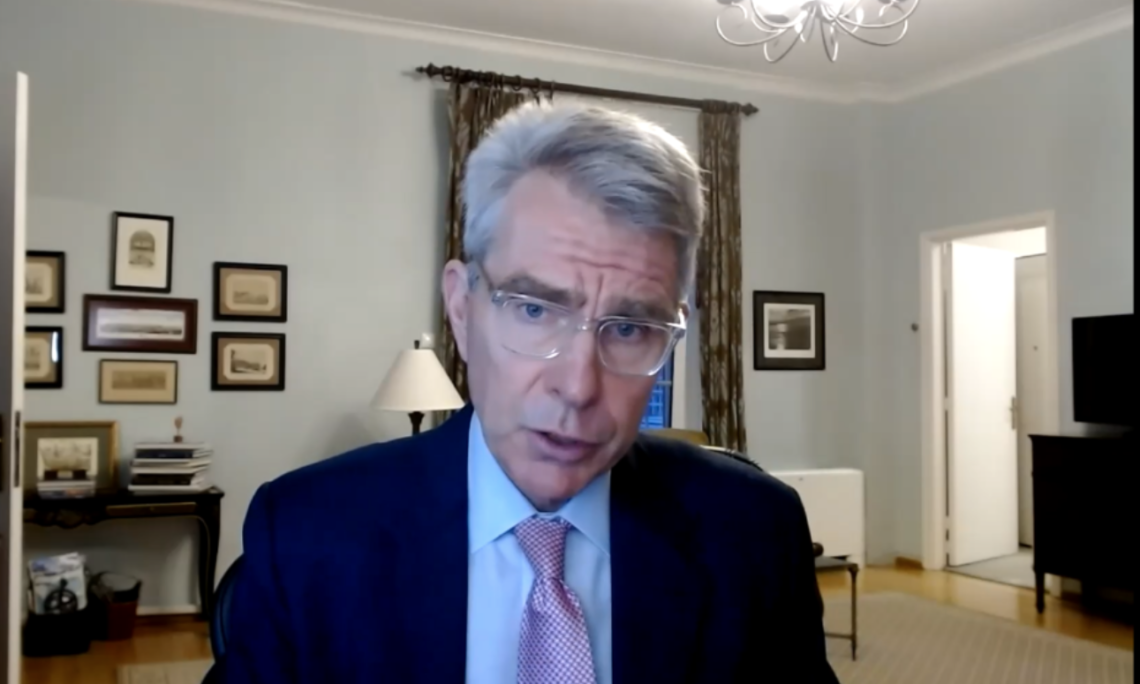 Thanks very much Liz.  First of all, let me say thanks to you.  Thank you especially to Dr. Saltiel and thank you Vice President Sefiha for joining us.  It’s a fantastic honor for me to be with you this evening for what has become now a 16-year tradition of the Consulate in honoring the memory of David Tiano.

I am especially glad that Liz and the Consulate team have been able to bring us all together on this virtual platform.  I hope next year’s lecture will be live and in person.  Let us all hope.

As Liz said in her remarks, this lecture series is a powerful way for us to preserve the memory of one of our colleagues, not only for audiences today but also for future generations.  In this same spirit, I want to say how immensely proud we are at the Embassy of the efforts that Greece has made over the past couple of years to expand our knowledge of the Holocaust as it was experienced in Greece and, also, to further educate the wider public.

It’s worth noting that in 2020, Prime Minister Mitsotakis became the first ever Greek Prime Minister to visit Auschwitz and, in so doing, honored the almost 60,000 Greek Jews who perished there.

Last year, of course, the United States and Greece were celebrating the Greek Bicentennial and 200 years of friendship and our shared democratic values.  But, 2021 was, also, importantly the year that Greece assumed the presidency of IHRA, the International Holocaust Remembrance Alliance, which is a 34-country group committed to combatting Holocaust denial and anti-Semitism.

I really want to commend the Greek government, including in particular Deputy Prime Minister Pikrammenos on the great work that the government has done during this IHRA year and a real special thank you to my colleague Ambassador Chris Lazaris who led the Greek government’s efforts in this regard.

I’m very much looking forward to, as part of this year-long effort, joining Minister of Education Kerameus and many others in the upcoming international conference on the Holocaust that we will attend next week in Kalamata.

Working with the Ministry of Education and Religious Affairs, the Embassy has been very proud to support this Kalamata initiative in order to bring together scholars, researchers, historians, students, and citizens to share their experiences and perspectives.

I, also, want to say how happy I am to see further progress being made on the Holocaust Museum of Greece that will be based in Thessaloniki.  This is a project that I’ve been discussing now for five and a half years with governor Tzitzikostas, with Mayor Boutaris, with David Saltiel and more recently with Mayor Zervas.

We hope very much that when it’s finished, this museum will be able to tell the story of the thriving and vital Jewish community of Thessaloniki, but also the reign of terror that this community suffered under the Nazi occupation, and the tens of thousands of lives that were lost.  We hope very much that this museum will become, also, an educational center that will give young people in Greece the opportunity to learn lessons about diversity, tolerance, and acceptance.

I have seen over and over again through my career, how storytelling has the power not just to keep memories alive, but, also, to educate current and future generations.  In a world where some continue to question the truth of the Holocaust and its victims, it’s more important than ever that we push back on these anti-Semitic narratives.

That’s also why I’m really proud of the agreement that the U.S. Holocaust Memorial has signed with the Greek government, which will enable researchers to examine records of Nazi crimes in Greece between 1940 and 1945.

The United States is also collaborating with the Government of Greece to retrieve and exhibit personal items belonging to Jewish refugees from the 1946 Athina shipwreck which went down off the coast of Astypalaia, and to incorporate those as part of the U.S. Holocaust Museum’s permanent exhibition.

This year, the Embassy is also partnering with the Jewish Museum of Greece to support an innovative educational program on “Women and the Holocaust”.  This program is going to highlight the real stories of five women Holocaust survivors, and will offer workshops and resources to educators and school children throughout Greece.

Partnerships like these promote our shared values of religious freedom and showcase how both our countries stand strongly against hatred and intolerance.

I will finish with the last point, about my boss, U.S. Secretary of State Tony Blinken, who is himself the stepson of a Holocaust survivor.  I am going to close with a quote that he offered on this year’s International Holocaust Remembrance Day.

Secretary Blinken observed that, “As we see rising anti-Semitism and Holocaust distortion and denial around the world, in moments like this, it becomes ever more important that we all remain vigilant against efforts to rewrite history and to protect the facts of the Holocaust.”

I could not agree more.  Today our collective responsibility is as great as it has ever been to raise our voices against hate and oppression, and to make sure that these memories from the Holocaust, are never forgotten.

On behalf of the entire U.S. Mission to Greece, I’m incredibly honored by all the work that we’ve been doing to help contribute to this act of remembrance and bearing witness to all those whose lives were cut short by the Holocaust.  The United States is very proud to stand with Greece in preserving the memory of the Holocaust and working to ensure that our societies are rid of hatred and intolerance.

Efcharisto poli.  And, again, Dr. Saltiel, I very much look forward to hearing your lecture this evening.