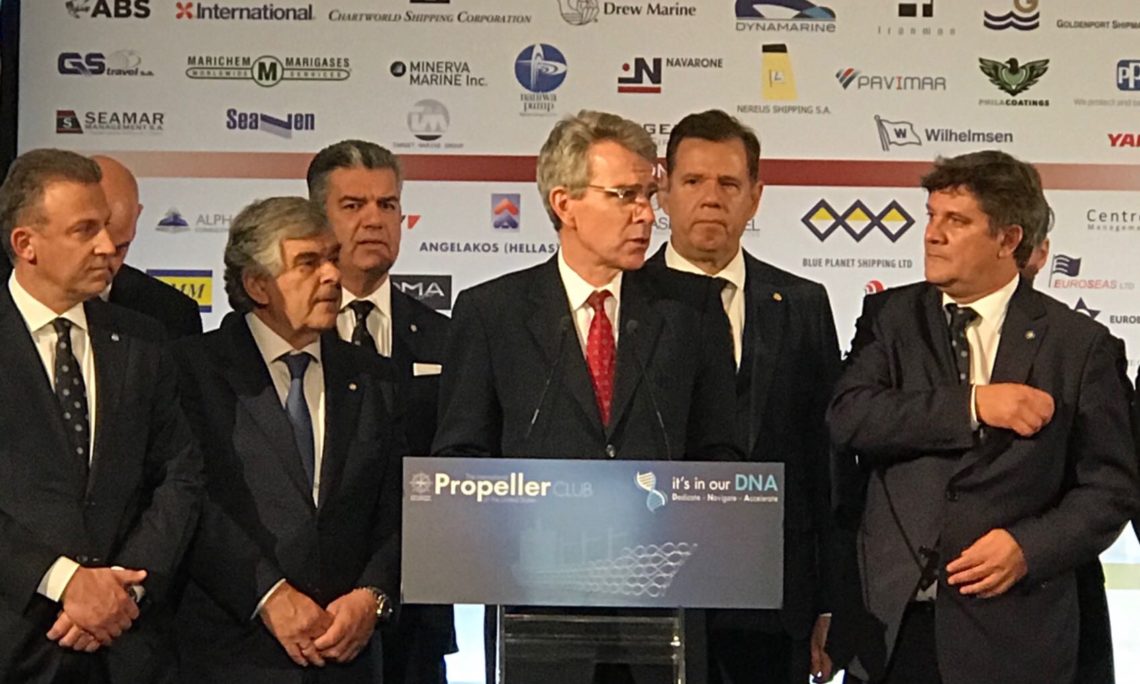 Καλησπέρα, Minister Santorinios, friends, colleagues, thank you for inviting me again to address this year’s Amver awards. After three times, I think I know what we’re in for. And while this is definitely one of the year’s best parties, it’s also a chance to honor a truly amazing program, and to showcase how important the Greek shipping community is to our bilateral relationship.

So I promise to be brief, but I also want to properly honor tonight’s awardees.

Amver has saved thousands of lives at sea, and while it began as an initiative of the U.S. Coast Guard, its implementation has made it a global success. And I want to thank the Propeller Club for helping make that possible.

I also want to congratulate you, George and the whole board, on the launch of the newest Propeller Club in Thessaloniki, which came as we celebrated the strength of the U.S.-Greece bilateral relationship during the Thessaloniki International Fair. The Propeller Club epitomizes the linkages between our two countries and so it was fitting that the Thessaloniki Chapter was inaugurated as part of the celebrations of the U.S. year as Honored Country, which as I said I think will be remembered as a true landmark.

I also want to recognize the Greek shipping community as a whole. Mary and I have really enjoyed getting to know so many of you over the past years, and I recognize your participation in the Amver program is only one facet of Greek shipping’s longstanding and deep ties to America, so thank you for that.

And over the past year, the U.S. Embassy in Greece has made a systematic effort to increase ties with Greece in the maritime sector. In March SUNY and the National Merchant Marine Academy of Hydra signed an agreement for mutually beneficial exchanges between students at the two institutions.

In a meeting with me last week, Minister Kouvelis reaffirmed to me the ministry’s commitment to the program, and supported moving forward with similar initiatives for naval academies and marine schools elsewhere, including places like Chios. I can’t wait to welcome the first students from New York in Greece and to have their Greek counterparts land in the U.S.

We have also reached agreement on the mutual recognition of seamen certificates, and are looking to build on the growing cooperation between the U.S. and Hellenic coast guards with support from Minister Kouvelis and Admiral Raptis — and thank you again Admiral for your support. For instance, we’ve identified areas for US-Greek classroom training and side-by-side joint exercises to increase coast guard interoperability and promote maritime security, and I am very grateful to have Coast Guard Rear Admiral Austin with us tonight to continue deepening that Coast Guard partnership.

This year of course, we celebrated a major U.S. investment in the Syros shipyard, along with ONEX’s formal statements of interest in Elefsina and Skaramangas.

And Minister Kouvelis and I agreed there are many other opportunities for U.S. investors in the Greek shipping industry, ports and shipyards.

So, I’m going to finish here, but I want to ask everybody’s attention for one last minute because I want to take a moment to pay homage to the life of Hellenic Coast Guard Officer Kyriakos Papadopoulos, a true hero who saved thousands of lives and became a symbol of the Greek spirit of philoxenia. Like many of you, and like millions of Americans, I was moved by the film 4.1 Miles, which chronicles his life and work. Having visited Molivos myself, I was riveted by the scenes of human suffering there, but also by the courage and humanity of the Hellenic Coast Guard officers in that film. So please allow me, on behalf of the United States, to offer Mr. Papadopoulos’ family, and his Hellenic Coast Guard colleagues, my deepest condolences on his passing.

So, in his honor, in honor of all those who have saved lives through the Amver program, in honor of our Hellenic Coast Guard partners, and in honor of the Propeller Club’s great contributions to the U.S.-Greece relationship, I raise my glass tonight. Thank you all so very much. Ευχαριστώ πολύ!