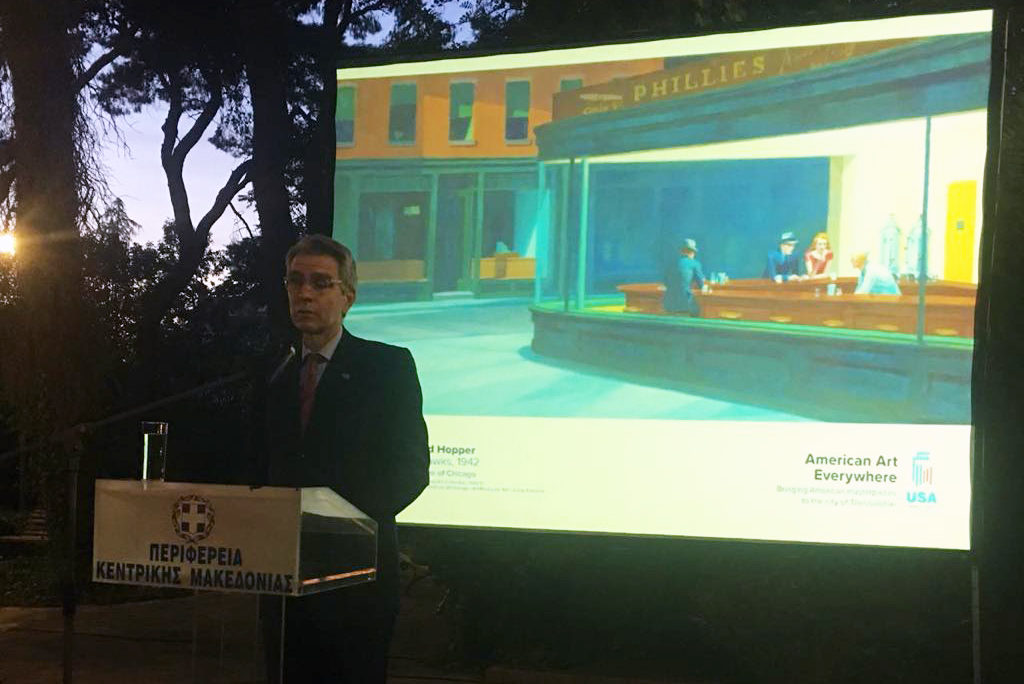 Thank you very much, Governor Tzitzikostas.

That story is true, and I am incredibly proud of what our embassy team, the consulate and our partners at the Hellenic American Chamber of Commerce have accomplished.

This has been an extraordinary weekend, an opportunity to highlight the best of American technology and innovation, but also to put a bright spotlight on the broad dimensions of our relationship.  Our people to people and educational ties, our arts and culture as illustrated by the Art Everywhere project, and our important defense and security ties illustrated by the flagship of the 6th Fleet, the USS Mt. Whitney which looks spectacular in the harbor this evening.

We’ve had literally tens of thousands of people from across Greece come through the American Pavilion.  And we just started.  We’ve had the senior-most level of the Trump administration represented in the form of Secretary of Commerce Wilbur Ross, our Under Secretary Department of Energy Michael Krotsios, the head of the White House Office of Science and Technology Policy, and many other officials from the U.S. State Department, all of whom I know were impressed both by the quality of the American Pavilion, the fantastic work that [Semos] and Alex and [Elius] and all of our partners at the Hellenic American Chamber have done, but also by the fantastic support which we have enjoyed from the regional government, the government of Macedonia.  Thank you very much, Governor.  And also the Thessaloniki municipality.

I am, as the Governor referred to, especially proud of the fact that we are sharing America this week not just with the tens of thousands of visitors to the fair, but with all of the people of Thessaloniki.  From the airport to the promenade to this regional government building, we are thrilled to be able to share some iconic works of American art with all of the citizens of this beautiful city.

These American art work span time and artistic styles and their exhibition here is an opportunity to celebrate the breadth and the depth of the U.S.-Greece relationship which includes importantly, the cultural ties between our two countries that this exhibition is meant to celebrate.

I could not but be impressed when I arrived at the airport on Thursday night and saw Gilbert Stewart’s portrait of George Washington.  And everywhere I’ve been going in this city I’ve been seeing American art over the past four days.

Seeing such a fantastically diverse collection from Edward Hopper to Roy Lichtenstein to Fred Hassebrock to Miki Hayakawa was a great way to lead up to tonight’s event.

So Governor, I want to thank you and the region of central Macedonia and also Mayor Boutaris and the municipality of Thessaloniki for all of their fantastic support.

We look forward to collaborating.  We’re got six more days to go, Simos.  I know we’re going to make it.  But I also want to thank our partners at HELEXPO who have done such a fantastic job of making this, as the Governor said, a TIF that will be remembered as a landmark of the U.S.-Greece relationship and our work as allies.

It’s not everyday that you get to see a Lichtenstein zooming past you on a bus in Thessaloniki, and I know I’m going to enjoy every moment of it.

So thank you very much for being with us this evening.  We’ve got lots more to share.