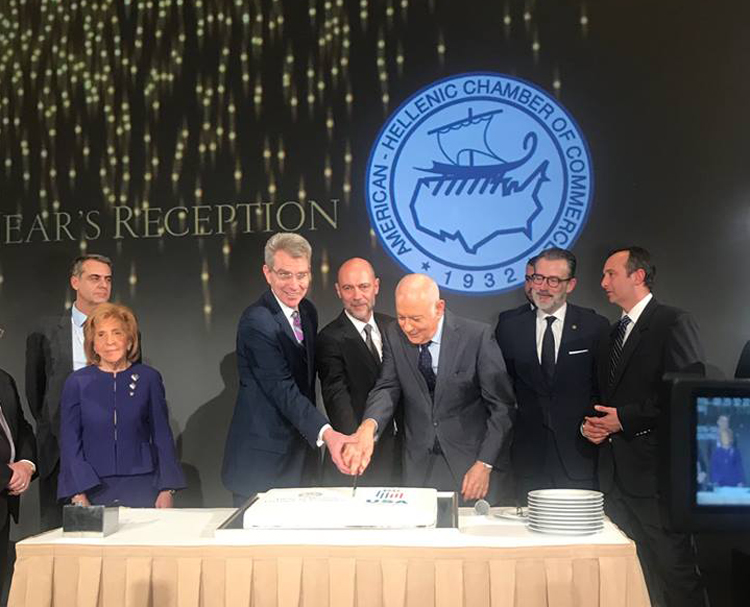 Welcome everyone, καλή χρονιά!  Happy New Year! It is great to be here to celebrate with you all, and I really congratulate Simos and our AmCham colleagues for another great new year’s party.

I promise to be brief to let everyone enjoy the occasion, but I would like to take this opportunity to deliver some of the remarks I had intended for Thessaloniki last Monday when we had our government shutdown.  I also want to thank AmCham for putting on a great event and for so graciously speaking about the importance of our joint efforts to promote the United States as the honored country at this year’s Thessaloniki International Fair to U.S.-Greece relations.

I particularly want to acknowledge the presence here this evening of Minister Papadimitriou, who has been such a strong advocate of our trade and investment relationship, and now chairs, with Secretary Ross, the joint committee we have established to grow further that economic partnership.  Aside from our travel together with the Prime Minister last October to Washington, the Minister and I also joined each other last June in New York and Washington for Select USA, and then in December for Capital Link.  In all these venues we worked together to get the word out on opportunities to building our commercial ties.  I look forward to repeating this double bill agenda in June when I will join our partners at AmCham and Athens Exchange for another US roadshow.

Thanks also in absentia to Minister of Digital Policy Pappas.  He is traveling to the U.S. this week with Jonathan Cohen, our Deputy Assistant Secretary for Southeastern Europe.  They’ll be meeting with companies in the high-tech and entertainment sectors, from Hollywood and Silicon Valley to the MIT corridor, in New York, and in Washington, D.C.  They’ll be presenting the opportunities emerging now in Greece as a result of reforms and administrative changes already implemented and ones that are ongoing, as Greece emerges from the 3rd bailout.

So, I’m glad to have another chance here tonight to express my enthusiasm for what will be a historic year for the U.S.-Greece bilateral relationship on so many levels —  economic, security, political and cultural.

2018 is America’s year in Greece, and in northern Greece in particular.  We are confident this will be the year Greece fully recovers from nearly a decade of economic crisis. Last October, President Trump and Prime Minister Tsipras set this positive tone by agreeing on the importance to our relationship of the U.S. status as honored country in the 83rd Thessaloniki International Fair in September, where we are expecting up to 300,000 visitors from across the region, including a high-level U.S. delegation.

As President Trump said, it will be a prime opportunity “to showcase American technology, enterprise, and innovation on the world stage.”

It gives me great pleasure to announce tonight some of the important activities we have planned that are connected to TIF this year.  First, a huge thank you to the TIF-HelExpo Management Team and AmCham for all the help in coordination.  Kudos to AmCham’s web team, Ox Design and Alex’s company Foresight, for creating a great website, usatif2018.gr, where you’ll find the most up-to-date information on U.S. participation and USATIF2018 is also very active on Twitter and Facebook.

Last Friday, we signed an agreement between the U.S. Broadcasting Board of Governors, Voice of America and the Athens News Agency for content sharing and special tributes and highlights throughout the year on TIF and on American culture in general.  VOA broadcasts in over 60 languages, including Balkan and wider regional languages, so our TIF message and Greece’s message of economic recovery is sure to get wider circulation.

I’ll just talk a bit now about investments and economic recovery, as I have every reason to expect more U.S. investment in Greece this year.  Whether it’s interest in power sector privatizations, or interest in the Alexandroupoli port, in civil aviation, or in shipyards, big American investors and companies are out there looking for ways to partner with Greek companies and take advantage of the value proposition that Greece represents.  We’ve seen big investments this past year from Calamos, Morgan Stanley and Avis, just to name a few, and we’re hoping to see ONEX investment in the Neorion Shipyards and American involvement in the Ellinikon project, Alexandroupolis port, and many other deals this year.

As I keep saying, the challenge for 2018 will be to see that these renewed expressions of investment interest are followed through and don’t wither on the vine.  Foreign investors, especially from the U.S., are looking for certainty, and moving ahead on the progress we’ve already seen on several key privatization projects, stability in the tax and regulatory regime, could all help attract new foreign capital at a moment when Greece is poised to move forward.

But to bring it back to the focus of tonight: TIF, and the theme of the American Pavilion: Harnessing Innovation, I want to express our full support for Greece’s young entrepreneurs and startup ecosystem.  Greece’s future economic success depends, in large part, on its resilient and talented human capital and on the quality of innovation, which is another important value that our two countries share.

So I want to thank everyone here, the AmCham, TIF-HelExpo, business and local leaders, entrepreneurs and friends, for your support in making 2018 a watershed year in our bilateral relationship.  And I wish you all a very prosperous and productive 2018, beginning tonight with the Vasilopita cutting. Χρόνια πολλά.