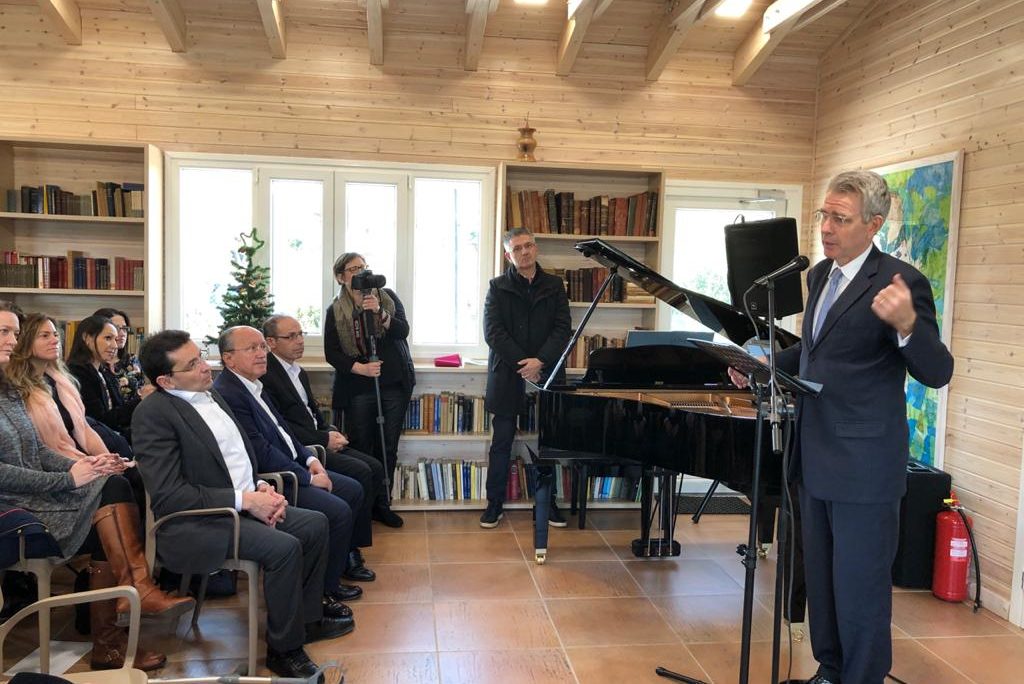 Thank you very much, Stella. Let me start, first of all, by acknowledging Mayor of Rafina and Pikermi Evangelos  Bournous, Mayor of Marathon Stergios Tsirkas, Deputy Governor of Attica Nikolaos Peppas, my friend, Member of Parliament, fellow cyclist Spyros Pnevmatikos.

I want to say, really, how inspiring it is to be here today and to hear how much the community has done to rebuild itself after the tragedy of the Mati fires. I know this neighborhood pretty well. I’m a regular cyclist. One of my routes is down Marathonas out to Schinias and up. As Spyros knows, when you’re doing that ride, the first place your heart really starts to beat is when you do the climb from the Rafina junction up to the top of the hill here.

I will always remember that night in July of 2018 when the fires happened. I grew up in Southern California, so I grew up very familiar with the problem of wildfires, and in San Diego, my hometown, just like in Greece, because of climate change, and because of how weather is becoming more extreme, we’re seeing exactly the same problem, where fires that in the past would have been allowed to burn themselves out now become devastating disasters. And I think our governments and our societies are still working through how you manage this problem.

I remember Mary and I were at home that night. I remember the wind howling outside of our house in Ambelokipi, and I remember seeing on Twitter just before I went to bed, there were some pictures of the flames at the top of the hill here about to go over towards the monastery and then down to the port of Rafina. And I remember thinking, “Oh my goodness.”

I was very proud of the way in which the U.S. government responded afterwards. That morning, I was on the telephone with the Defense Minister, with Admiral Apostolakis. We mobilized European Command, our military, instantly. By that afternoon, the next day, our surveillance aircraft were doing orbits over the Attica region to support the Hellenic Armed Forces in helping to monitor the flashbacks of the fires that were happening across the region, both to the west and to the south of the city.

I’m very proud of the fact that during the disaster itself, the Hellenic Armed Forces and the Navy and the Special Armed Forces, in particular, played a critical role. What people may not know is that the work that was done by the Chinook pilots and the Coast Guard MYA units that deployed with their boats, their RIBs out of the Chinooks, that was specific training that the U.S. military had provided just a couple of months beforehand. It was training that was provided in conjunction with the delivery of the Chinooks that are now operated by the Hellenic Armed Forces, but it was put to good use, and I’m quite certain that there are lives that were saved, the people who were pulled from the water off of Rafina on that terrible evening, as a result of that training.

After the fires, our community responded immediately with some immediate donations, but to their great credit, the Embassy’s Community Service Network also got involved and said, “How can we help on a more sustained basis?” And I want to emphasize, what we’re presenting today is not something from the U.S. Government. It’s from the employees of the American Embassy, the Greeks and Americans, as individuals, responding to a situation that clearly cried out for all of us to offer our very best. And as Stella described, we’re very grateful for the leadership that Katerina provides of our Community Service Network, and the work that Daisy did with the community here in terms of identifying a specific requirement. The work that our Community Service Network does is out of the public eye. This is the first one of these kind of events I’ve ever done. But it reflects a very typically American instinct to charity and to good works, and I’m very proud of how our Embassy community as a whole responded to the tragedy at Mati, and as I said, as a Southern Californian, it’s something that really struck very close to home to me.

It took me a couple of months after the fires before I decided to do this ride again, and I remember the first time I came through here, my emotional reaction at the time, first of all the huge pile of rubble that was across the road here for the better part of a year, but also seeing the scope of the devastation, I mean reading the news accounts, watching the television—it doesn’t prepare you until you realize, you know on a bicycle, it’s about twenty minutes of riding where you’re seeing nothing but destroyed communities and burned-out homes and blackened trees, and I think it made a very strong impression.

I think it’s fantastic to see how the community has come back, and I think it says something very powerful about the Greek character that the communities of Marathon and Rafina have been so resilient and have been so determined to rebuild their lives and to ensure that this kind of disaster does not recur. For our part, I look forward to our continuing to be engaged here. Daisy has a beautiful summer house down in Marathonas which Mary and I were able to visit during the summer, so I know she’ll remain here. Another one of our senior local colleagues, George Bonanos, actually lost his boat during the disaster. It was used by somebody to get away, and I don’t think George ever found it or ever heard anything about what happened to that. But we will remain engaged. I also want to acknowledge Lisa and our medical team who have offered to work with the Athletic Center here to provide some trainings on the use of the defibrillator equipment and CPR techniques generally so that hopefully it will never be needed, but if it is, so that people are able to respond appropriately.

So, let me say, first of all, thank you to our Community Service Network and my Embassy colleagues.  Also, thank you to all the citizens of Mati, of Rafina, of Marathonas for letting us share a small bit of ourselves with your task of reconstruction and rebuilding. And let me assure you that we are with you, and we appreciate so very much the hard work that you have engaged in in the year and a half since that terrible day in July 2018. Thank you very much. Ευχαριστώ πολύ.