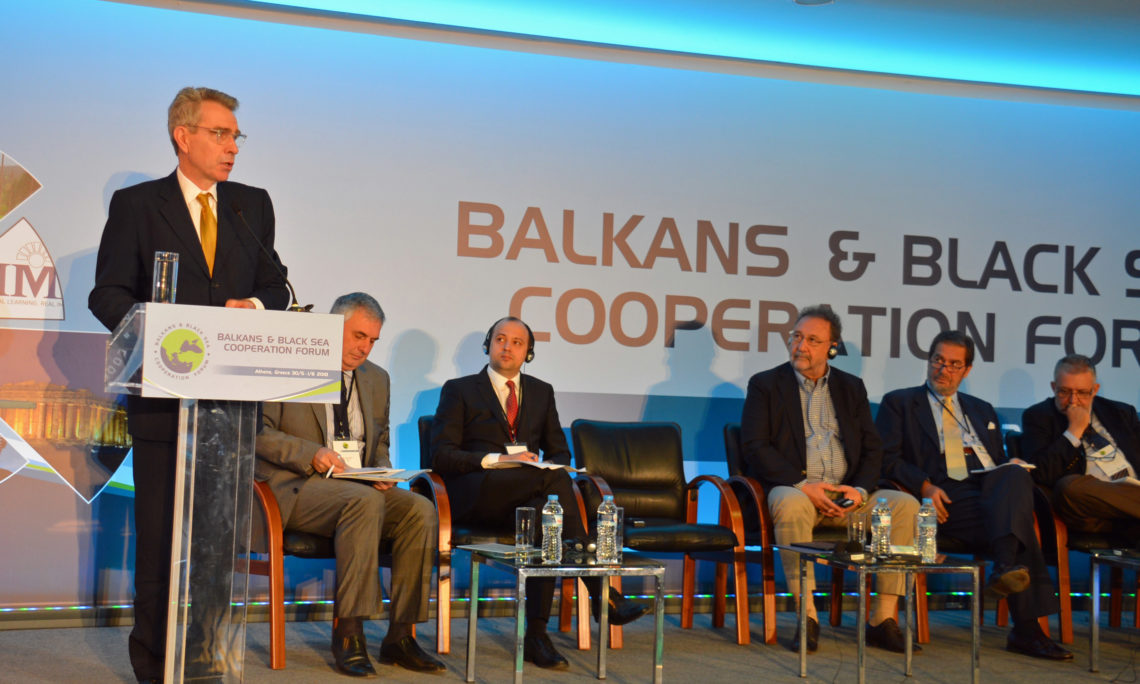 “Rail, Road, Rivers Connectivity to the EU via Balkan Region”

Καλημέρα. I’d like to start by thanking Yannis and GeoRoutes Greece for organizing this forum, having spent the past five years as US Ambassador to countries in the Black Sea region, the themes on the table today have a very special resonance for me. Thank you also, Ivailo, for moderating the present discussion. Bulgaria has played a particularly effective role in its time at the helm of the EU Council Presidency. And I’ve worked closely with my colleague in Sofia, Ambassador Eric Rubin, to underline US support for projects like the IGB interconnector that strengthen the Greece-Bulgaria corridor.

The issues we’re talking about today have been a part of the wider regional discussion for a very long time. Last Friday morning I was in Santorini and I had the opportunity to visit Akrotiri which is a reminder of the impact the role Greece has played as a fulcrum of regional economic cooperation long before there were conferences that were talking about it.

4000 years ago the inhabitants of Santorini were already trading with their neighbors in present-day Egypt and Cyprus. As they traded food and wares, they also exchanged cultures – laying the groundwork for the regional interconnections that persists today.

By capitalizing on its geography and history, Greece has forged relationships and left cultural impacts in a region that stretches from North Africa to Bessarabia and Ukrainian Crimea. A few weeks ago, Greece used its convening power as a regional leader to bring together the Visegrad countries and Western Balkan neighbors at Sounion. There, from ancient times to today, Poseidon, the Greek god of the sea, has watched out over a trade route that connects mainland Greece with Crete and its Mediterranean neighbors.

In some ways not much has changed since ancient times, Greece remains a commercial and cultural crossroads. The strong trilateral alliances being forged between Greece, Cyprus and Egypt or Greece, Cyprus and Israel, have been in existence for millennia. Beyond these Mediterranean ties, which the United States strongly supports, Greece and the United States share strongly a vision of deeper integration of the Western Balkans into European and Euro Atlantic Institutions. And in this regard, we welcome and strongly support recent progress to Macedonia name issue, which holds the key to unlocking deeper economic and political ties between Greece and the Western Balkans as Minister Pitsiorlas described so eloquently.

Greece is both historical entrepot and a modern pillar of stability in this region. The U.S. has long recognized this and our commitment to building our partnership with Greece in this regard remains unchanged, as Secretary of State Pompeo reiterated in his meeting last week in Washington with Foreign Minister Kotzias. In that meeting, our two governments agreed to establish a high-level strategic dialogue that will further enhance our cooperation on the full range of bilateral issues, including what we at the Embassy call ‘our neighborhood dialogue’.

In the security realm, we continue to strengthen and deepen ties between Greece and United States. We recently, for instance, hosted the USS Harry Truman Strike Group, with 4 ships in 4 ports across Greece: Souda Bay, Rhodes, Santorini, and Piraeus; and separately a visit by the USS New York to Corfu. These ship visits are a reflection of the deepening defense relationship between our two countries, and manifest our shared commitment to maintaining stability in the wider region.

While I was in Santorini, I had a productive discussion with South Aegean Regional Governor George Hatzimarkos aboard the USS Normandy. Governor Hatzimarkos understands the significance of our defense relationship and joint efforts to maintain security and stability in the Aegean to ensure that Greece remains a safe and secure environment for investment and the vital tourism industry, and in this regard there is a clear link between the geopolitics and the geo-economics.

On the subject of infrastructure, Greece’s ports and shipyards are critical to these efforts to build connectivity. I’ve been glad to see that work has restarted at the strategically located Neorion shipyard on Syros, where the U.S. company ONEX is now finalizing its investment. This investment is a clear demonstration how U.S. companies, together with Greek partners and talented Greek human capital are able to build economic opportunities.

There is also strong interest from the American companies in the privatization of the port of Alexandroupoli, which I was able to discuss with the port manager this morning. Aside from its untapped commercial potential, Alexandroupoli is a strategically significant piece of infrastructure. Last year for instance, the U.S. Army’s 10th Combat Air Brigade utilized this port as a staging area for helicopters and cargo returning back to the U.S. from Romania. Since then we’ve had several military delegations visit Alexandroupoli to discuss ways in which we can best leverage its infrastructure for wider regional and alliance efforts.

Alexandropoulis is also an example of how Greece is emerging as a crossroads for energy security, including the important FSRU project. The U.S. and the EU share a vision of Greece as a regional energy hub. We view Greece’s role in securing a diversity of energy sources as critical to achieving a strong and free continent.
Greece is a platform for a large number of energy projects that will strengthen Europe’s energy security, projects like TAP, the IGB interconnector, Revithoussa, and the Alexandroupoli FSRU to name a few. The United States has a strong national interest in these developments, including the recent privatization of DESFA and the future privatization of DEPA. We also hope to see new US investors further develop Hellenic Petroleum, which plays a central role in Greece’s energy sector.

Our shared interest in Europe’s energy security is the why we oppose development of the Nordstream II or a second line of the Turkish stream. Nord Stream II would concentrate two-thirds of Russian gas imports to the EU through a single route, creating a choke point that would significantly increase Europe’s vulnerability to a supply disruption.

Greece’s role in as a regional leader is also one of the reasons why I’ve spent so much time and energy promoting this year’s Thessaloniki International Fair, where the U.S. will be the honored country. TIF will provide a compelling platform to highlight Thessaloniki and northern Greece’s strategic role in creating the linkages to the Balkan countries. We’re working closely with our Greek partners to bring together regional political leaders in Thessaloniki to meet with our Secretary of Commerce Wilbur Ross, and other members of the delegation.

As I conclude, I want to bring this into the greater context of our long-standing and strategic support for Greek economic recovery. All of the US initiatives I talked about today are predicated on the return to stability and prosperity for Greece. Our shared efforts in expanding regional linkages, whether through improvements to Greece’s road network, development of throughput capacity in Greece’s ports, or bringing together businesses and people to take advantages of these opportunities to foster growth, prosperity, and development not just in Greece but throughout the wider region.

Thank you very much, and I look forward to hearing from my fellow panelists and to the discussion that follows.