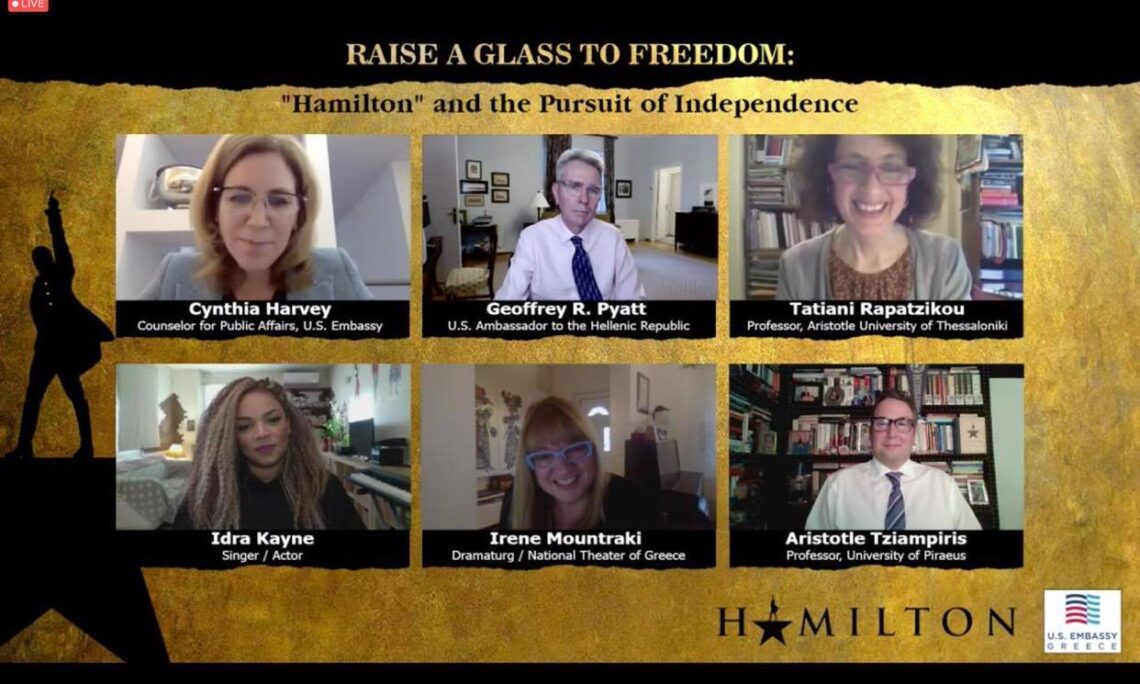 Thanks Cindy, and again,καλησπέρα to everybody. I want to say how thrilled I am that we’re able to host this conversation this afternoon, and of course, huge thanks to our really distinguished panelists for joining this discussion. I should also say thank you to Disney and all of our colleagues at the Bureau of Educational and Cultural Affairs for arranging this special screening.

The timing couldn’t be better, of course. It comes right in the middle of our national election process in the United States and is a reminder of the fact that for all of our hundreds of years of experience with our democracy, it is still very much a work in progress, and rests on the human values and the norms that go back to the stories that are told so well in the Hamilton musical. So the timing is perfect. Of course, Broadway musicals are one of America’s few original art forms, so this is a really special opportunity for us to hear from some distinguished artists from across Greece, their reflections from what they saw and heard in the musical.

It’s especially nice to be doing this here in Athens, of course, because so many of the ideas that inspired our founders in terms of rule of law, the importance of an informed citizenry, democracy itself, all found their inspiration in classical Athens. All of our founders were well educated in the history of Athenian democracy, and it was very much an explicit inspiration as they worked through the hows and the whys of our young democracy. And of course, this found an echo 40 years later in the Greek independence movement, and I’ll probably come back to that in my concluding remarks.

One of the things that I really appreciated about the film, aside from the fact that it does a fantastic job of capturing the live Broadway experience on these screens that we’ve all spent so much time with over the past few months, is the way in which it really lifts up the idea that the American project, American democracy, is something which is constantly being improved. It rests on the resolve of our citizens, all to build a better and more just future, and I think it’s quite important that the cast is composed largely of minorities, which sends an important message about the diversity that is one of America’s greatest strengths.  And of course Alexander Hamilton himself was an immigrant to America, whose immigrant experience finds its echo even today with the hundreds and thousands of successful Greek Americans in the United States.

The other thing that makes this an interesting story to be listening to here in Greece, of course, is that the Hamilton musical tells the story of the creation of the American federal system. The Federalist Papers, which I know Ari has probably read and memorized, which laid out the great debate that our founders had over the relationship between the states, which is the same debate, of course, that the sovereign states of the European Union have been engaged with as the EU, another work in progress, has shaped its response to the global pandemic, to a series of financial crises. Greeks, of course, are deeply familiar with the issues of national and supranational fiscal policy that animated Alexander Hamilton’s tenure as Secretary of the Treasury. And now of course, we’re all familiar with the phrase, “Europe’s Hamiltonian moment” as the European monetary union made some really important decisions in terms of moving ahead with a common debt instrument.

Hamilton is a reminder that history matters, and as an amateur historian myself, I appreciated that. But what I really appreciated is that Hamilton is just a wonderful story, fantastic music, the way in which it blends Broadway traditions with hip hop, and I’m sure all of the panelists and experts will do a much better job than I could ever do in highlighting that. So what I think I will now do is pass the microphone to Professor Rapatzikou, who will take it from here. And again, thanks to everybody for joining us this afternoon.