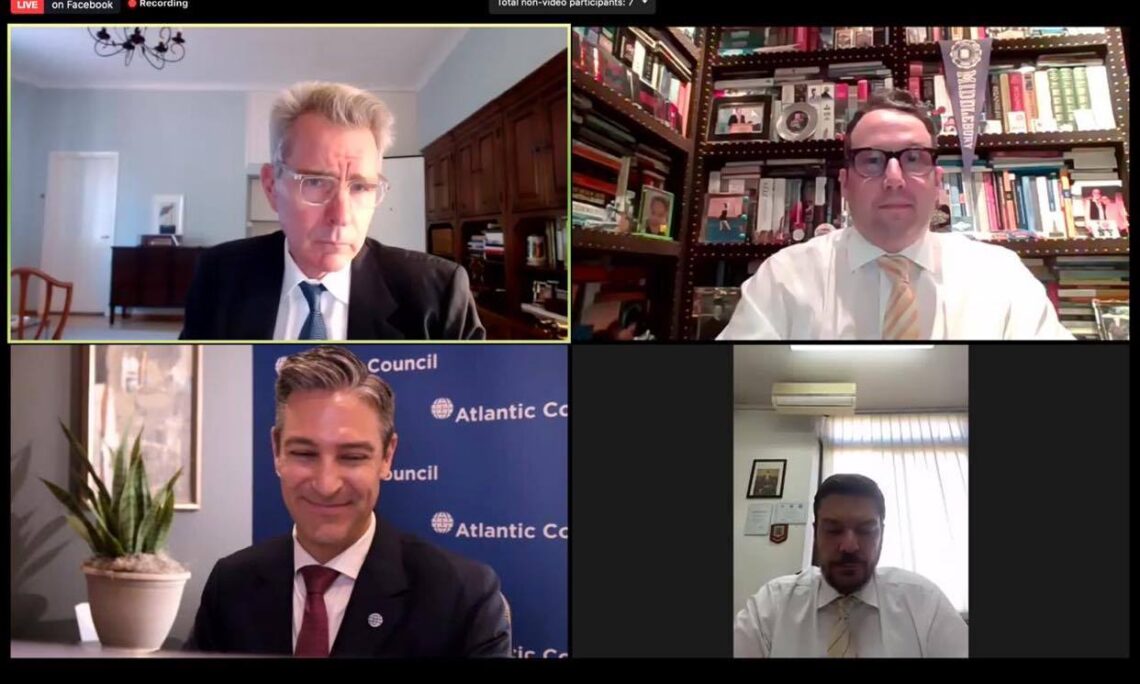 Καλησπέρα.  Thanks Ari, thanks to you and Spyrus I’m really glad we’re able to do this today.  I also want to say what a pleasure it is to be joined by Damon Wilson and our friends at the Atlantic Council.  The last time Damon and I were together was at the beginning of January when Prime Minister Mitsotakis was in Washington for a fantastically successful visit.  I think everybody who heard him speak at the Atlantic Council that morning in January understands why we are so enthusiastic about the prospects for further deepening an already very important strategic relationship between Greece and the United States.  I think the only thing we got wrong on that January morning is, I don’t think anybody mentioned the Coronavirus, which is just a reminder of how fast our world has changed over the past few months.

What I will say by way of introduction is first of all how proud I am of the way that the United States and Greece have worked together through this unprecedented crisis.  Right off the bat, our technology companies stepped forward, companies like Cisco, Google, Microsoft, stepped into the breach to support the Greek government as it tried to figure out how to respond using technology to, for instance, keep schools online, accelerate the Greek government’s digital transformation, build a data dashboard that has been key to the government’s data-driven response to the pandemic.  For somebody who’s lived in Greece now for four years and got accustomed to many Europeans talking about Greece as a poor performer and a little bit of a black sheep, it’s been really encouraging and inspiring to see the way Greece has managed this crisis, relying on the advice of the scientists, relying on the solidarity of Greek society to do the right things during the most difficult phase of the crisis, the ways in which those reputational gains that Greece has acquired, I think, are starting now to provide benefits in the context of the government’s number one challenge today with the health emergency for now resolved, a real focus on how to see that Greece returns quickly to growth.

I’m also very proud of the partnership that I had with Health Minister Kikilias as we worked through this crisis phase, ensuring for instance that the U.S. medical technology was made available to Greece.  It was notable that Greece is one of the countries where Gilead Sciences chose to conduct the clinical trials for the application of Remdesivir as one of the Coronavirus treatments, and it was really inspiring to me when I was in Thessaloniki last week to visit the AHEPA hospital, which was one of the main treatment centers for the disease here in Greece, and to hear how the lead scientists and doctors there worked over the Greek Easter holiday to ensure that the data that Greece provided on their results with Remdesivir were fed in as quickly as possible to Gilead’s global effort and a reminder that there are thousands of laboratories and scientists across the United States who are working every single day to find a cure to this disease.

I also want to note as we think about what this means and what the strategic conversation, Ari, that I know you’ll want to have, that in some ways, the Coronavirus pandemic has reminded us of why we have focused so systematically on the challenge of great power competition here in the Eastern Mediterranean.  There are issues that will be dealt with for the months to come in terms of how China and the lack of transparency in the PRC system contributed to a global crisis that has exacted a tremendous both economic but also human cost.  I’ve heard lots of questions here in Greece about what the COVID experience means for global supply chains, how we all became too dependent in some sectors on supplies from China, and then also the role that Russia has played and the same problems of misinformation and malign behavior that we saw for instance around the Prespes Agreement with North Macedonia or we’ve seen around the Greek Orthodox Church, we’ve seen also, as Assistant Secretary Reeker has pointed out, in some of the misinformation that’s come out of Russia and Russian entities regarding the pandemic.

So I’m very proud of where we are with the U.S.-Greece relationship today.  The relationship as a whole is better than it’s ever been, we’re working together every single day to strengthen our defense and security ties, to work on regional problems, including our collective interest in seeing that all the countries of the western Balkans continue to move towards Euro-Atlantic institutions.  The people-to-people relationship just goes from strength to strength. We continue to work on that, and I was glad today to meet with Minister of Education Kerameus.  And we’re going to keep working on these health dimensions as well.  As I’m reminded every day, we’ve got a lot of Greek Americans and Greeks working in laboratories and hospitals in the United States, and our systems are very much latched up as we deal with this global crisis.  So, as Damon likes to say, we’re in this together, and certainly speaking for the United States, and I think I can also speak for Prime Minister Mitsotakis and his whole cabinet, we are strongly committed to leveraging this relationship to advance our shared interests and shared security.  So look forward to the conversation today and again, Damon, thanks for doing this.