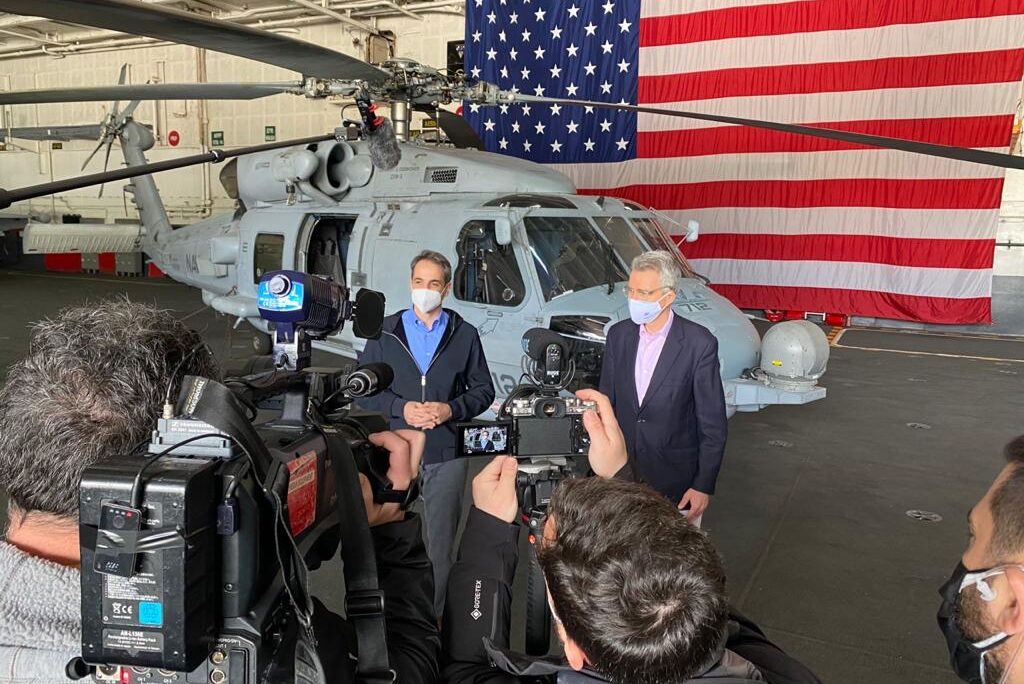 The United States and Greece:  The Sky’s the Limit for What We Can Accomplish Together

Earlier this week, I had the great privilege to join Prime Minister Mitsotakis, leaders of the Hellenic Armed Forces, Commander of U.S. Air Forces in Europe and Africa General Harrigian, and hundreds of officers and airmen from eight allies and partners in Andravida for INIOCHOS 2021. This was my fourth INIOCHOS, and it was impressive to see how the exercise has grown in size and complexity over that time — a testament to Greece’s growing leadership role in the region and its power to build bridges between our NATO Allies and key regional partners like Israel, UAE, and Cyprus.

Our cooperation at INIOCHOS is one of many examples of how ties   between the United States and Greece have flourished in recent years.  Today, our defense relationship is one of our strongest in Europe.  We invest in this relationship because a more secure Greece is also in America’s interest. It’s good for the region.  It’s good for NATO.  Our shared interests span a broad and strategically important domain stretching across the Mediterranean, up through the Balkans, and to the Persian Gulf and beyond.

That’s why we have been so supportive of the investments Greece is making to modernize its forces after a decade of economic crisis.  A perfect example of this is the Viper upgrade program for 84 of Greece’s F-16s.  While in Andravida, I had the once-in-a-lifetime opportunity to fly with one of our pilots in an American F-16, and to see that aircraft’s avionics and communication package, much of which will be part of Greece’s F-16 Viper upgrade.  I also had a chance to see first-hand how American pilots communicate and work with their Hellenic Air Force counterparts, using NATO standards and procedures, a demonstration of the interoperability that is the essence of our alliance.

Even beyond the Viper upgrade, Greece is showing  a significant commitment to upgrade its capabilities.  Greece’s purchase of the world’s leading anti-submarine warfare helicopter, the MH-60 Romeo, will pair well with Greece’s renovated P-3B Orion planes, giving Greece an unmatched maritime domain awareness capability.  Greece’s smart use of U.S. excess defense articles such as 70 Kiowa OH-58 Warrior helicopters, 10 CH-47 Chinook helicopters, Special Operations boats, and jet engines will dramatically increase Greece’s capabilities at a reasonable cost.  The U.S. Government also recently approved the allocation of 1,200 M1117 armored security vehicles for the Hellenic Army.  And in the future, we expect to welcome Greece to the F-35 program, which builds naturally on the Viper F-16 upgrade.

And make no mistake, the U.S. government is strongly committed to our bid for the Hellenic Navy’s Frigate Modernization Program, which represents a generational opportunity to expand our naval partnership.

As we flew over the Gulf of Navarino in the F-16, I explained to my pilot the decisive naval battle that took place there two centuries ago and the shared values and friendship that have united our countries ever since.  And perhaps nowhere are these shared values and the confidence we have in each other on greater display than in our numerous joint military exercises.  I’ll soon return toAlexandroupoli for DEFENDER-Europe 21.  This large-scale U.S. Army-led exercise, consisting of more than 28,000 multinational forces from 26 nations, will utilize key ground and maritime routes bridging Europe, Asia, and Africa, showcasing once again Greece’s key position at the nexus of these continents as well as the strategic value of Alexandroupoli.

This progress is anchored in our updated Mutual Defense Cooperation Agreement (MDCA), which sends a clear signal to any would-be adversaries that Greece and the United States stand firmly together.  Thanks to the MDCA upgrade, we’ve been able to home port the USS Herschel “Woody” Williams expeditionary platform at Souda Bay.  We’ve expanded the use of the civilian port of Alexandroupoli, which offers tremendous benefits as an alternative route to transfer equipment and personnel into southeastern Europe and the Black Sea region.  We’ve already made infrastructure investments in Stefanovikeio and have plans to do so at Larissa Air Base and the Souda Bay Marathi Pier Complex in the coming months.

The United States and Greece are poised to do so much more together.  That is why both our governments, at the highest level, are committed to extending the duration and reach of the MDCA.  Our security relationship is not just about hardware.  It is about a commitment to a long-term partnership, based on shared strategic interests and values that have united our countries now for 200 years.  When the United States and Greece work together, the sky is the limit for what we can accomplish and both the region and the wider international community are safer and more secure as a result.