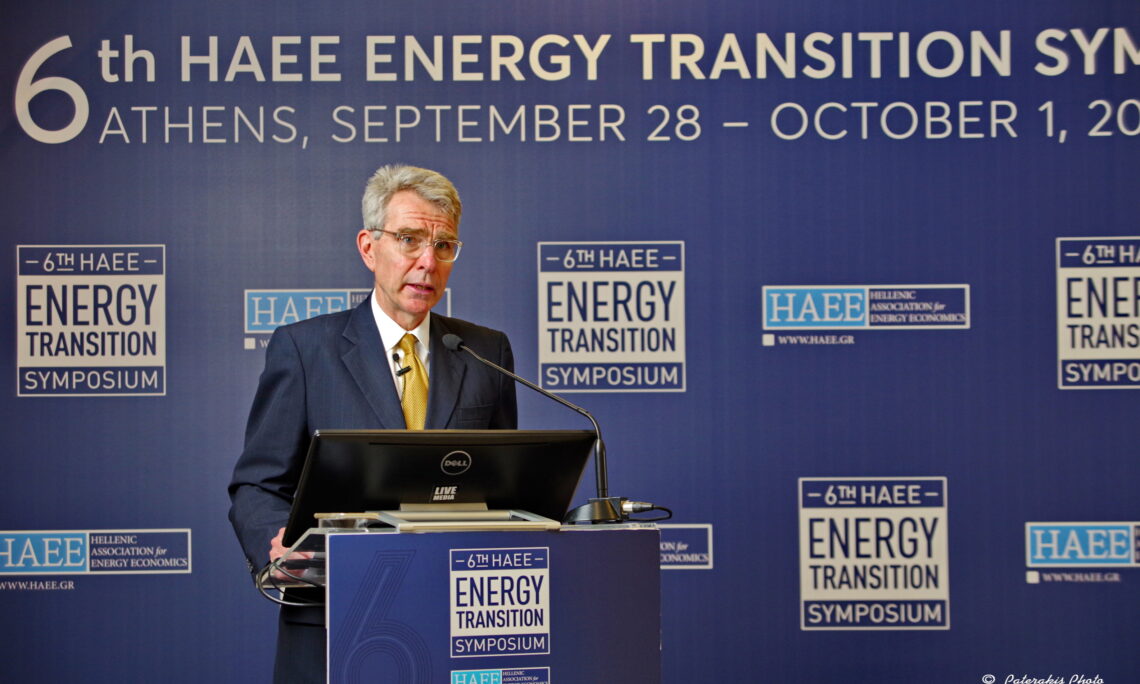 Thank you very much Nikos.  Secretary General Sdoukou, thank you for joining today.  It’s a real honor to be addressing you, and my fellow panelists, colleagues, and friends.  And I want to say a special thank you to the Hellenic Association for Energy Economics for inviting me back.  I think this is my fifth symposium, so I’ll try to say something new, but I also very much appreciate the platform that you provide to address some of these very important issues.

The theme of this year’s event, “looking ahead with optimism,” is really a perfect description of how I view the changing energy landscape in Greece and the Eastern Mediterranean.  Energy cooperation continues to be one of the real bright spots in the U.S.-Greece relationship.  Just looking at the past year, we can easily point to progress on several major energy projects, like TAP, the IGB, and the Alexandroupoli FSRU.  We are also seeing increasing U.S. investments in Greece in renewable energy, battery storage, and e-mobility.  These are all long-term strategic investments whose benefits haven’t changed because of COVID-19.

And as we continue to develop our robust energy policy relationship, we also need to factor in the climate crisis, something that all of us who lived through the past summer in Athens, the terrible fires outside the city, in Evia, in Ancient Olympia, need no convincing of.  The Biden-Harris administration has placed the climate challenge and clean energy transition at the forefront of U.S. international energy policy.  President Biden, my boss Secretary of State Blinken, the President’s Climate Envoy, my former boss Secretary John Kerry, and Secretary of Energy Granholm have made clear that climate change is the challenge of our age.  It is also an opportunity to make historic advancements in global prosperity and the quality of life.

As we emphasized at the Department of Energy’s Partnership for Transatlantic Energy and Climate Cooperation Summit in Warsaw last week, we are setting new goals for bold, but achievable, leaps in next-generation technologies, including hydrogen, carbon capture, industrial fuels, and energy storage.  The United States is working with our partners around the world, and especially this transatlantic community, to raise our collective ambitions, create jobs for millions of people, and protect the planet.

Last week in Warsaw, Minister Skrekas had the first of many upcoming Cabinet-level meetings between the Biden-Harris Administration and the Mitsotakis government, where Secretary Granholm underscored Greece’s critical role as an energy partner for the United States.  In particular, Prime Minister Mitsotakis’s decision to retire all lignite power plants by 2028, if not 2025, and his plan to target a significant portion of Greece’s 32 billion EU recovery funds towards clean energy, as Secretary General Sdoukou discussed, demonstrates Greece’s clear leadership in this area.

Natural gas has also enabled Greece and its neighbors to reduce their emissions and accelerate the retirement of lignite power.  When completed, the new Mytilineos natural gas-fired power station in Aghios Nikolaos will be one of the largest and most efficient in Europe, featuring cutting edge GE gas turbines that will significantly reduce greenhouse gas emissions compared with lignite power plants.  These high-efficiency GE gas turbines will also be the heart of the planned Alexandroupoli natural gas power plant that will be co-owned by North Macedonia.

As countries around this region transition to cleaner energy sources, Greece is also positioned to be among Europe’s major generators of wind and solar power.  I know Minister Skrekas, Secretary General Sdoukou, and their teams are hard at work on additional renewable energy sector reforms, as well as frameworks for critical areas like offshore wind and energy storage.  These are technologies where U.S. companies lead, and the Embassy is committed to facilitating U.S. investment.  I’m proud that the American footprint in Greece’s green energy sector is growing, with companies like 547 Energy, Fortress Investment Group, Ameresco, Invenergy, and Jasper Energy bringing U.S. investment funds and U.S. technologies to the Greek market.

Growth in the green energy sector benefits both of our countries.  For example, there’s a Greek American company Advent, headquartered in Boston with offices in Patras.  It’s researching the next generation of fuel cell technologies.  It has been a real privilege during my time here in Greece to watch Advent expand from a scrappy startup to being a NASDAQ-listed, growing player in the international energy technology space.  I was also glad to meet last summer with the CEO of Sunlight, which has an impressive large production facility in Xanthi and has also now launched a battery assembly facility in North Carolina.  Sunlight joins other Greek companies like Raycap in Drama, which in addition to supporting energy transition here in Greece, are creating jobs and economic opportunity in the United States.

We have arrived at a moment in which American and Greek perspectives and interests in the Eastern Mediterranean and Western Balkans are more aligned than ever before.  And the growth of our bilateral energy relationship naturally translates into benefits for the wider region, where we share a common vision for advancing peace, stability, and prosperity.  A few weeks ago in Thessaloniki, we demonstrated how much we value this regional element of energy cooperation, with visits from my good friends and fellow ambassadors from Sofia, Tirana, and Skopje, as well as the State Department’s lead for Energy issues, to meet with Minister Skrekas, Deputy Minister Fragogiannis, and leading Greek energy companies.  This ongoing engagement and cooperation is important because energy diversification, transition, and strategy are core issues that will define our countries’ economic growth and security for decades to come.

Ensuring a secure energy supply is one of the pillars of the Biden-Harris Administration’s international energy policy.  That is why Secretary Blinken appointed Amos Hochstein to serve as the State Department’s Senior Advisor for Energy Security.  Amos is a longtime friend of Greece, and he recognizes the critical role that Athens can play in ensuring energy security for eastern Europe.  As Special Envoy Hochstein has pointed out, spot gases are reaching all-time highs, and there is a real risk that parts of Europe will not have enough gas for the winter, as supplies from Russia are inexplicably low compared to previous years and to what they have the capacity to provide.  Greece, with path in the Revithoussa terminal, is part of the solution to this challenge.

In the Western Balkans, Greece has rapidly normalized relations with its northern neighbors through the Prespes Agreement.  Greece and the Balkan countries are now collaborating on energy security and diversification, working to break Russia’s gas monopoly with joint investment in projects like the Alexandroupoli FSRU and IGB.  I am very glad that gas transmission operators in Greece and the region are looking at how to leverage existing networks like the Trans-Balkan pipeline to deliver gas to markets as far north as Ukraine and Moldova.  This would further reduce Gazprom’s monopoly and Russia’s political leverage over eastern Europe.

We strongly believe, as Minister Dendias and other Greek leaders have emphasized, that energy management should be an avenue for cooperation, not conflict.  That’s why the United States strongly supports Greece’s efforts to deepen its ties with Israel and Cyprus through the 3+1 framework.  We were proud to host the 3+1 Technical Working Group on Renewable Energy, where we are discussing how we can do more together in areas such as hydrogen technology and cybersecurity for infrastructure.  Our initial energy cooperation in the 3+1 framework is now expanding to new domains, like technology and partnership on proactive fire strategy and prevention, following the devastating wildfires this summer.  Collaborative arrangements like the 3+1 Initiative and the East Med Gas Forum reinforce stability and prosperity in this region.  That’s why we’re also helping Greece build connections along a north-south axis through its participation in the Three Seas Initiative, which promises to further integrate the region with Europe’s energy and communication networks.

In addition to the 3+1, Three Seas, and other fora, Greece’s growing cooperation with Egypt is important to promoting greater economic integration and stability in the East Med. Greece can increase its role as a regional energy hub through its proposed natural gas and electricity linkages with Egypt, which will also facilitate greater penetration of renewable energy and the diversification of energy sources in southeastern Europe.

President Biden has underscored the United States’ commitment to the transatlantic relationship and the U.S.-Greece relationship as we together face today’s global challenges, from climate change to the pandemic and threats to regional energy security and political stability.  That’s why the United States is so dedicated to strengthening and deepening our ties with Greece, which are stronger now than ever before, and bolstering Greece’s role as an energy hub and leader in the Eastern Mediterranean and the Balkans.

Building on the 200-year friendship between our countries, of which our robust energy partnership is a key, dynamic facet, we are working together to realize a shared vision of a stable and secure future for this region.