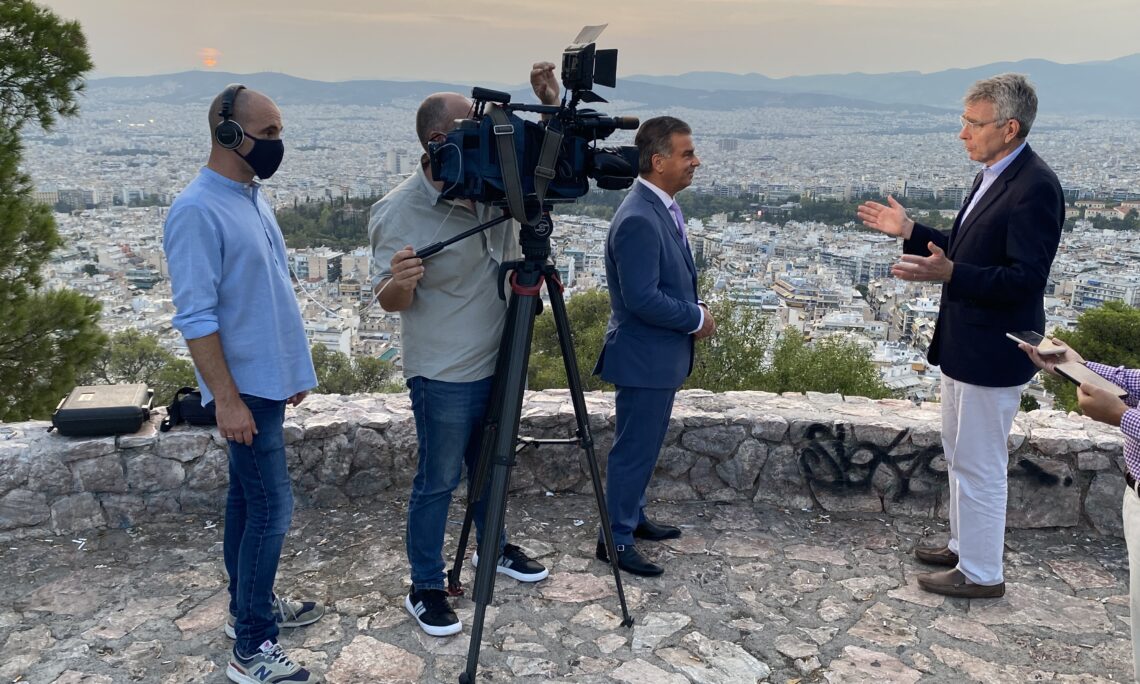 Mr. Vafiadis:  Ambassador, as we celebrate 200 years of friendship, what were the highlights of this year, where do we stand now in U.S.-Greece relations, and what are the prospects for next year?

Ambassador Pyatt:  Well, thanks, Niko, for the question.  It’s great to do this annual interview.  This is our fifth time doing this.  I think this is probably the most spectacular setting that we’ve had for one of these conversations, and it’s been a special honor to be here for the Greek Bicentennial, which is so important to your country as a marker of the progress that Greece has made, but also to the United States because of the very deep ties between our two revolutions.  It’s been a lot of fun and very much a highlight this past year for me to travel around the country to see the stories that illustrate how Americans in our young country were inspired by the example of the Greek freedom fighters, but also to be able to walk around the Agora with President Sakellaropoulou and be reminded of the ways in which Athenian democracy provided the inspiration for our own democratic experiment 245 years ago.

So for me that’s been fantastic.  We obviously had a very important political transition in the United States on January 20th.  I’m incredibly proud to be, as far as I know, the only Ambassador in the history of U.S.-Greece relations who has served under three presidents.  And I’m also very proud to say that under each of those presidents we’ve seen steady growth in the depth and the breadth of our relationship.  You know how committed President Biden is to the U.S.-Greece relationship.  He talked about it in very personal terms in his address to the Greek people on your bicentennial in March.  And I know that we’ve got big, big plans for the future.

Mr. Vafiadis:  What are the priorities of the Biden administration vis-à-vis Greece?

Ambassador Pyatt:  The Biden administration’s number one priority is to defeat the pandemic, and work with all of our international partners to see the world put back on the path to sustainable economic growth.  We’re very fortunate that there’s such a strong alignment between the philosophy and the priorities of President Biden and Prime Minister Mitsotakis and his government.  It’s also fantastic for me and all of us who work on these issues that one of the real heroes of the pandemic story globally, but especially in the United States, is a proud son of Thessaloniki, Albert Bourla.  And I remember very early in President Biden’s administration when he was placing such an emphasis on the massive ramping up of vaccine productions, he traveled with Albert to the Pfizer manufacturing facility to thank the workers there.  And you saw that just two weeks ago, as President Biden announced the beginning of the United States global campaign for vaccine distribution, it’s no coincidence that there with him for that occasion was probably the most famous Greek-American today other than Ginnis Antetokounmpo, Albert Bourla.

There’s a very good fit there.  In terms of our broad agenda, and all of the priorities that we’ve developed over the past several years through the Strategic Dialogue – defense cooperation, clean energy cooperation, trade and investment, security, our people to people ties – all of that is going to continue.

Another new item that’s been a very high priority for President Biden is the global climate crisis.  We’re seeing record temperatures in the Pacific Northwest – Oregon and Washington State and British Columbia in Canada.  45 degrees in a region where the normal temperature in the summertime is in the high 20s.  That’s a wakeup call to all of us and President Biden and his climate envoy, former Secretary of State John Kerry, have made clear that we all need to work together and we need to work harder.  And of course this matches perfectly with the priority that Prime Minister Mitsotakis has set, his very bold decision to accelerate the phase-out of coal-based power in Greece, and to move aggressively on new, cleaner technologies, many of which will be done in partnership with American companies.

So we’re in a very good spot right now in terms of our joint efforts.

Mr. Vafiadis:  You mentioned the pandemic.  It slowed down the world economy, it delayed some of the energy projects.  How has this affected the exploration southwest of Crete and other common energy projects?  And what about American investment in Greece?

Ambassador Pyatt:  I don’t think we’ve missed a beat.  First of all, you can see that American interest in this area continues.  We continue to have our 3+1 cooperation with Greece, Israel and Cyprus on energy issues.  We are actually having a meeting of our Energy Working Group under the Strategic Dialogue in the next couple of days.  So we continue to work together on these issues.

The Prime Minister’s decision on phasing out lignite is actually going to expand the scope for our work together on clean LNG.  Greece is consuming more LNG this year than ever before.  And as you continue to phase out lignite power, that’s going to accelerate.  Meanwhile, progress has continued on the Alexandroupoli FSRU, the IGB Pipeline in Bulgaria, the gas pipeline connector with North Macedonia which we think is going to come together in the next few days.

So there’s a lot that we’re doing together.

I think in terms of the East Med energy picture in particular, one of the things that’s going to change the equation more than the pandemic is the accelerated focus on climate change which is going to require an even faster transition to sustainable options like wind, solar, geothermal, all of which Greece has in abundance.  And I think it’s going to place a premium for the countries that have identified reserves.  The example of the Aphrodite deal, for instance, off of Israel.  Israel has an incentive to get that gas out of the ground and into the markets as fast as possible.  Greece is the logical place for that gas to enter European markets.

And then I would finally just note everything that’s happening along with very high gas demand in Europe right now is a very restrictive policy by Russia.  There’s real concern that many of the gas reservoirs in Europe are not being filled right now the way they need to be before winter comes again and Russia is manipulating gas in order to achieve its political objectives.  So creating the optionality that Greece provides through Revithoussa, through the IGB in Alexandroupoli is critically important.

Mr. Vafiadis:  Now on the front of the military cooperation between the United States and Greece, this has been a good year.  What are the prospects?

Ambassador Pyatt:  The best year ever.  Greece is one of our strongest partners in NATO today, and I’m incredibly proud of the partnerships that we’ve formed with the Greek Ministry of Defense and the Greek Armed Forces in all domains – whether it’s our air exercises in Iniochos, what our navies do together when the carrier groups come through the Eastern Mediterranean, what our Special Forces are doing together.  You and I had the opportunity to be at Megara the other day and see the fantastic progress of the new Greek multi-force, multi-service special forces units.

So we’re expanding our cooperation.  At the same time, we’re developing new areas of operations.  Our presence at Alexandroupoli – Alexandroupoli has been extraordinarily busy this year.  There’s actually another big ship there right now.  Rail cars bringing some of the European forces out and loading them onto ships to go back to the United States.  And very soon we will begin the deployment of the combat aviation brigades coming into Greece for their winter rotation back at Stefanovikeio.  We’re very busy in Alexandroupoli.  We have our exercises that we’ve already conducted very successfully up in Xanthi, in Thrace.  We continue our rotations through Stefanovikeio, and it’s important that those exercises took place this year even through the pandemic in a very complex environment.

So we’re doing an awful lot, but we have a big agenda for the months ahead.  I’ve spoken to both Minister Dendias and Minister Panagiotopoulos over the past couple of days about our shared commitment to expanding and deepening our Mutual Defense Cooperation Agreement, our MDCA.  I’m very confident that’s going to happen because the political decision has already been made on both sides.  And now we also have this fantastic initiative from Senator Menendez and Senator Rubio for a new supplement to the East Med Act specifically focused on deepening our defense ties with Greece, providing a legislative mandate, for what the Pentagon and the State Department and the White House have been doing already.  Strong support also from the House.  So that’s going to proceed as well.

I feel very, very confident about where we are on our defense relationship.  And that cooperation is more important today than it’s ever been because we are so focused on addressing our shared interests, whether it’s in the Eastern Mediterranean, the Western Balkans or beyond.

Mr. Vafiadis:  How would you assess the dialogue between Greece and Turkey from an American perspective?  And how does it change the geopolitical environment?

Ambassador Pyatt:  From an American perspective, first and foremost we support the initiatives that Prime Minister Mitsotakis has taken.  We share his objective in terms of lowering tensions, ensuring that all parties in the region act within the framework of international law and avoid provocative escalatory steps.