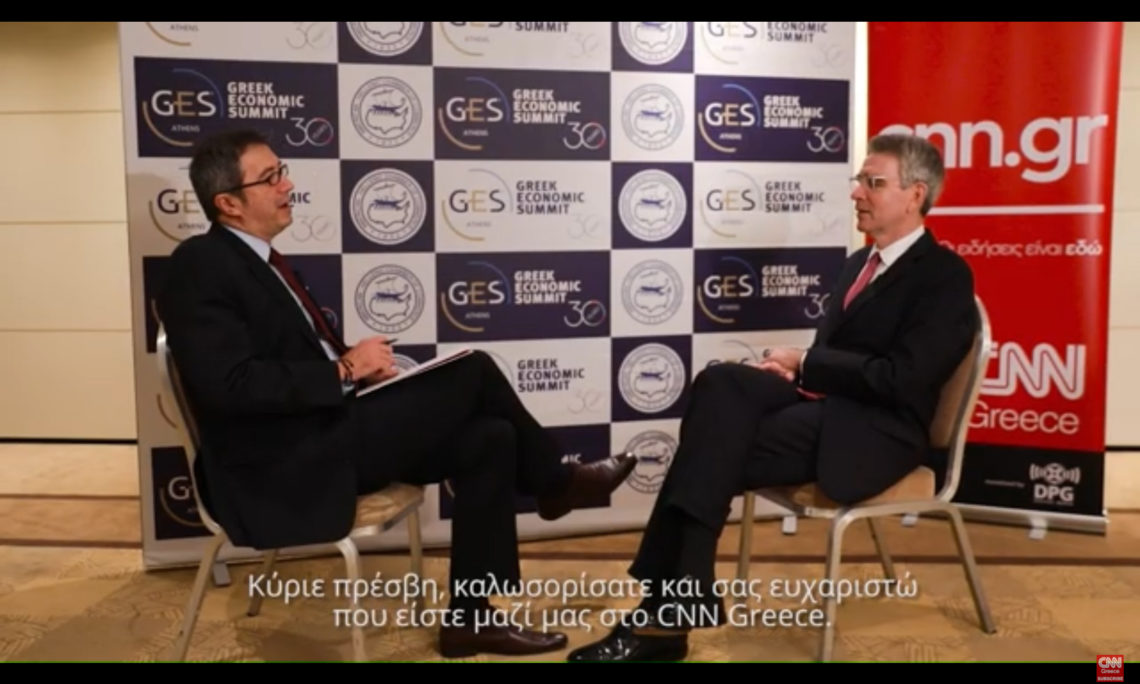 Interviewer: Mr. Ambassador, welcome and thank you for being with us at CNN Greece. We are in the Economic Summit of the American-Hellenic Chamber, about the economy, and let’s start with economy. According to recent data, bilateral commercial relationships between Greece and the United States have been growing fast. But Greece’s main concern is how to attract investments. Greece has a new development law, and hopes to attract investments. Are we about to see new investments from the U.S.? Of course, there are some, and many discussions, but maybe you agree there are also some reluctancies from the U.S.?

Pyatt: I think the picture is starting to change, and it’s changing fast in response to the steps that the Greek government has taken. You mentioned the development law, very clear signals from the Prime Minister in terms of his commitment to attracting foreign investment and streamlining the bureaucracy. Positive signals from the Ministry of Digital Policy and Minister Pierrakakis, steps that are being taken there to facilitate high-technology investment. So we’ve got successes like Pfizer and Cisco’s announcement of their new centers in Thessaloniki. Another sector of traditional Greek excellence is ports, maritime logistics. I’ll be traveling to Syros this afternoon with Minister Georgiadis for the revival of the Syros shipyard, which has been facilitated by American investment. We’re very excited about the opportunities in Alexandroupoli for the privatization of the port there, and in Kavala, and significant American investor interest there as well. And then, finally, we’re very close, hopefully, to an announcement on the Hellinikon casino-resort development, which will be an investment of up to $1 billion by one of the two competing American companies. So I think you’re already seeing investors responding to the opportunities here. I also think we all have to work harder to get the word out in New York and Chicago, in Houston, in San Francisco about how fast the picture has changed here, that Greece is back, and that this is a government that is committed to building on the process of reform to move the Greek economy forward.

Pyatt: It does indeed.

Interviewer: Does this agreement provide with some extra advantages far beyond the financial part? How big is the American interest in the privatization of Alexandroupolis’ port?
Pyatt: So let me—you’ve got two questions there. First of all, in terms of the defense and security relationship, it really is at an all-time high right now that reflects the U.S. investment in Greece as a pillar of regional stability, the priority that our military leaders have placed on developing the partnerships here, but also the judgment that Prime Minister Mitsotakis, the Greek government, like the previous Syriza government made about the advantages that Greece derives from the closest possible defense and security partnership with the United States. Alexandroupoli is a significant piece of that. We see Alexandroupoli as a strategic port. It’s of interest to the U.S. military for flowing U.S. forces and resources into and out of the Black Sea, Central European regions, but it’s also important because of Alexandroupoli’s strategic location, its importance to the regional energy picture, we’re very focused on the floating regasification facility, the FSRU, at Alexandroupoli and the relationship between that and the TAP pipeline and the IGB pipeline to Bulgaria, so, you’ve got a really important story there. Whether or not American companies bid on the privatization is going to depend on the structure of that deal, but I’m very encouraged by the high level of interest that we are seeing right now.

Interviewer: You mentioned energy. Where does the American – Greek cooperation in energy stand? We have new rumors, of course, and a discussion about the drills and deposits in Western Greece. Is there any U.S. interest in the region?

Pyatt: So, energy is one of the real bright spots of U.S.-Greece cooperation. It’s changed dramatically over my three-and-a-half years here. You have the emergence of Greece as a significant European energy hub with the completion of these infrastructure projects that I talked about, you have the expansion of the Revithoussa terminal, the beginning of U.S. LNG exports to Greece which are part of the larger story, the changing international gas market, the price competitiveness of the United States, and the global security implications of the United States’ emerging as the world’s largest oil and gas exporter. So, there is a lot happening in this area. You mentioned upstream exploration as well, we were very pleased by the Greek Parliament’s approval of the concession to ExxonMobil, Total, and Hellenic Petroleum for exploration off the coast of Crete, so there’s a lot going on in this area. Then also the renewables, where we see fantastic potential. Prime Minister Mitsotakis has set a very bold goal for the elimination of Greece’s lignite power by 2028, the only way you’re going to meet that target is through significant new investment in renewables, but also gas-fired electricity as a bridge. So, the United States expects to play a major role in all of these sectors.

Interviewer: Mr. Ambassador, let’s move to another topic, Turkish provocativeness in the Eastern Mediterranean, especially in the Cyprus EEZ…

Interviewer: …has been constant. Are you worried about Turkey’s stance in the region, and how legal is for the U.S. Administration the recent agreement between Turkey and one of Libya’s governments, to be more precise, on the EEZ? What will the U.S. do if the Turkish provocativeness escalates further?

Pyatt: So, I’m not going to answer any hypothetical questions, but let me start by saying first of all that the United States has consistently called for all sides to avoid provocative behaviors. We greatly appreciate the steps that Greece has taken, the fact that the first phone call that PM Mitsotakis received after his election was from President Erdogan, the fact that Defense Minister Panagiotopoulos has engaged with Minister Akar. There’s a clear signal from Greece in terms of the desire to manage tensions with Turkey, to keep a positive focus on the economic story here, and to deal with difficult issues including maritime claims, there’s also the migration issue, which is a major factor in Greek domestic politics today. On the specific issue of the delimitation agreement which we’ve seen reports of, we haven’t actually seen the text of this agreement, this MOU that Turkey signed, our view is very clear. This is unhelpful, it’s provocative, and it’s contrary to the spirit of the consistent U.S. message in terms of our desire to see the Eastern Mediterranean and this wider region be a zone of cooperation and constructive engagement as opposed to an area of tension. There’s a lot of potential for that cooperative agenda including on the energy issues, but it’s gonna take political will in both capitals, and we’re working to achieve that goal.

Interviewer: And my last question, the European Union’s recent “No” to North Macedonia to start accession negotiations with the European Union caused a mini crisis in the neighboring country, and as we all remember, maybe there was a temporary controversy about whether the Prespes Agreement was viable. There were also some voices within the government’s party in Greece that say that Greece should disengage from the agreement. Is the Prespes Agreement really, do you think, in danger, and what could the U.S. do in order to boost both northern Macedonia both and Albania’s EU bid?

Pyatt: So, the Prespes agreement represented a historic breakthrough which the United States supports absolutely. We saw the European decision on accession for North Macedonia and Albania as a historic mistake, we made that very clear. I was in Skopje a couple of weeks ago. I was really impressed to see how Prespes and the constructive engagement from Greece has transformed the conversation about neighborhood relations. That was also very clear a couple of weeks ago when Prime Minister Zaev was in Thessaloniki for the Thessaloniki Summit and had very good conversations with Prime Minister Mitsotakis, and I think everybody in the room got the sense of how Greece has become one of the great advocates of seeing that all these countries continue to move towards European institutions, towards the Euro-Atlantic family. The next steps in terms of where we go on this, the United States has just deposited our instrument for North Macedonia’s membership in NATO – we expect that that’s going to continue to move ahead. We are also going to continue to strongly support the efforts that Greece is making to turn around the European decision, we were very encouraged by the results of Foreign Minister Dendias’s visit to Skopje, I was glad to see a report this morning in the Financial Times about the efforts that PM Mitsotakis is making on this issue as well. So, we’re going to keep working on this, there’s a very strong convergence between the Greek analysis and the American analysis of what needs to be done, and we’re also going to continue to be good partners and allies with North Macedonia, and we see Greece, Greek companies, playing a principal role in helping to see that North Macedonia continues to move towards the European path, and towards the reforms that will make it a stable and prosperous neighbor for you.

Interviewer: Mr. Ambassador, Thank you very much for being with us at CNN Greece.

Pyatt: Yes, good to see you, thank you.