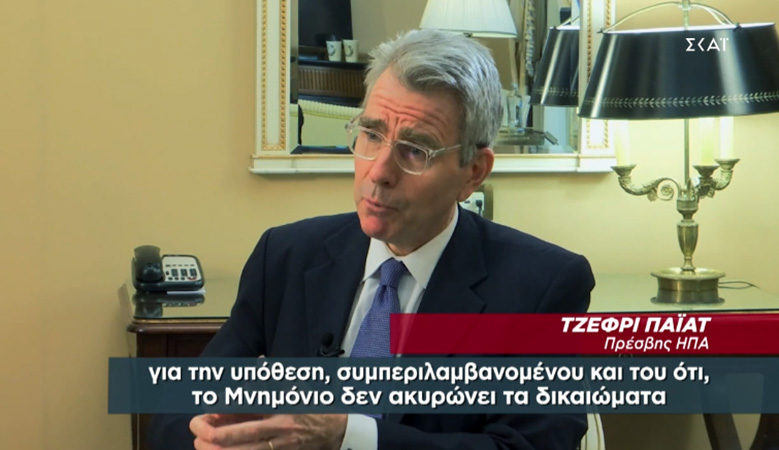 Ambassador Pyatt: Thank you for having me.

Skai TV: Let me start the discussion with an issue that has monopolized the public discourse over the last few months, and I’m talking about the Turkish-Union Memorandum.

What if Ankara materializes its declaration? It started exploratory drilling activities. Say for example, in south of Crete. In that case are you worried for possible escalation or maybe an incident?

Ambassador Pyatt: Let me say a couple of things.

First, we’re going to try to avoid speculating about the future. Washington has spoken very clearly on the MOU itself. We see it as destabilizing and unhelpful. I’ve made very clear the United States‘ legal interpretation including the important fact that this does nothing to take away the rights that Greece is entitled to under international maritime law. These are issues that need to be settled through dialogue and negotiation, not through unilateral action that ignores the rights and interests of one of the affected parties like Greece in this case.

I think the other really important principle is that Greece and the United States are agreed on the importance of continuing to work to manage a more normal relationship in the Aegean and in the Eastern Mediterranean. That was a powerful message from Prime Minister Mitsotakis’ very successful visit to Washington, DC. It was reaffirmed in the historically important letter that Secretary Pompeo sent just a couple of weeks ago, laying out very clearly the United States’ commitment to stand with Greece and to support Greece’s security as we continue to work together as allies in this very complicated region.

Skai TV: So I understand that in a possible escalation the U.S. would intervene as it did in the past.

Ambassador Pyatt: I think what you — we’re going to try to avoid speculating about the future. What we’re going to focus on is how we work to support the efforts that Prime Minister Mitsotakis and his government are making including through the discussions this week here in Athens — the delegations from the Ministry of Defence, the Ministry of Foreign Affairs — to develop confidence building. That’s where the United States wants to see the focus. We want to see the focus in a positive way on how to build a zone of stability, prosperity and shared interests.

Skai TV: Is the U.S. continuing their diplomatic efforts to deescalate tension as Minister Pompeo said during Mitsotakis’ visit in Washington.

Ambassador Pyatt: Of course. We are engaged. We will remain engaged. This is a priority for the United States. It’s very much part of the conversation — just two weeks ago when SACEUR, General Wolters, was here in Athens and in Ankara — this is a daily focus of American politics and American engagement through our diplomacy in the Eastern Mediterranean and Aegean regions.

Skai TV: Allow me clarification on your recent statement. I understand that when it comes to the way that the U.S. interprets international law of the sea, inhabited islands are entitled to the same treatment as continental territory. Does that apply also to non-inhabited islands? Large and small islands like, for example, Kastellorizo?

Ambassador Pyatt: It applies to islands as a general principle. There’s been a lot of confusion about this. I don’t want to add to the confusion tonight. What I would emphasize is our view that islands as a general rule are just like continental territory in terms of the rights that they are entitled to under national maritime law. End of discussion.

Skai TV: But it’s all islands.

Ambassador Pyatt: It’s all islands. I will let others get into the discussion of what is a rock and what is an island, but islands are all the same.

Let me shift to a discussion on Libya. It looked like Turkey is constantly violating the arms embargo agreement at the Berlin Conference. How does it reflect to its credibility as a force involved in the peace process, in the Berlin process; whereas Greece or countries of North Africa are excluded from this process?

Ambassador Pyatt: We have an active conversation with Greece on these issues. It’s something that Secretary Pompeo has talked about with Foreign Minister Dendias. It’s an issue that I’ve had an extensive dialogue on with my counterparts here in Athens.

We are very, very focused on how to deescalate the violence in Libya. We’ve called on all of the parties — that includes Russia and its mercenaries; that includes Turkey; that includes the Gulf Arabs — to cease actions including weapons deliveries that deepen the violence and deepen the tension.
There was an important declaration from the Europeans this week. We’re going to see what happens. But the United States is focused on getting the diplomatic process back on track.

Ambassador Pyatt: I don’t think we’ve taken a position on that issue per se. We recognize that Greece has important interests here. The Berlin Conference was not an American event. That’s an issue to put to your European allies. And I think it’s significant that Foreign Minister Dendias participated so actively. And there’s a pretty clear and consistent signal from the European Union, from the Foreign Affairs Ministers this week. So let’s see what happens for the next go-around.

I’ve heard clear messages from countries like France on this and ultimately it’s going to be a European decision.

Skai TV: Let me shift the discussion to the Mutual Defense Cooperation Agreement that has been ratified by the Greek Parliament very recently. I wonder what is the footprint for Greece? And we talk a lot about the Alexandroupolis Port. I’m really not sure what exactly, how the U.S. will exploit these capabilities.

Ambassador Pyatt: So this agreement was an important accomplishment for both of our governments. That was made very clear by everybody that Prime Minister Mitsotakis met with when he was in Washington in January. I think there’s great appreciation for the leadership that the Prime Minister is exercising, in the way that Foreign Minister Dendias, Defense Minister Pangiotopoulos has worked with this.

I know when the Defense Minister met with our most senior Senate leaders at the Munich Security Conference this weekend, that the delegation chaired by the Chairman of our Senate Armed Services Committee expressed great appreciation for the opportunities that the MDCA, the Revised MDCA is going to open to continue to deepen our ties, to create additional opportunities for our forces to work together.

I’m very excited tomorrow, I’ll be going up to Stefanovikio with some of our colleagues from the Hellenic Armed Forces to watch in action the U.S. Combat Aviation Brigade which has been living at Stefanovikio since the fall, working every single day with their Greek counterparts, building interoperability, developing capacity, helping both sides as allies to know each other better.

Alexandroupolis is a very important piece of this. There are a couple of different things that come together in Alexandroupolis. One is the prospect of continuing to develop the use of that facility as an entry point for NATO and U.S. forces flowing into the Black Sea Region, into Bulgaria, into Romania. We’ve done it in the past. You’re going to see more of it in the months ahead. But also very important is what’s happening in Alexandroupolis on the energy story where you have the FSRU which we’re strongly supporting to move ahead. You saw we had a delegation from the American Development Finance Corporation in Alexandroupolis last week. The American investors, including Black Summit and Seattle’s SSA Marine, have a strong group of Greek partners including Goldair, which I met with last week to hear about their perspectives on this project.

So you see a very powerful coalition of companies that are coming together to develop Alexandroupolis as what it has never been, which is a major transit hub for goods going into the Western Balkans and also to the Black Sea region. So a fantastic opportunity there.

And you’ve got the energy piece. The FSRU, the TAP Pipeline coming on-line, the IGB pipeline. It’s very exciting that Prime Ministers Mitsotakis and Borissov will be meeting in Alexandroupolis next week.

So clearly this city that felt like it was on the final frontier when I visited it for the first time, I think, in early 2018, is now a focal point of strategic thinking, but also of economic and military activity. And we’re very grateful for what we’re doing with our Greek counterparts.

Skai TV: Let’s focus a little bit on the economy. What’s next to come on American companies investing to Greece? You’ve been in the country for more than four years now and you’ve seen the economy picking up. Are there any tangible investments that you foresee in the future for American companies? And what areas did you designate?

Ambassador Pyatt: That’s a good question for Minister Georgiadis and for the Greek government. They clearly are seeking to create the conditions for more growth. We’re very excited about what’s happening in the technology sector with companies like Deloitte and Pfizer. Minister Georgiadis is focused like a laser beam on the Elefsina shipyards, building on the success we have at Syros.

There’s a lot happening in the tourism industry, in the property development sector. We’re obviously hugely focused on the final decision on the Hellenikon development. That will be a billion dollar project as it comes together, so really transforming the tourism economy of the Attica region.

So what’s changed most dramatically over my time here is now there’s not a week that goes by when I do not have some American investor in my office saying there seems to be a lot happening here in Greece. Tell me about it.

So clearly Greece is back on the radar scope for American investors. The government is trying to make the case that the time to put the money in is now. I agree. The time to move into Greece is now because the government has sent the right signals. And as the Prime Minister said in Washington, Greece is relatively inexpensive today. It will not be in the future.

Ambassador Pyatt: I think we always have to be worried about the risk of miscalculation when you have advanced military forces operating in close proximity. I’m more optimistic today because I see the really strong effort that the Prime Minister and his government are making to lower tensions and to create a more normal atmosphere. So that’s our focus at this point.

Skai TV: Thank you very much.

Ambassador Pyatt: Thank you. It was great to talk to you.