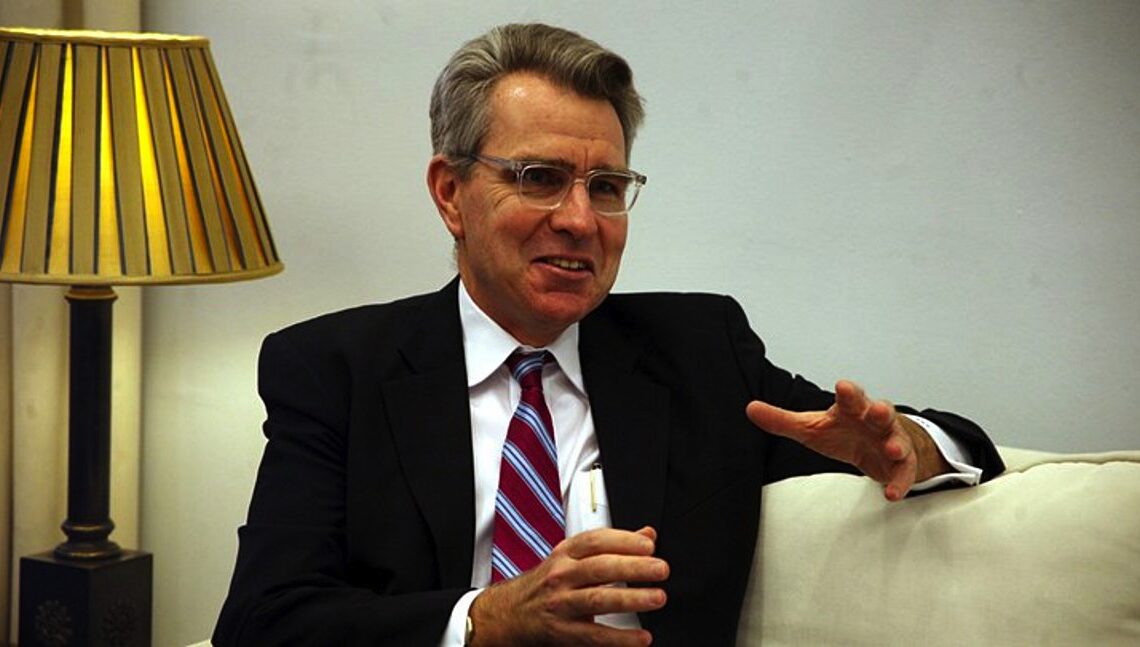 Real News: You recently described Souda Bay as the most important platform for the projection of American power into a strategically dynamic Eastern Mediterranean region.  Do you plan to raise again the subject of an extension of the MDCA for a multiple year period?

Ambassador Pyatt: The U.S.-Greece relationship is at a historic, all-time high. Our enhanced relationship with Greece is based on common goals and a considered strategy that recognizes the return of great power competition to the Eastern Mediterranean. Greece is a pillar of stability and a key NATO Ally when it comes to halting expanding Russian and Chinese influence in an increasingly complicated strategic environment. We are pulling together all the strands of American power to face these challenges and to advance our shared defense and security goals, as enshrined in our bilateral Strategic Dialogue and our updated Mutual Defense and Cooperation Agreement. Our 3+1 Dialogue with Greece, Israel, and Cyprus, launched by Secretary Pompeo in Jerusalem last year is a good example of this new American strategy. The East Med Act championed by Senators Menendez and Rubio in Congress is another.

Over the past few years, the United States’ operations have expanded significantly at Souda Bay, the “crown jewel” of the U.S.-Greece defense and security relationship. The January ratification of our updated MDCA enables us to further advance our shared goals for NATO cooperation and joint exercises. An enhanced U.S. presence at more locations in Greece sends a powerful signal to our adversaries that Greece and the United States are united in support of regional peace and stability. We recently welcomed the 101st CAB to Alexandroupoli for its rotation in Operation Atlantic Resolve, and the Eisenhower Carrier Strike group participated in exercises with the Hellenic Navy south of Crete. The new expeditionary Sea Base, the USS Hershel “Woody” Williams, was recently at Souda and continues operations in the Eastern Mediterranean. This fall, we also look forward to welcoming the 101st CAB to Stefanovikio air base as part of our regular winter rotation cycle. We will continue to work with our Greek partners to strengthen our defense cooperation, including our discussions about extending the MDCA.

Real News: The Neorion Shipyard is owned by the American company ONEX, and as you recently stated, it is certified by the U.S. 6th Fleet, by the U.S. Navy, for the maintenance of U.S. military vessels. Does the US Navy plan to reallocate a part of the 6th fleet maintenance work to Greek shipyards?

Ambassador Pyatt: The United States views Greece’s maritime sector as a sector where Greece has historically excelled and one with great symbolic significance, but also a sector critical to the further deepening of our defense, technology, and energy relationships. ONEX’s success with the Syros Neorion Shipyard has proven how American investment can transform Greece’s underutilized maritime infrastructure. I visited Syros in July with four Ministers, including Minister Georgiadis and Minister Panagiotopoulos, for a very strong show of support from the Greek government. The shipyard is now operating at full capacity, has serviced a record number of ships since its reopening, and has contributed over 90% of new growth to the shipbuilding industry’s overall growth from 2017-2019. Now that the shipyard is certified by the 6th Fleet, the U.S. Navy has a competitive “local” option that benefits Greece. We see a very important national security interest in strengthening Neorion’s capacity to service American and Greek military vessels. Both the U.S. and Greek governments are committed to achieving the same success at Elefsina that we’ve seen with ONEX’s investment in Syros. In addition, the U.S. Development Finance Corporation has identified the Elefsina Shipyards as a strategic infrastructure asset and has signed a retainer letter with ONEX to pursue the purchase and renovation of the shipyard, further enhancing the value proposition that Greece represents as a strategic ally and partner in the Eastern Mediterranean.

Real News: There is a great American interest for the harbor of Alexandroupoli, U.S. companies are going to participate in the tender. Why is this harbor so important for you?

Ambassador Pyatt: I’m proud to have visited Alexandroupoli more than any other U.S. Ambassador to Greece, and this record emphasizes the city’s strategic role in the United States and Greece’s shared vision of building European energy and regional security. Alexandroupoli is poised to become a regional hub for energy, transport, commerce, and defense with the completed market test for the FSRU terminal and plans for a gas-fired GE power plant. It is also a city where Russia tried very hard to exercise malign influence, including through a cooperative relationship (now cancelled) between the Alexandroupoli Chamber of Commerce and the Chamber in Russian-occupied Crimea. The geostrategic location of its port and its rail and road networks feeding into Eastern Europe offer an important channel for the transport of troops and equipment to and from the Balkan and Black Sea regions. The port’s upcoming privatization, combined with its improved access and flexibility due to the U.S. Army’s removal of the Olga in 2019, creates further opportunities to boost the Greek economy. The American investment fund BlackSummit Financial is leading the way here with a strong consortium that includes U.S. investors, Greek participants, and a European port operator with regional experience to bid on the Alexandroupoli and Kavala ports. Meanwhile, the Greek government’s resolution of the land issues at the port and visits from Minister Plakiotakis, Minister Panagiotopoulos, and others provide further evidence that the Port of Alexandroupoli is a government priority. So as the Port of Alexandroupoli celebrates 150 years of operation, we will continue to develop this important maritime asset to advance our joint defense and security goals.

Real News: What are the perspectives for more US-investment in Greece?

Ambassador Pyatt: One of our Embassy’s top priorities for 2021 is to help ensure that Greece has a V-shaped recovery curve, returning to economic growth as quickly as possible. American companies and American investors are going to play a critical role in that regard. Greece is forecasted to return to economic growth in 2021, in large part because of the Greek government’s effective management of the COVID-19 pandemic, which saved lives and boosted Greece’s reputation as a safe and reliable investment destination. All of the large energy projects where U.S. investors have expressed interest—the Alexandroupoli FSRU, IGB, and TAP, projects that underwrite political and economic stability throughout the region—have long time horizons and continued to move forward during the pandemic. Similarly, in tourism, work has begun to clear out Hellinikon and launch the integrated resort complex, an American investment of approximately $1 billion that will transform the Athens Riviera.

At the same time, the digital transformation of the Greek government, aided by American high technology companies, has opened up further investment opportunities in Greece. The government’s increased protections for intellectual property led to Greece’s removal from the Special 301 list this spring after 12 years. As a result, Greece’s relationship with Microsoft has grown: Microsoft has acquired the Greek company SoftoMotive and recently announced that it will launch a robotic process automation hub in Athens. This is in addition to the Pfizer and Cisco innovation centers that are coming online in Thessaloniki, leveraging the city’s large student population and the supportive government environment to turn Thessaloniki into the tech capital of the Balkans. The seeds of these investments were sown at the Thessaloniki International Fair in 2018, and we look forward to continuing to build on that legacy in the technology and investment areas.