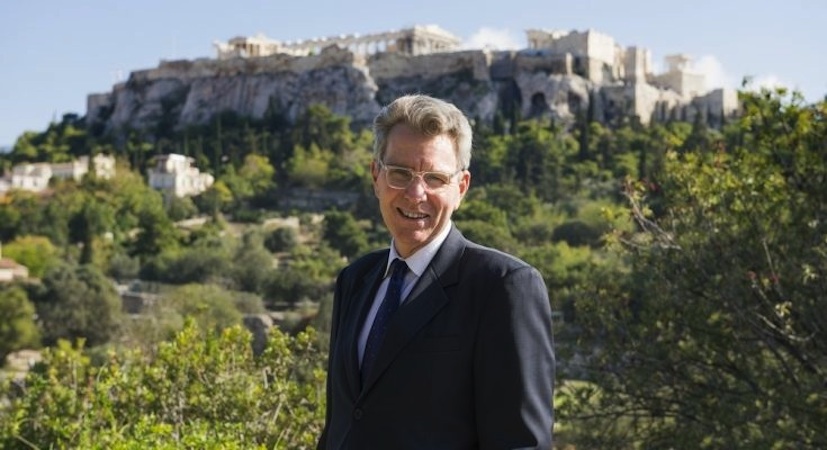 Naftika Chronika: After the recent agreement between Onex and Elefsina shipyards, there is an ever-increasing American interest in ports such as those of Alexandroupoli and Kavala. What are the reasons for the U.S. interest in solidifying its maritime presence in Greece?

Ambassador Pyatt: The United States views its maritime investments in Greece as strategically important both for commerce and for regional defense and security. We consider Greece to be a pillar of stability in the region, a country that is vital to our strategic interests. We are committed to achieving the same success at Elefsina that we’ve seen with ONEX’s investment in Syros, which is now certified by the U.S. Navy for the maintenance of U.S. military vessels. We see a very important national security interest in keeping Elefsina in Western hands and strengthening both shipyards’ capacities to eventually service American and Greek military vessels, as well as its role supporting regional energy trade. I visited the Port of Alexandroupoli in July with Minister Panagiotopoulos to welcome elements of the 101st CAB onboard the ARC Endurance, the largest ship ever to dock at the port. Its ability to dock there was a direct result of the U.S. Army-funded project to remove the sunken dredger Olga in 2019. The American investment fund BlackSummit Financial is leading the way with a strong consortium that includes U.S. investors, Greek participants, and a European port operator with regional experience to bid on the Alexandroupoli and Kavala ports. The United States benefits greatly from working with Greece and its important maritime assets, from our longstanding relationships at Souda Bay to our increased use of the ports like Alexandroupoli under the revised MDCA.

Naftika Chronika: During the past months, Iran and Venezuela have been cooperating, despite U.S. sanctions. Do you think that such practices could potentially disrupt international trade?

Ambassador Pyatt: The United States has undertaken a series of strong policy actions since 2017 to pressure the former Maduro regime and support democratic actors in Venezuela, and we continue to work closely with our partners and allies around the world to stop Iran’s destabilizing activities and to hold its leaders accountable.

We applaud Greece’s actions as well. For example, the Union of Greek Shipowners (UGS) recently confirmed its commitment to implementing the U.S. ban on trade and economic transactions with Venezuela and other countries. Several prominent Greek shipowners joined the UGS and announced their own commitments to refrain from doing business with the illegitimate Maduro regime and to comply with U.S. sanctions. As you know, Greece is a world leader in shipping and Greek shipowners control 32 percent of the world’s oil tankers, so this UGS commitment is extremely important. U.S. authorities will continue to target those who enable the Maduro regime’s corrupt use of Venezuela’s oil assets.

We also appreciated Greece’s prudent and cooperative approach last August in dealing with the Iranian oil tanker Grace 1, which unloaded its cargo in Syria in violation of EU sanctions. Greece made clear that it would have nothing to do with that ship, an important response that supported our efforts to address Iran’s malign behavior.

Naftika Chronika:  What is Greek shipping’s contribution to the foreign trade and economic growth of the U.S.?

Ambassador Pyatt: Greek shipping is a vital enabler of global trade, and we greatly value this aspect of our relationship, including the leading Greek shipping companies that are listed on the New York stock exchange. The strong U.S.-Greece maritime relationship is also driving for greater American investment and trade, particularly in the energy sector. Greece’s LNG imports almost doubled year on year in the first half of 2020, and U.S. LNG supplies to Greece more than quadrupled in the same time period to almost 1 Bcm, accounting for around half of the country’s total LNG imports. As LNG demand grows, Greek shippers are taking the lead in transporting U.S. LNG to global markets. Greeks are now the largest LNG ship owners, with 15% of the global LNG fleet, giving Greece a major role in the global LNG supply chain and reaffirming that Greek ship owners are leading innovators in the maritime industry. And as I noted earlier, ONEX has resurrected the Neorion Shipyard in Syros, creating close to 600 jobs and reaching nearly full capacity this year. Likewise, removing the Olga from the Port of Alexandroupoli improves access and flexibility and enhances the port’s capacity for multiple users, increasing its attractiveness for American investors.

Naftika Chronika:  What has the U.S. Embassy received as intelligence and information from the U.S. Coast Guard regarding the quality of the Greek and European Merchant Fleet?

Ambassador Pyatt: Greek-flagged vessels are known in the U.S. for their stellar safety record. The U.S. Coast Guard collates and publicly reports the number of safety deficiencies and detentions found during inspections in the United States in order for flag states to be able to conduct proper oversight. No Greek vessels have been detained in the last year, and only one vessel was detained in 2019. Furthermore, in 2019, 83% of Greek flagged vessels that pulled into port in the United States were found to have no safety deficiencies during inspection. We appreciate the high standards set and adhered to by the Greek and European Merchant Fleet. The United States is also very proud our terrific collaboration with the historically important Greek shipping industry. It is a relationship that is getting stronger every day as our countries work more closely together than ever before!