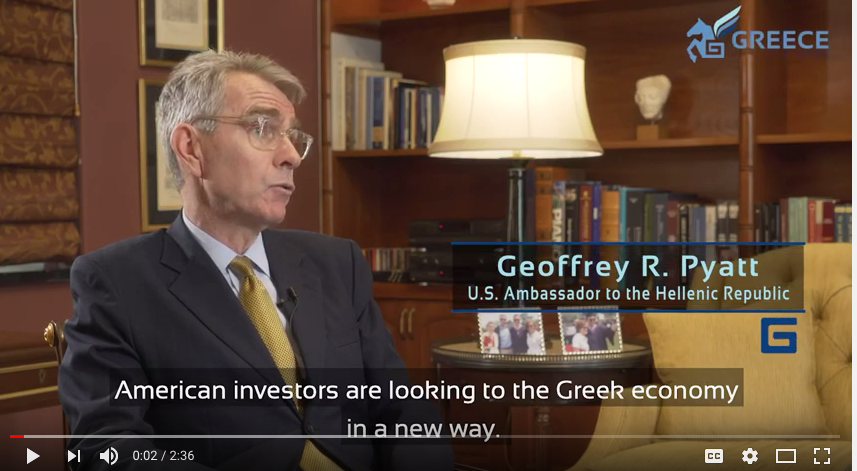 The Time to Invest in Greece is Now

American investors are looking to the Greek economy in a new way.

One, of course, is energy. You see a very large new investment from Exxon Mobile jointly with Hellenic Petroleum and Total.  Also General Electric has come back to the Greek market with its renewable energy technologies, and I think you are going to see more and more of that in the months ahead as Greece consolidates its role as a European energy hub but also leverages the resources this country enjoys and the good policy signals that we are seeing from the government. So energy is important.

Tourism has become a very large part of the Greek economy.  You’ve got some big new investments coming into the sector, U.S. brands like Starwood and Avis are growing their presence here. You had a $300 million dollar investment announced by Blackstone looking to invest in and upgrade Greek hotel properties. And, of course, there is the prospect of a very large U.S. investment in the hospitality and entertainment sector as the Hellinikon project goes forward. That could be on the order of a one billion U.S. dollar investment from one of the two leading U.S. bidders for that project,  Hard Rock and Mohegan gaming, so we are very excited about that.

And then the startup and technology sector is the sort of the untold success story. I’ve been deeply impressed over the past three years as I’ve travelled around the country to see how innovation is going on, not just here in Athens but in cities like Patras, Thessaloniki and Ioannina. We have, for instance, the big investment announced by Pfizer and they will be establishing a new artificial intelligence center in Thessaloniki — two hundred people to begin with, and I know the company is very excited about the human capital they see here.   There is also a new Thessaloniki center that is being set up by Cisco, again focused on high technology and innovation. There’s the new presence here from TESLA, here in Athens with their new research and development center focused on drive trains. ANSYS, which has made an acquisition in the area of software and innovation systems — they’ve done an acquisition here in Greece leveraging the expertise they’ve found in software and engineering.

So, I’m very bullish on the opportunities we see here, but also quite optimistic about what we are going to be seeing in terms of more American companies and American investors looking to leverage all that Greece has to offer.

The Time to Invest in Greece is Now