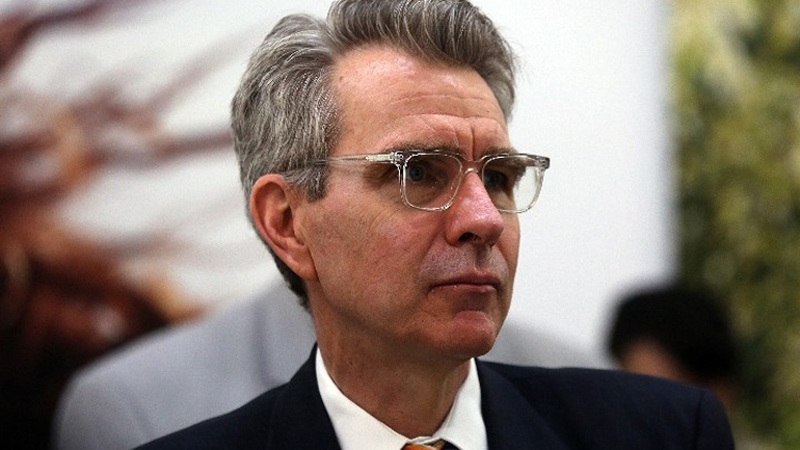 I want to ask you what you think about your presence here in Thessaloniki.

Ambassador Pyatt: First of all, it is great to be back in Thessaloniki. I had to go back to Athens for a couple of days. I’m back here today for the ship reception that we’ll have later this evening, but I also wanted to visit the Pavilion and see how the companies are doing.
Its wonderful to see how much interest there still is. I’ve heard very positive reports from the American companies about the business connections they’ve been able to make, about the talent they’ve found when working with the small and medium enterprises across the road at the startup Pavilion. And today’s focus is particularly on some of the digital and technology issues.

So I was part of the new Google partnership with the city of Thessaloniki to help lift up tourism. We have our digital influencers hub today and tomorrow which is happening here as well. Again, focussed on American technology, now technology is changing the world we live in. So I spent a little time of course with Google, with our partners at Facebook. It’s all very very exciting and its great to have such a strong representation of American firms here at the Thessaloniki fair.

Ert3: What are the benefits of this cooperation of Greece with the U.S

Ambassador Pyatt: So a great example is what Google has just launched with the city of Thessaloniki to help small and medium tourism focused companies improve their web presence, grow their business, working with Google.

That’s just one example of many. And you see this across the board. All of our companies, IBM, Oracle, they are all committed to be good partners with the small and medium sized Greek startups that are operating at the start of their life. But more importantly, continuing to create opportunities to the Greek economy up into ensure that this is the year that the Greek economy moves forward.

Ert3: I just wanted to say that the Greek economy has been many years in recession so do you think that Greece as a country can become again an investment opportunity for foreign companies

Ambassador Pyatt: Thats why we have such a strong American business presence at our Pavilion this year. We had more than 50 American companies. As you can see, they brought their best game, which is their presence here. And I think that’s a reflection of confidence in the Greek economy. Confidence in the fact that the Greek economy is lifting up. The enthusiasm about the human capital, the great potential. Greek society. And the recognition that now that the crisis appears to be ending there’s a real chance to grow for the future, and American companies want to be part of that.

Ert3: Do you believe that innovation can be the key to our economic development in this country

Ambassador Pyatt: Sure. It’s clear that for a long time the strengths of the Greek economy are going to be what they’ve always been. Logistics, agriculture, tourism. It’s also very clear that all of those sectors can be lifted up by technology. So whether it’s, again the example of Google and the tourism sector of what we are doing with Rutgers University and the American Farm School to lift up technology in agriculture, it’s all about taking what you’re good at and lifting it up to the next level.

Ert3: Thank you very much.