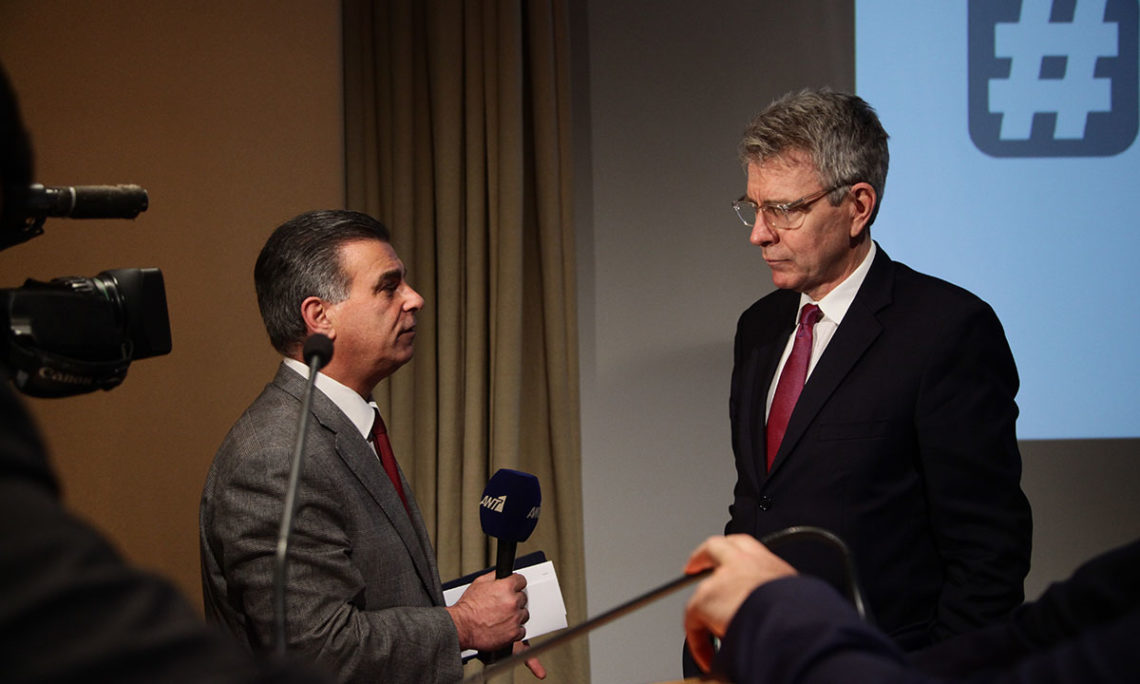 Ambassador Pyatt, are you worried we might have a disinformation campaign in Greece as the Euroelections, local elections, and political elections come close?

As I said, all of our open societies are vulnerable to these new tools. We learned this the hard way in the United States during our presidential election. We’ve seen evidence of this kind of manipulation of information in Greece. We’ve seen Russian efforts in the Church, the efforts to undermine the role of the Ecumenical Patriarch. I cannot tell you that I have seen evidence of efforts in order to meddle in Greece’s upcoming elections, but the purpose of this event tonight is to raise awareness so that Greece’s democratic institutions, Greece’s free press — which are all quite strong — can be alert and able to respond.

Now, why did you choose Athens as one of the stops on this campaign of this Disinfo Week?

So, there were a couple of reasons. First and most importantly, is the fact that this is the birthplace of democracy. We have to constantly remember that. The West owes Athens, owes Greece an enormous amount. So it’s an appropriate location to mark that. It’s also an appropriate location because Greece has been for many many centuries a venue of geopolitical competition. I talked about that in my remarks, so it’s appropriate in that regard as well. It also worked well in the context of the effort that the Atlantic Council has been making with the Embassy’s and my strong encouragement to look more seriously at their programs and activities in Greece. I was very proud of the strong Atlantic Council delegation to the Delphi Economic Forum. I was delighted that Ambassador Morningstar was able to speak on energy issues this afternoon at the Laskaridis Foundation, and I hope very much that they will remain strong partners as we seek to build the people to people aspect of the U.S.-Greece relationship.

Since you mentioned energy, what are the news? I mean on the front of Crete we have good news as we heard from the ExxonMobil Vice President at the Delphi Forum, and he also mentioned positive developments in Cyprus. Are you hopeful that Greece could play a more important role in energy in all the region?

Greece is already playing an important role. I made the point at Delphi that arguably Greece and Poland are the two countries that have contributed the most of late to the building of energy resilience and diversification of supplies across Europe. I was very glad to hear Ambassador Morningstar’s declaration today that he believes that Greece should be involved in the Three Seas initiative. I agree with that, and I hope very much that that’s something the governments will be able to work towards.

Now, speaking again of disinformation campaigns, many here in Greece state that we are faced with a hybrid war from Turkey. They’re trying to present their war machine as unique, as superior to that of Greece. We had today our Minister of Defense remark that he’s worried that something bad might happen because of, you know, the behavior of Turkey. What is your opinion?

So, I haven’t seen Minister Apostolakis’ remarks, but I will simply repeat what I said at Delphi, which is that there is great appreciation for the efforts that the Greek government continues to manage, to build a constructive, ally-like relationship between Ankara and Athens. It’s important to NATO. It’s important to the region. We’re going to continue to provide support to these efforts.