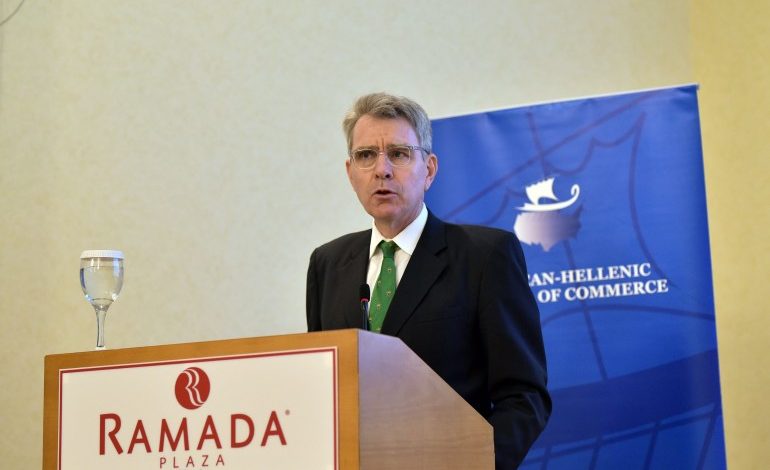 Q. The White House statement on the meeting between POTUS and PM Tsipras talks about “ways to enhance our partnership”. Please provide us with some examples.

I think any time you have two world leaders meeting to discuss the issues that are important to both countries, that’s a symbol of commitment to an existing partnership and a readiness to further enhance it. The White House announcement refers specifically to our defense cooperation, to economic investment, energy security, and the strong cultural ties that we share, and so I expect productive discussions on all these topics. I was just in Washington with Alternate Minister of Defense Vitsas who made it clear that Greece is ready for more U.S. investment, and I’m sure we will be looking for ways to encourage that.  He’s also been a great advocate for Souda Bay, and I’m sure we’ll want to explore ways to make enhanced use of this platform that has benefited both our countries since its establishment in 1969.  We’re also looking forward with great anticipation to the next Thessaloniki International Fair in September 2018, where we’re the country of honor.  I very much appreciated Prime Minister Tsipras’ strong comments last Friday when we were together at the Thessaloniki Summit, and he flagged the United States’ honored country status as a great opportunity to deepen our commercial and investment ties.  I also got to show him our new logo!  Our preparations and commitment for TIF2018 certainly represent an enhancement of our economic partnership, and I know we’ll be hearing more about that before, during and after this visit.

Q.What is the importance of Greece for the United States? It goes beyond Souda?

I can’t emphasize enough the importance of Souda to regional and global peace and security, and it’s notable that I will be back down at Souda Bay just before I fly to Chicago to join the Prime Minister. But that only represents one of the pillars of our alliance. Greece plays a critical role in the EU, in NATO, in the Balkans and the Eastern Mediterranean.  I continue to highlight its potential role as the region’s energy hub.  Our economic relationship and our support for Greece throughout the crisis have also only grown stronger.  I’ve highlighted that, in 2016, Greece was the 10th fastest-growing source of foreign direct investment in the United States, and the United States has been the source of significant investment in Greece.  And much of that investment is in strategic sectors, such as defense and energy.  I’ve recently been to Syros, where there is American interest in the Neorion shipyard, and to Alexandroupolis, where we are discussing the Floating Storageand Regasification Unit, port privatization and the possibility of U.S. LNG imports.  During each trip, I emphasize Greece’s unique geopolitical position and its leadership role on regional issues.  Additionally, I am grateful for the role that the Greek community in the United States plays not just in promoting good economic and political relations between our countries, but also in maintaining the people-to-people and cultural ties that are so strong between our people.  The Calamos investment in Ethniki insurance is a recent example and is one of the largest foreign investments in Greece since the start of the crisis.According to Tourism Minister Kountoura, nearly a million Americans were in Greece this past year and we are hoping to see many more this coming year.

Q. Having travel extensively in all parts of Greece and meeting with people of different economic, social and political status, what is your sense on how Greeks feel about the United States?

Greece is a beautiful and diverse country. Every time I travel, I find myself drawn in to Greece’s unique landscape and history. There’s nothing like the real Aegean blue.  There’s nothing like Thessaloniki, a city that has been for nearly all of its history a cultural crossroads connecting many world civilizations.  And I could go on.  Everywhere I go I have been warmly welcomed and found Greeks to be incredibly gracious and generous hosts, and pragmatic in their views of American policy and — what’s most important — always ready to have a dialogue.  I understand that there has traditionally been a discussion of Greek anti-Americanism and that there are topics where we disagree, but this has not impeded my work.  Greeks have been incredible hosts to me and my wife, to our personnel based in Souda, to the many Americans that come here for tourism and business, and I very much appreciate that.

Q. Throughout the Greek financial crisis, both Government and people were looking for Washington’s support. In practical terms, how the United States can help Greece?

I would reiterate something I said this past week in Washington, at the Association of the United States Army (AUSA) conference, where Alternate Defense Minister Vitsas and Simos Anastasopoulos of the American Hellenic Chamber of Commerce unveiled the first Greek chapter of the AUSA. We support Greece’s full exit from the economic crisis of the last eight years because we understand Greece’s critical role as a regional pillar of stability. Greece has accomplished an historic fiscal adjustment over the last five years, and it’s made significant steps towards reforming its economy and returning the country to sustainable growth. America’s interest is to see that process continue so that the Greek people who have suffered so much over the past eight years can see a positive future for themselves. And so it’s even more important for Greece to be able to promise potential American investors and businesses a favorable climate for doing business, where the legal and bureaucratic systems support them in growth and don’t make things harder. In that respect, the Prime Minister’s trip to Chicago offers a unique opportunity to enlist support from American business.

Q. US administrations were involved at the highest level in efforts to solve disputes such as in Cyprus, Greek-Turkish relations, Greece-FYROM name issue. Will these issues be discussed between the President and the Prime Minister and what your expectations?

We’ve seen some historic steps by the leaders of Greece and its neighbors to re-examine and discuss these issues. For both Skopje and Ankara, we fundamentally agree with Athens that the right trajectory is the European one, bringing them closer to Euro-Atlantic institutions and to the West. On the name issue, this is first and foremost a topic that needs to be developed between Skopje and Athens, authorities in both capitals talking to each other, led by Foreign Minister Kotzias’ dialogue with his counterpart, and we’re pleased to see that’s happening.  On Cyprus, the core goal of the United States,is a bi-zonal, bi-communal federation.  That hasn’t changed at all.  With regard to Turkey, there’s appreciation in Washington for all the efforts Greece is making in its outreach to the Turkish government, whether it’s the expert and senior diplomatic conversations, the Hellenic military talking to the Turkish military, Prime Minister Tsipras’ outreach, or President Pavlopoulos’ visit to Istanbul –the first time in post-war Greek history that a head of state from Greece had traveled to Turkey.  On all these issues, we support the efforts of Greece and its neighbors to come to mutually acceptable solutions, that bring all parties closer together and closer to our Euro-Atlantic institutions and alliances.

Q. What will make this visit a success?

The visit will be a success because of the close relationship between our countries and how closely our interests align in world affairs. I’ve discussed the visit recently with Prime Minister Tsipras, with government Ministers, with opposition leader Kyriakos Mitsotakis, with local and regional officials in Greece, as well as with members of the broader community, and I’ve had many discussions with colleagues and senior officials in Washington when I was there this week. I know that both sides see this visit as a great way to highlight our strategic and enduring partnership. I look forward to opportunities to continue to develop the kind of broad alliance that our two countries are interested in, in a way that builds a stronger Greece and a stronger America, and the visit will definitely be a success both in continuing this discussion and raising it to the highest level of our governments.