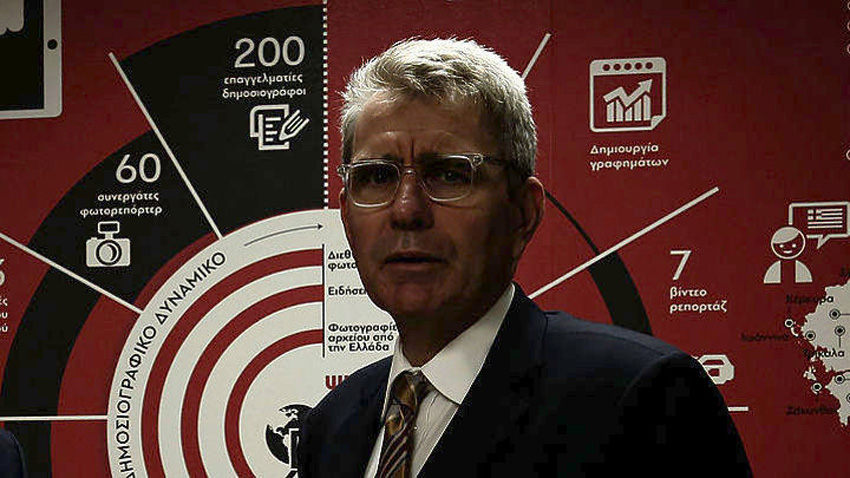 – Mr Ambassador, I would like to describe us your feelings for this important forum.

– It is terrific to be back here in Delphi. It is a beautiful location and it is a globally important conference. I made a point in my remarks that one of my impressions I have this year compared to 12 months ago is that the progress towards economic recovery in Greece is really reflected in the conversation here. We hear a lot more discussion about Greece’s wider regional role. We hear a lot of compelling discussion about how Europe is moving forward with Greece. And a lot of the uncertainty that was part of the conversation 12 months ago has now been resolved. It is important to have so many personalities, global personalities, EU Commissioners, heads of state, here in Delphi talking about the role that Greece plays as a pillar of stability.

– Mr Ambassador, Greece is moving away from the programmes, memoranda etc . The question of the Greek people is what next. What will follow.

– I think that this is up to the Greek people and the Greek government. I have been encouraged from the messages that I have received from the Prime Minister, minister Tsakalotos and others in the cabinet in terms of the recognition that Greece has worked very hard over several years to advance the agenda of reforms and the task for 2018 is to begin to define a package of reforms that is owned by Greece, which does not come from outside, which reflects the desire of the Greek people and the Greek government to build  a healthy foundation for investments and economic progress.

– One of main things is the so-called debt haircut. What do you believe on the issue?

– It is a major issue for Greece and Europe. The view of the US has been clear and was also stated by President Trump when Prime Minister Tsipras was in Washington. We believe that official debt relief should be part of a process of putting Greece on a foundation of sustainable growth. But ultimately this must be resolved by Greece and its European partners.

– What about the geopolitical risks we are facing, the tension with Turkey concerning EEZ , Cyprus etc?

– Greece has lived in a complicated neighborhood for a long time, for hundreds of years. You have a long history with Turkey. I am not worried about geopolitical risks in the big strategic sense. And it very clear to me that Prime Minister Tsipras is committed to a strong and stable relationship and for the US we see Greece as crucial pillar of stability not just with the big neighbor of the east but also with the Balkans, eastern Mediterranean, north Africa and the wider Black Sea region. So I think as a factor for investment I don?t worry. It is very clear that Greece is moving forward. What I do worry about as I said in the conversation just now is a series of unintended events and this is why the diplomacy is so important and why the US is directly and strongly engaged.