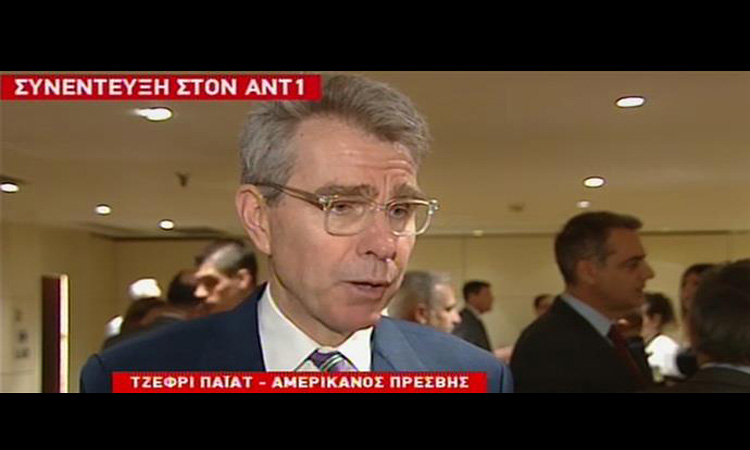 ANTENNA: What about this year? … Do you think that 2018 will be a good year for Greece and the U.S. – Greek relations?

AMBASSADOR PYATT:  I’m very optimistic about this year. It’s a year of America in Greece.  We are focusing especially, of course, on Thessaloniki next September. So, tonight is an opportunity to build on what we did with AMCHAM up in Thessaloniki last week, highlighting the commitment of both governments, Greece and the United States, to leverage the end of the third bailout and the timing of the Thessaloniki International Fair (TIF) to highlight the best of American technology and entrepreneurship but also get the word out to the global audience about how Greece is turning the corner economically.

ANTENNA: As we speak, the mediation effort by Matthew Nimetz is fully fledged, he traveled here in Athens, and he is now in Skopje. What do you foresee? Do you think that we could have a solution before the NATO Summit and what is the American position on these thorny issues?

AMBASSADOR PYATT: I’m not going to make any predictions, but our position is very simple.  We support Matthew Nimetz, we support the UN effort. The best way I can do that right now is by not speculating or saying anything more about where the U.S. is on this.  But the important point is that there is a clear opportunity and that’s the message Matthew Nimetz underlined both here in Athens and in Skopje.

ANTENNA: In recent months we have let’s say some kind of escalations from the Turkish part in the Aegean. They are violating territorial waters, they are provoking dogfights in Greek airspace and at the same time we have the opposition party there claiming eighteen islands. How do you see that escalation? Does this frighten you?

AMBASSADOR PYATT:  The important thing is that the channels of communication between Ankara and Athens remain open. I’m very impressed by the work that Ambassador Paraskevopoulos from the Foreign Ministry is doing with his Turkish counterparts, the dialogue between Admiral Apostolakis and General Akar in Turkey is similarly important. That’s the key. These are two NATO allies, we are committed to our relationship with Greece, we stand with Greece and we made very clear our commitment to Greek sovereignty as well.

ANTENNA:  Now, let’s turn back to the economy. We have seen that we have positive developments. Greece is almost on the way out to the markets.  There is a new chapter in the Greek economy. Do you think that the economy can recover?

AMBASSADOR PYATT: So there is a lot to be hopeful about, you can see it in the markets, you can see it in the bond yields. I see it in the number of American investors that come to the embassy looking for opportunities in Greece. And our embassy, the U.S. administration is committed to doing everything we can to help support Greece as it navigates through this transition, but the key as you alluded to is to sustain the process of reform; to make clear that, even as the bailout process concludes, the Greek government will continue to do the hard work of positioning its economy, advancing reforms to be globally competitive.

ANTENNA: The United States is the honored country in TIF. Could that signify a better future for both our trade relations and also the investments from American investors?

AMBASSADOR PYATT: So President Trump made clear in October our excitement about America as the honored country at TIF, and the embassy is working as hard as we possibly can to capture that opportunity and — exactly as you said — to use TIF as a platform to highlight the best of American technology, American entrepreneurship, but also to get the word out that Greece has tremendous opportunities, that the economy is growing again and that there is a dynamic young startup community which is keenly interested in building bridges with the U.S. There are fantastic human natural resources in this country and the U.S. should be a strong partner as Greece moves forward.

AMBASSADOR PYATT: Great to see you as always!