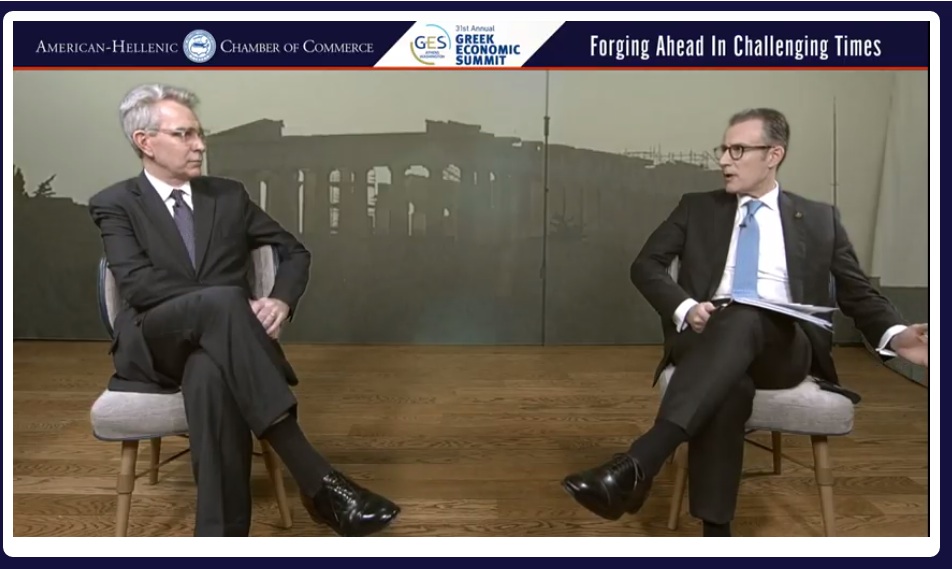 Nikolaos Bakatselos, President, American-Hellenic Chamber of Commerce: This is your fifth GES, and it’s your fourth year here in Greece. Your presence here has been remarkable. For us, you are the architect of the current status of Greek-U.S. relations, and we thank you for that. What would you say has been our country’s biggest achievement during your stay here? And what has been your biggest challenge?

Ambassador Pyatt: So, I think the biggest achievement is easy. It’s that Greece has returned to the status as a normal, prosperous European democracy. I was reading recently President Obama’s memoirs, which were a reminder to me of how much anxiety there was in those days about the state of the Greek economy and the risks that Greece could pull down the whole Eurozone.

I remember vividly my first big visit in this job when President Obama came here in November 2016, along with Secretary of Treasury Lew, and a lot of our conversations with Prime Minister Tsipras was about the state of the economy, European skepticism about Greece’s ability to reform, concerns about the solvency and sustainability of the financial system, concerns about whether Greece could leave the Eurozone. Nobody asks those questions anymore.

I also remember from those days one of my very first meetings with then President of New Democracy and leader of the opposition Prime Minister Mitsotakis, and we talked about the stresses on Greek democracy that a decade of economic crisis had produced. It’s quite remarkable to look back on that and realize how far Greece has come. We’ve had a global financial crisis of almost unprecedented dimensions as a result of the pandemic, and nobody worried that Greece was going to be the domino that pulled down the whole European system. To the contrary, Greece has become a model of good governance, of strong performance, a model that other Europeans aspire to in terms of managing the fantastic challenge that the pandemic has presented. So that’s the easy question.

I think the biggest challenge going forward is to unleash the power of the Greek people and the Greek economy. I think that’s what this government has made progress on. The digital transformation that I discussed in my remarks has a lot to do with unleashing the fantastic energy and ingenuity that you see in the Greek diaspora, that you see among Greek young people, that you see in the startup community, and removing the barriers and impediments that government and bureaucracy can present.

Nikolaos Bakatselos: Well, I think you should know, because you have traveled Greece more than anyone else I know, and you’ve met more people than any of the other U.S. Ambassadors.

Ambassador Pyatt: It’s the best part of my job.

Nikolaos Bakatselos: Speaking of challenges, what has been a challenge for you?

Ambassador Pyatt: So I think it’s related to what we just talked about, which is how to help my colleagues in Washington, in Congress, in the Executive Branch understand how much Greece has changed in recent years.

There have been really important developments, for instance, on the foreign policy side, where Greece has gone from being seen as source of problems to a source of solutions, a net security provider. Initiatives like the Prespes Agreement, like Greece’s thriving relations with Israel, with Egypt, Greece’s facilitation of our military and security relationship. Greece’s emergence as a net provider of security and a source of solutions.

That’s been very important, I think, to the content of our relationship, and I think a presidential transition in the United States presents a particularly important moment for Greece to communicate to my government and to American authorities how Greece can continue to work with the United States to build a stronger transatlantic community, a more stable and prosperous Western Balkans, and an Eastern Mediterranean region which is characterized by cooperation and communication as opposed to conflict and crisis.

Nikolaos Bakatselos: I was going to ask you that, but you answered the question before even hearing it. So thank you for that. I was referring to the new administration in the U.S. You mentioned TIF 2018. I think it’s undoubtedly the greatest milestone in the development of where we are today. What do you think Greece should do in order to continue building on this momentum and enhance the country’s international image? What should we be doing more of?

Ambassador Pyatt: So let me start by again reinforcing on TIF how much, for me, it is a reflection of the value of the partnership between the Embassy and the U.S. government, and AmCham. This was a joint venture, and both of us were Angel Investors in this shared vision. Both of us could have lost a lot, but we actually gained. It goes to the American sporting principle of “Go big or go home.” This was an example of going big.

I think now what’s really important is to deliver success. So these big new investments. We need to make sure that the Microsoft data center investment is a fantastic success, that it moves quickly through the regulatory hurdles that are presented by a big project in a region that crosses different authorities: Ministry of Energy, Ministry of Digital Governance, Ministry of Economy—how the government works together to facilitate that.

Likewise, in Northern Greece, you’ve got a fantastic opportunity with the new Pfizer investment, and what I hear from Albert Bourla and the Pfizer leadership is that it has so far exceeded expectations.

That’s what you want, you want American companies to come to Greece and see, not only is this investment safe, but it’s delivering even better results than expected, so it can be expanded. As those results come in, that will propel further success. Again, it’s a matter of repositioning Greece, and I think the government’s strong performance in managing the pandemic has already helped significantly with that.

For me, every time you see a CNN story or a Washington Post story talking about Greece as an example of successfully responding to the pandemic, following the advice of scientists, working to minimize the economic disruption, that’s money in the bank. We, the AmCham and the Embassy, need to continue to work to build those opportunities.

I’m also very grateful, as I alluded to, that we’re able to build such a strong network in Washington D.C. with President Trump’s economic team, with Secretary Ross, who’s been indispensable, Adam Boehler at DFC, Keith Krach at the State Department, and the whole economic team at the State Department, including Manisha Singh, Frank Fannon, these people are all visitors to Greece, they’ve been indispensable, and I want to work very hard over the next few weeks to ensure that President-elect Biden’s team is able to pick up right where we left off with a very strong foundation that we’ve built.

I remember when Prime Minister Mitsotakis was in the White House in January, one of his messages in the Cabinet Room meeting that we had was his aspiration to see that our trade and investment and economic relationship reaches the same high level as our strategic defense and security cooperation. That is a goal that the United States shares, but we’re only going to get there if we work with the American private sector because we’re not China, you’re not going to have the U.S. government directing private sector investment. It’s going to happen because the market conditions are right and companies see the opportunities here.

Nikolaos Bakatselos: Mr. Ambassador, I have a lot of questions to ask you, and your answers are very interesting. Unfortunately, we’re under a time constraint, so I will just close by saying a huge thank you. This relationship between the Embassy and AmCham has been extremely fruitful, and we look forward to continuing this wonderful relationship with you.