Home Home | News & Events | Ambassador Pyatt to Afghan Members of Parliament in Greece: “You Have the Support of the United States” 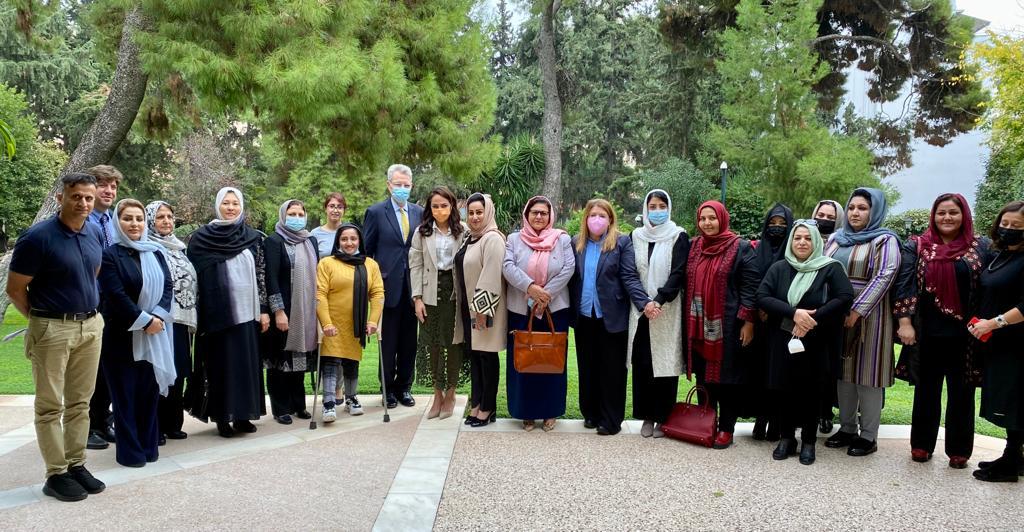 Ambassador Pyatt hosted 15 female Afghan Members of Parliament, Judges, and other civil society leaders, along with five Greek government officials, including Migration Minister Notis Mitarachis, at his residence in Athens on November 9.  The evacuees are in Greece at the invitation of the government of Greece.

Along with Minister Mitarachis, four Greek deputy ministers attended: Migration Deputy Minister Sophia Voultepsi, Education Deputy Minister Zetta Makri, Labor Deputy Minister Domna Michailidou, and Labor Deputy Minister for Gender Issues Maria Syrengela.  Nadina Christopoulou, head of the Athens-based Melissa Network, which is providing support to the prominent women, also participated.  As women holding elected office in Afghanistan, they departed due to concerns about the safety of themselves and their families when the Taliban seized Kabul in August.  There are currently more than 700 prominent Afghan evacuees and family members in Greece.

“Please do not forget the people of Afghanistan,” several of the evacuees implored while expressing their commitment to continue to fight for democracy and the rights of women and children in Afghanistan.  They said they wanted to help their family and constituents in Afghanistan and asked the Greek leaders and Ambassador Pyatt for support in raising their voices to the international community.  Many evacuees expressed gratitude to the government of Greece, NGOs, and the Greek people for their hospitality as they determine their next steps.

Ambassador Pyatt, who also expressed his appreciation for the generosity shown by the government of Greece in hosting the Afghans, told the group, “You have the support of the United States and we will hold the Taliban accountable.  It is very powerful that as upholders of Afghan democracy, you are here in Athens, the birthplace of democracy.  Greece demonstrates that history is not a prison.  It emerged from World War II amid great poverty and social division and today is a modern, prosperous European democracy with women in positions of power, including of course the President of the Republic.  That should be a source of hope.”