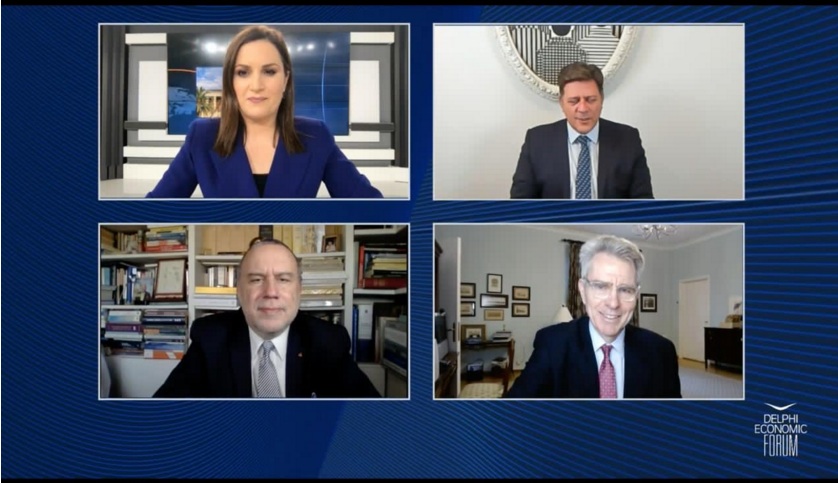 Greece: A Pillar of Stability in a Troubled Region

Alexia Tasouli: Mr. Ambassador, let me ask you first, since your country made this decision to impose sanctions.  What impact might this decision have on U.S.-Turkey relations?

Ambassador Pyatt: Thanks, Alexia.  Thank you for this conversation, and huge congratulations to you and Symeon and Endy Zemenides for putting this event together virtually.  I remember so well last year’s event in Washington DC, and it’s really impressive that we’ve been able to pull this together in the virtual environment with such high-level participation from both sides of the Atlantic, and I think it really reflects the very positive moment we’re at in U.S.-Greece relations.

Before I get to your question, I want to make two points, because it’s a real honor for me to be doing this together with Minister Varvitsiotis and with George Katrougalos, and I just want to remind everybody how far we have come.  It was exactly two years ago this week in December of 2018 that George and I were in Washington DC for the first U.S.-Greece Strategic Dialogue.  And he led the U.S. delegation.  It was one of the first engagements, I think, that we all had with Secretary of State Pompeo on Greece issues.

And if you look at the way that we have built on that foundation over the past 24 months, it really is a model of how to construct an effective institutional framework. And that’s a framework that I’m committed to sustain as we work through a political transition in the United States.  We’ve got the Strategic Dialogue, we’ve got the 3+1 process with Greece, Israel, and Cyprus, we’ve got the new Science and Technology Agreement that Secretary Pompeo and Minister Georgiadis signed in Thessaloniki.  So we’ve got a lot going on, and I hope we can come back to that in a minute.

On Turkey, I’ll just make two quick points.  First of all, the United States has been very consistent.  I even remember the conversation when George was in Washington two years ago, and we talked about the need for Turkey to avoid provocative actions in the Eastern Mediterranean which raise tensions and get us away from what we want, which is to build this region as a zone of cooperation and shared prosperity.

In just a couple of hours, I’m going to be welcoming the U.S. Secretary of Energy, Secretary Brouillette, the last cabinet-level visitor of my Trump administration time here, and I think it’s a fantastic way to cap our efforts, because Secretary Brouillette will be here to draw attention to the amazing progress we’ve made in U.S.-Greece energy cooperation over the past four years, but also the prospect that that cooperation can be expanded in the Eastern Mediterranean.  Greece has been very consistent in suggesting that that cooperation needs and can include all countries that are prepared to observe the standards of international law.  So I think that’s where we want to get to.

I’m going to leave to others the big hypothetical issues that our friend Tom Ellis addressed with Ambassador Burns just a short while ago, but our point is how to get back to cooperation in this region, build a region of prosperity and cooperation, leveraging the exceptional, positive role that Greece has been having, both in the Eastern Mediterranean with all of these new relationships that it’s built with Israel, with Egypt, longstanding relationship with Cyprus, with Lebanon, with Jordan, but also in the Western Balkans, where the Prespes Agreement has unlocked a whole new Greek initiative for the Western Balkans, and where now we’re seeing energy issues develop as a positive aspect of the Western Balkan conversation, too, with the prospect of leveraging TAP, FSRU, IGB to bring non-Russian gas to North Macedonia, to Kosovo to Serbia.  So that’s where we’re going to keep our focus.

Alexia Tasouli:  Mr. Ambassador, you mentioned before that Greece has played a crucial role as a country of stability in a troubled region.  Do you think in this region, we might have more troubles if Erdogan, if Turkey, moves closer to Russia?  Because yesterday, we had Mr. Lavrov, talk about the arrogant attitude towards international law, commenting on the U.S. decision.  So what are the estimations regarding moving Turkey closer to Russia?

Ambassador Pyatt: So Alexia, I think I’ve learned over more than four years in this job now that my skills as a fortune teller are often not very good, so I’m not going to speculate on too much on what might happen in the future.  I thought Foreign Minister Dendias did really well in his conversation with Tom Ellis about everybody’s hopes about the window of opportunity now to allow diplomacy to move forward.  And as regards Minister Lavrov, I would simply point to, first of all, the very strong statement that you saw yesterday from Secretary of State Pompeo characterizing the U.S. government’s view of Russia’s role in the Eastern Mediterranean and this region, and the self-evident point that Russia, and President Putin in particular, has been strongly interested in sowing division within NATO. And of course one instance of that is indeed the provision of the S-400 missile system, which is a direct threat to NATO forces and obviously a grave threat as well to Greek forces.

Alexia Tasouli:  Mr. Ambassador, should the exploratory talks between Greece and Turkey be an open discussion, or should they be limited to the maritime zones? I’m asking about that because Turkey, as you know, claims the disarmament of the Greek islands, and when the casus belli is still active from 1996, and questions the sovereignty of the Greek island.  So what do you think the agenda of the dialogue should be?

Ambassador Pyatt: Alexia, that’s an issue that you have to talk to the Greek government about, and obviously the Turkish government.  Again, I thought Foreign Minister Dendias was very eloquent on these issues in his dialogue a little while ago, and talked about the moment of opportunity, the cautious optimism that everybody feels right now.

For the United States, I would emphasize that we strongly support the return to exploratory talks, but we also understand that that has to be on terms that make sense for two sovereign governments.  I think we’re all helped by the fact that there is a clear roadmap provided by the last exploratory talks which concluded in the spring of 2016, and I think the idea which I understand the governments have been working towards, the starting off point for getting back to those discussions, should be exactly where the work was left in 2016.

I will also note again, because I can’t resist remembering this while we have George Katrougalos here as well, George will remember when we sat down in Secretary Pompeo’s office two years ago during the Strategic Dialogue in front of the fireplace there, I think one of the very first questions that Secretary Pompeo asked, and he was relatively new in office at that point, but one of his first questions to Minister Katrougalos was “What should we be doing about Turkey?” That is, the United States looks to Greece as a partner.  We share the same interests.  We want to see a stable, prosperous neighborhood.

There’s a great deal of confidence in the U.S.-Greece relationship today, and I’m very proud of how we’ve managed to build that across Greek governments and across political parties, and for that matter, across American governments.  And that’s the spirit in which we would approach this prospect of dialogue.  Not coming in and saying, this needs to happen now or that needs to happen now.  Rather, how do we work together, Greece and the United States, two strong democracies committed to the transatlantic relationship, committed to NATO, committed to the open international economy that both of our countries have benefitted from.  How do we work together to consolidate those values across a region that increasingly is challenged?

The Eastern Mediterranean is challenged by our global adversaries, in particular China and Russia, both of whom have very different views of how the world should be organized, and then the Western Balkans, a region challenged particularly by issues of governance and how to continue the project of economic and political reform moving towards European values and Euro-Atlantic institutions.  And I am convinced that the United States has no stronger partner in those tasks than the Hellenic Republic.

Ambassador Pyatt:  Thank you, Alexia.  So, first of all, I obviously can’t speak for President-elect Biden and his team, but I can tell you, as Vice President, Vice President Biden did me the enormous honor of issuing me the oath of office for this job in the summer of 2016.  I got to know him as Ambassador to Ukraine.

I’ve also worked very closely in the past with his national security team: Tony Blinken, the nominee for Secretary of State, Jake Sullivan, National Security Advisor, Nancy McEldowney, the National Security Advisor to Vice President-elect Harris.  These are all people who are deeply, deeply committed to our transatlantic relationship and people who believe strongly that all of the major challenges that the United States faces today, whether it’s the pandemic or climate change or what do we do about China’s exploitative trade and economic policies, what do we do about Turkey’s destabilizing behavior, all of these challenges can only be addressed effectively if we work together as a transatlantic community.