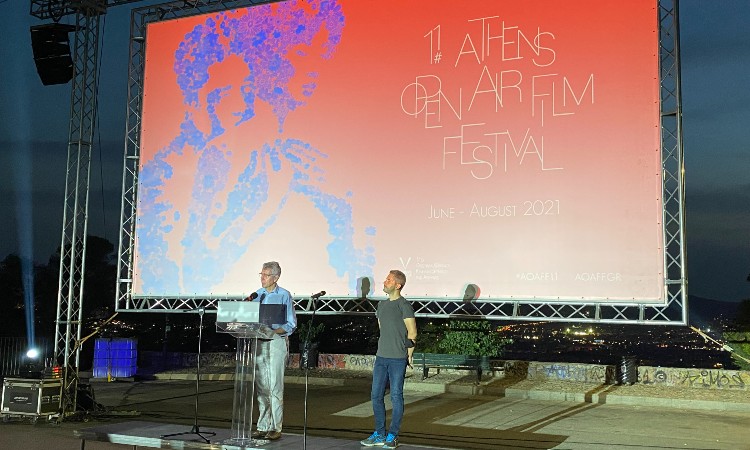 Thank you very much, Lukas. Let me start by saying what a huge pleasure it is for all of us at the American Embassy to be back here on Lycabettus Hill at what I am convinced is the most beautiful open air drive-in cinema in the whole world.

And I want to say a special thank you of course to you, to Maria, Tatianna and the whole team at the Athens Open Air Film Festival for partnering with us in this way.

I should also say thank you to our hosts at the Athens Municipality, of course my dear friend Mayor Bakoyannis who has been such a great leader of this city, but also Vivi Charitou from the Organization for Culture, Sports and Youth who will be speaking in just a second.

I should also say a big thank you, this is a special movie screening. As almost everybody knows, we have an awful lot of American airlines flying into Greece now, largely thanks to the leadership and vision of Tourism Minister Harry Theoharis. And we’re really proud that all three of the American carriers now bringing direct flights from the United States into Greece – Delta, American and United – have all joined up as sponsors this evening. And in particular we will be raffling away two pairs – so four total – round-trip tickets from Athens to the United States and back from United and American Airlines. So thank you very much to both of them.  And then Delta Airlines has offered these very swish looking water bottles that all of our guests are receiving this evening. So a big thank you to the airlines, but let me also say how delighted I am that we have these American carriers as partners continuing to deepen the people to people ties between our two countries.

It is such a pleasure after a very hard year and a half of pandemic to be able to gather face to face again, knowing that Greece, like the United States, has really begun to emerge from this very difficult chapter. I can’t think of any better film to celebrate that, at least in terms of the images of the United States, than Alfred Hitchcock’s North by Northwest which has some really iconic images from the United States, from Mount Rushmore, the famous scene of the biplane chasing down one of the protagonists. So I look forward very much to the film tonight.

I also want to say a quick word about what is going to happen in just a couple of days, which is the American Independence Day, our 4th of July. This 245th anniversary of American independence is particularly important because it coincides with the Greek bicentennial and we’ve been very proud of our partnership with the Greece 2021 Committee and the opportunity the bicentennial has provided to remind everybody in the United States and in Greece of the really unique ties between our two revolutions, the democratic values that we hold in common and President Biden’s commitment to making those ties even stronger.

So I hope everybody enjoys the film tonight. Have a wonderful, wonderful summer, kalo kalokairi. And again, thank you to our partners at the Film Festival for sharing this spectacular setting with all of us. Efcharisto poli!