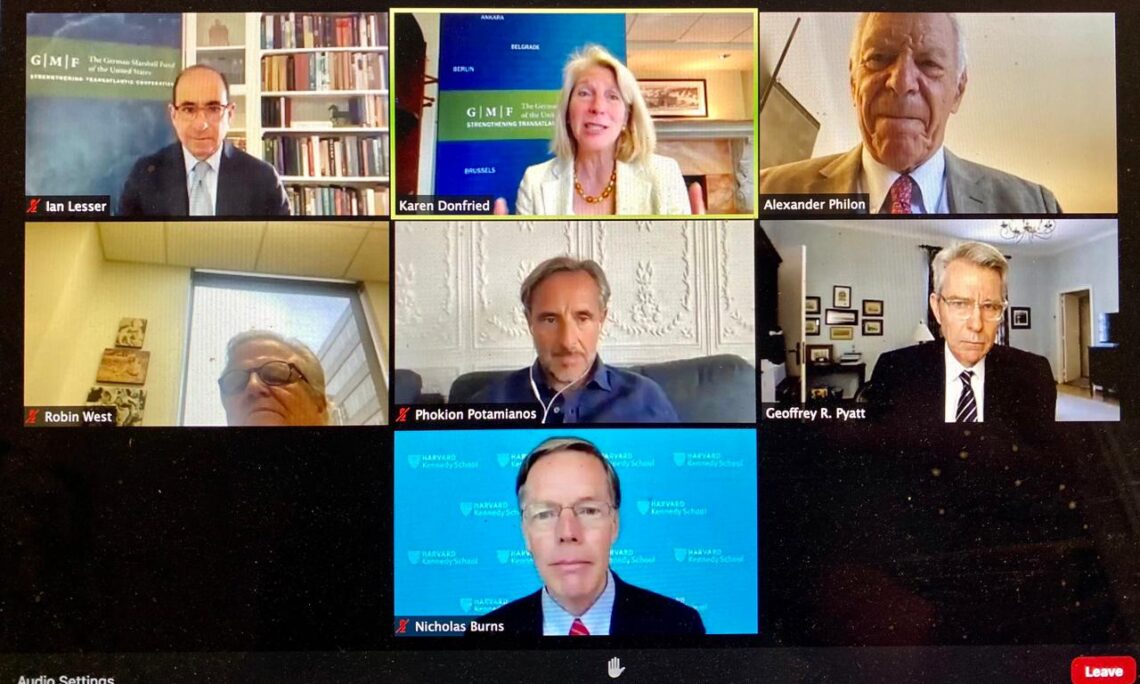 Thank you Karen. It’s wonderful to be here. Let me say what a huge honor it is for me to be part of this inaugural Alexander Philon lecture.

Ambassador Philon has been a friend and an advisor to me and generations of my predecessors, not to mention his many contributions to the transatlantic relationship and U.S.-Greece relations from Washington. I’m really delighted that we’re all able to do this all together.

It’s also a huge honor for me to be speaking in conjunction with this presentation by Ambassador Nick Burns. Nick has been a mentor and a friend for many years. For my generation of the Foreign Service, he really is the personification of what it is to be an effective American diplomat.

But I really didn’t know how much I would owe to him until I arrived here in Greece. And I have to say even after five years, I stopped being surprised when I go into a new community or a village somewhere, and right after I introduce myself as the American ambassador whomever I’m talking to immediately asks, “Do you know Ambassador Burns?” It’s an iron law of this profession that we all stand on the shoulders of our predecessors, but Nick continues to loom very large in the U.S.-Greece relationship. I can’t think of anybody better to address this topic today.

Let me say, thank you Karen to you, and to Ian for the tremendous partnership that we have had with the German Marshall Fund in putting together this Mediterranean Strategy Group. Some of the ideas that we’ll be focusing on over the next couple of days Ian and I began chewing on two years ago in a session of the strategy group in Naples. Certainly in the two years since then, if anything the importance, the relevance of the issues has grown, but also the contributions that Greece is able to make in the context of a really thriving U.S.-Greece bilateral relationship, which I’m proud to say is arguably the best it has ever been in the modern history of our relations. And I have a clear mandate from President Biden and from the Administration to raise it to an even higher level. So it’s a very exciting time to be the American Ambassador to Greece on all of the issues we work together on.

I think one of the things that really has helped to condition and shape the environment for this partnership is Greece’s emergence from a very difficult decade of economic crisis, the confidence that that has inspired, but also Greece’s return to the strategic stage as a military partner for the United States, playing a critically important role in the Eastern Mediterranean and the Western Balkans. But also as a diplomatic partner, working with Greece and Israel and Cypress to pursue our shared interests with those democracies, working with Egypt, reaching into the Gulf and even now to India, which is another area where I know Ambassador Philon also has great experience.

I should flag in the context of the discussions we’ll have over the next couple of days the critical importance of the China question as a global priority for the Biden-Harris administration. I think here in Greece, we’re in a very good position to continue to work together on these issues, a government which believes passionately in the transatlantic relationship but also has confidence in the United States.

It is the Chinese themselves who called Greece and the port of Piraeus the dragon’s head of the Belt and Road initiative in Europe. But I think it’s quite striking, if I look back over the past year and a half or so in particular, to see how smart Prime Minister Mitsotakis’s government has been in its approach to China. Whether that’s on the question of critical infrastructure, and Greece has really been ahead of the curve in recognizing the importance of the 5G decision. But also the way we work together.

I remember when I arrived here five years ago, everybody was talking about the port of Piraeus. I think Senator Menendez raised it with me in our very first call before I came out here. The big game changer on that score, which I hope we can talk a little bit about over the next couple of days, is the Development Finance Corporation of the United States and the critical role that we have been able to carve out, creating a positive narrative around U.S. investment in Greece and the way in which we worked with the Greek government, especially to encourage U.S. investors to look at critical sectors like critical infrastructure like ports and power grids.

I should also note, and maybe finish up on this in setting the stage, for all of us, the past 14-15 months have been shaped significantly by the pandemic and the response to that. I would just share in particular with those who are not here in Greece my enormous admiration for the way in which the Greek government has tackled this issue, the way in which the United States and Greece have been able to work together, the special role played by Albert Bourla, the CEO of Pfizer who is a very proud son of Thessaloniki. And Pfizer has been one of my key partners in working to lift the profile of American investment in Greece. But precisely because Prime Minister Mitsotakis and his government had a smart science-based approach to the pandemic and because Greece and the government used the opportunity to accelerate moves in areas like digital transformation of the economy, Greece is positioned to emerge from this global crisis stronger than most. Prime Minister Mitsotakis is now faced with the challenge of how to allocate about 32 billion Euros in European recovery funds for Greece. That will have a critical role in shaping the Greek economy in the years ahead.

Conveniently for me, for the United States, the Prime Minister’s priorities line up perfectly with U.S. priorities. The priority first on the green economy and sustainability. And second on things digital. So we’ve got a tremendous partnership with the Prime Minister on that. And you’re starting to see a return to some sense of confidence and optimism about where Greece is going.

So I’m feeling very bullish about the bilateral relationship. It has been quite an experience for me to watch this over the past five years and to see the enormous progress that we’ve made on issues like our military and security cooperation which is almost unrecognizable from what it was a few years ago. But I’m also confident that we haven’t reached our limits yet, and that there’s much more that we can do in continuing to work with this government to build one of our strongest relationships in all of Europe.

Thank you for the tremendous partnership with GMF. And I look forward very much to seeing some of the insights that emerge from the next few days of discussions on our critical set of issues.